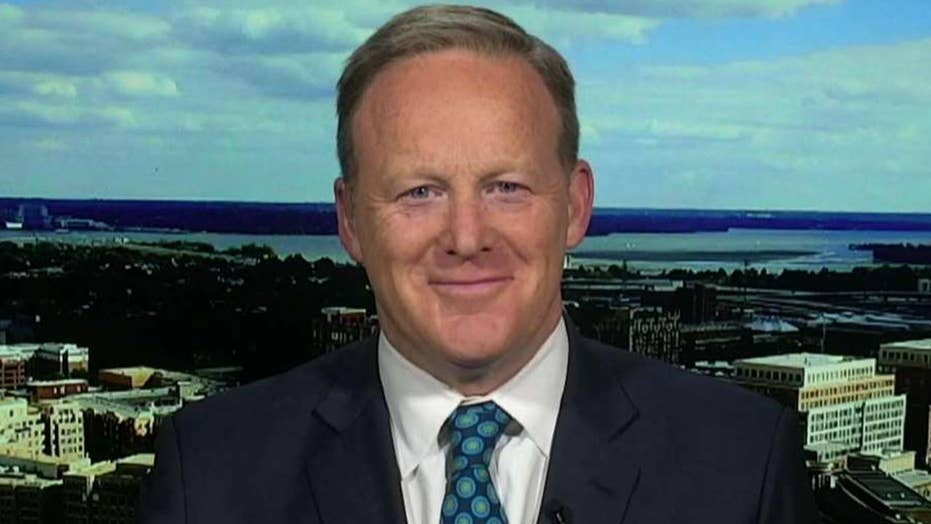 “The problem with the Democrats, they dug a hole so deep, they don’t know how to get out of it now and they’re doubling down,” Spicer said.

He made the comments as congressional Democrats stepped up calls for Special Counsel Robert Mueller's Russia report to be released in full -- even preparing subpoenas for the report -- despite complaining just over a year ago that Republicans were jeopardizing “sources and methods” with their decision at the time to release a memo on alleged government surveillance abuse.

Republicans, many of whom also want the report released, are deferring to Attorney General Bill Barr who says he needs time to vet with his team what information can and cannot be made public. Democrats have shown little patience for that process, blasting Barr for releasing only a four-page summary and imposing an April 2 deadline for Barr to turn over the full report to Congress, demanding “full transparency.”

Barr said he would provide the report, which is more than 300 pages long, to Congress by mid-April. He said the report will exclude sensitive information, including material that “by law cannot be made public.”

“In the meantime, Barr should seek court approval (just like in Watergate) to allow the release of grand jury material,” House Intelligence Committee Chairman Adam Schiff tweeted on Friday.

Barr's summary said the special counsel found no evidence of collusion between members of the Trump campaign and the Russians during the 2016 presidential election. Schiff has faced GOP pressure to step down from his post for his repeated allegations of collusion during the course of that investigation, but fellow Democrats have stood by him.

“I think that we can’t let Democrats off the hook as to where they started this dialogue, which is that we need to protect Robert Mueller, he has the highest degree of integrity and professionalism and we need to let the chips fall where they may with respect to his investigation. The chips have fallen. Mr. Mueller has made it very clear that there was no collusion,” said Spicer.

He added, “The reality is, is that he issued his report, it said there was no collusion, our attorney general Barr has said he will release it to Congress somewhere around mid-April and they’re still not satisfied.”

Spicer said Barr doesn’t have to release the report to Congress according to law. He said the issues with it include the fact that the report contains grand jury testimony and classified information, which the attorney general “has to protect by law just as he would with any other citizen.”

“So Attorney General Barr is going above and beyond what he is required to do and I think Democrats recognize that they’re playing a losing hand and so that the only way to do this is to pivot further away from what they originally started at, which was just allowing Mueller to investigate this issue. Once he came up with a conclusion that wasn’t what they wanted, they had to pivot to something else,” said Spicer.

On Monday, President Trump tweeted, “Now that the long awaited Mueller Report conclusions have been released, most Democrats and others have gone back to the pre-Witch Hunt phase of their lives before Collusion Delusion took over. Others are pretending that their former hero, Bob Mueller, no longer exists!”

Schiff, D-Calif., is one of several Democrats who blasted then-House Intelligence Committee Chairman Devin Nunes, R-Calif., during the last Congress for releasing a GOP memo on alleged abuses of the Foreign Intelligence Surveillance Act (FISA) in February 2018. The memo described the unverified Trump "dossier" as critical for obtaining surveillance warrants to spy on a Trump campaign aide.

The GOP memo, which was also four pages long, was released March 24 in an unredacted and declassified format, with White House approval.

House Speaker Nancy Pelosi, D-Calif., said at the time that Trump's decision to release an unredacted version of the memo was a danger to national security.

Schiff, who was the ranking member of the committee at the time, joined with Democrats on the committee to declare the GOP memo “risks exposure of sensitive sources and methods for no legitimate purpose.”

Spicer said once the conclusions of the report didn’t come out the way Democrats wanted, “then they entirely flipped themselves on their argument that they have been espousing for the longest time.”

He added, “Here we are with the Democrats not getting an outcome that they like on the Mueller report so what do they do? They say suddenly that this individual, Bob Mueller, that they revered, his work isn’t good enough, it needs to go further, we need to investigate more, we need to see all the other underlying evidence. Where is the concern about them undermining the attacks?  The conclusion was clear, there was no collusion, but since they won’t accept that, they continue to attack the process and the person.”