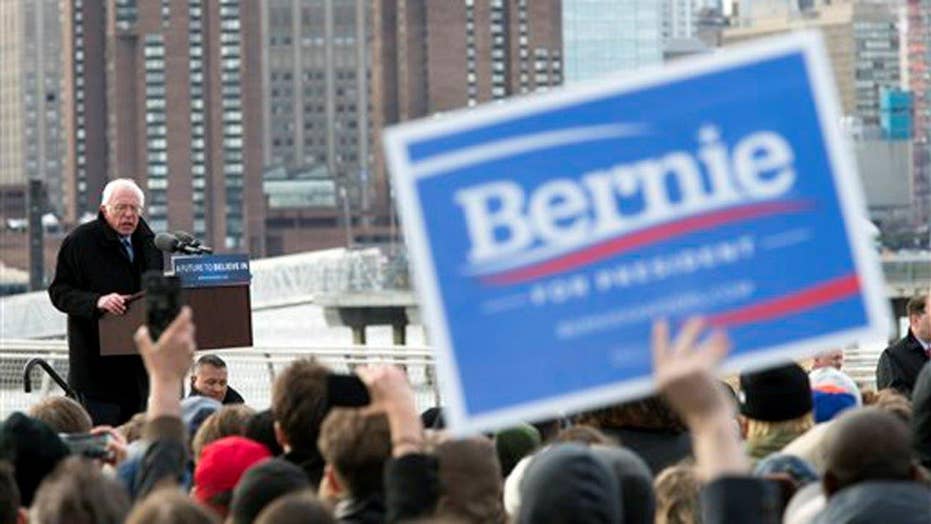 “Absolutely we can” win the nomination without winning New York, the Vermont senator and Brooklyn native told NBC’s “Meet the Press.”  “I want to do as well as I can.”

Sanders made the comments just hours after the release of a Fox News poll that shows him trailing Clinton 37-to-53 percent among likely New York Democratic primary voters, with the primary on April 19.

And he told ABC’s “This Week” that he and his campaign “want to win” New York and think they at least “got a shot to win.”

Sanders is trying furiously to close Clinton’s 1,756-to-1,058 delegate lead, with his campaign suggesting last week that it could do well enough in the remaining primaries to at least keep Clinton from winning the 2,383 delegates needed to secure the nomination and perhaps become the nominee in an open convention in July.

(The only remaining caucus is for Democrats in North Dakota, on June 7.)

Sanders' insurgent campaign has won eight of the last nine contests including the Wyoming Democratic caucuses on Saturday.

Sanders held four campaign events Saturday in New York City and one on Sunday, an outdoor rally on Coney Island in Brooklyn.

The Sanders and Clinton camps appear to have ended their heightened attacks on each other’s candidates in recent days, including suggestion that each is not qualified to be president.

However, Sander continued to attack Clinton on Sunday in working class Brooklyn, tying her campaign to support from political action committees and Wall Street, just across the East River.

On the Republican side, front-runner Donald Trump holds a big lead in New York over rivals Texas Sen. Ted Cruz and Ohio Gov. John Kasich, according to the new Fox News poll.

Trump has 54 percent support from likely GOP primary voters, followed by  Kasich with 22 percent and Cruz with 15 percent.

The billionaire businessman also leads in the overall delegate count with 743, followed by Cruz with 545 and Kasich with 143. A total 1,237 delegate are needed to secure the nomination before the July convention.

“We will accumulate delegates, and we will go into the convention, we believe, with momentum,” Kasich told CBS’ “Face the Nation.”

That Cruz is last in some New York poll is no surprise.

In a debate in January, Cruz accused Trump of having “New York values,” which he sees as “socially liberal or pro-abortion or pro–gay marriage [with a] focus around money and the media.”

After Trump’s loss to Cruz on Tuesday in Wisconsin and a slow week of campaigning, Trump returned to the trail Sunday with a signature airplane hangar rally, in conservative leaning Rochester, N.Y.

“We going to start winning again, let me tell you,” he told the crowd.

Trump also argued the delegate-awarding process is a "crooked” because he has won more states and voters than Cruz, who is picking up more delegates.

“We need a system where voting means something,” he said.

However, he expressed confidence that Trump will win enough delegates in the remaining primaries, which he argued makes delegate wrangling and related issues ahead of a possible contested convention more secondary.

“That's the side game because the only game I'm focusing on right now is getting delegates,” Manafort told NBC. “And the games that have happened … are not important to the long-term game of how do we get to 1,237” delegates.

Clinton campaign chairman John Podesta was confident about Clinton winning in New York, where she was elected U.S. senator, and suggested Sanders’ hot streak was coming to a close.

“Look, (Sanders) is competing vigorously here. So are we. But people in New York remember what a great job (Clinton) did for them.”

Podesta argued Sanders' run was essentially in Western state caucuses and that the next six contests are East Coast primaries with more diverse electorates.

“We think that when you get to bigger states, diverse states, primary states, we're going to do very well,” he said.

Fox News’ Christopher Snyder contributed to this report from Rochester.