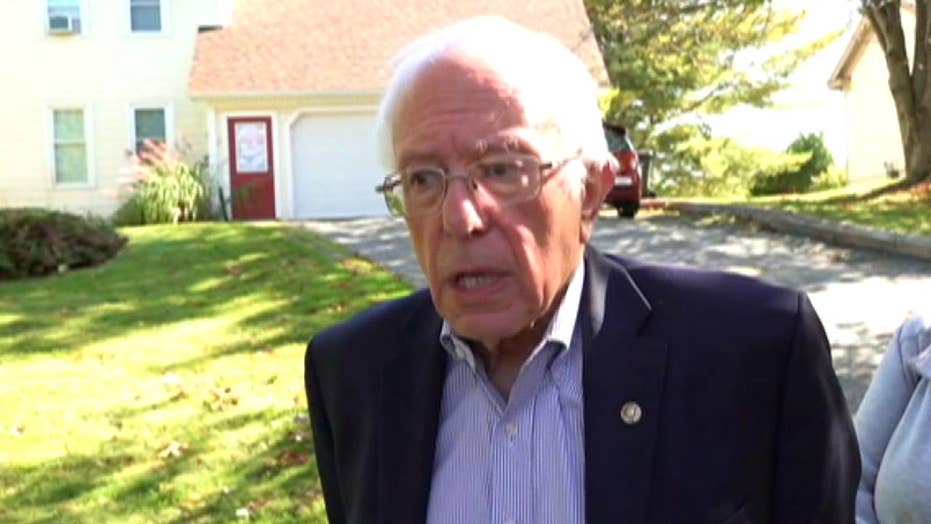 Bernie Sanders talks to the press in Vermont

Senator Sanders discusses his health with the press.

For a second straight day, Democratic presidential candidate Sen. Bernie Sanders is trying to allay speculation that he would be cutting back on his campaign appearances after suffering a heart attack last week.

The 78-year-old independent senator from Vermont emphasized at the beginning of a video he sent to supporters and posted on Twitter on Thursday that “I am feeling great. I am getting my endurance back and I look forward to getting out on the campaign trail as soon as possible.”

And to hammer home the point, the populist lawmaker, who’s making his second straight White House bid, concluded the video by highlighting that “I am feeling really good. I’m getting stronger every day. We’re going to be out there on the campaign trail. We’re going to be in the debate in Columbus, Ohio next week.”

SANDERS SAID HE MISSPOKE ON SLOWING PACE OF HIS CAMPAIGN

Sanders has been off the campaign trail since being hospitalized early last week after he experienced chest pains at an event in Nevada. He’s been resting at his Vermont home since being released from the hospital on Friday.

Sanders, who's the oldest candidate in either party running in the 2020 presidential campaign, told reporters outside his home earlier this week that he would be slowing the pace of his normally frenetic campaigning.

“We were doing in some cases five or six meetings a day, three or four rallies and town meetings and meeting with groups of people,” he explained. “I don't think I'm going to do that. But I certainly intend to be actively campaigning. I think we can change the nature of the campaign a bit. Make sure that I have the strength to do what I have to do."

Those comments made headlines, sparking speculation about Sanders’ endurance.

In an interview Wednesday with NBC News, Sanders said: "I misspoke the other day. I said a word I should not have said and media drives me a little bit nuts to make a big deal about it.”

In Wednesday’s interview, Sanders also pushed back against criticism that his campaign was not transparent about the heart attack. When he was hospitalized, his campaign initially said it was because of a blockage in the senator’s artery.

"That's nonsense," Sanders said. "I don't know what people think campaigns are, you know we're dealing with all kinds of doctors and we wanted to have a sense of what the hell was going on…I think we acted absolutely appropriately."