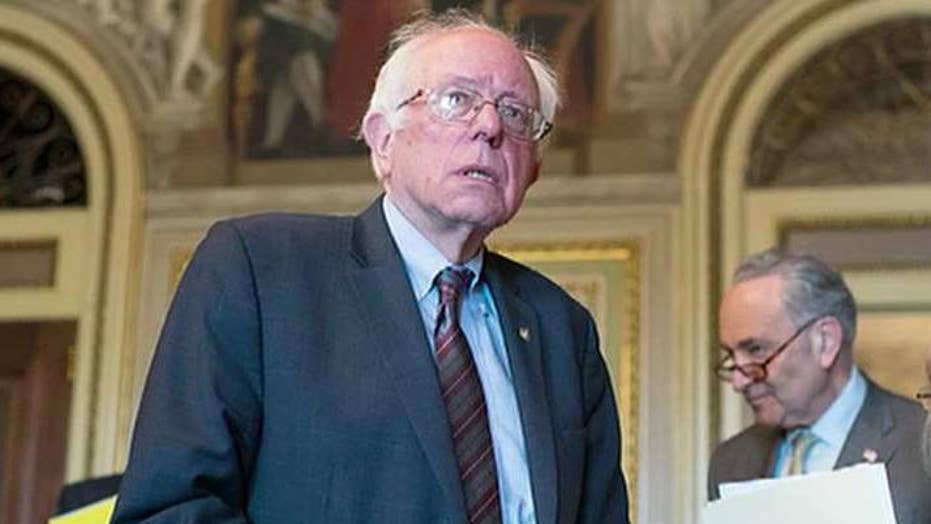 Democratic presidential hopeful Bernie Sanders had two stents inserted due to a blocked artery; Dr. Oz weighs in on the seriousness of Sanders' heart problem.

Sen. Bernie Sanders, I-Vt., backpedaled Wednesday on statements he made a day earlier about the pace of his presidential bid following his heart attack last week, telling NBC News that he was ready to "get back into the groove of a very rigorous campaign."

In Sanders' first sit-down interview since he had two stents inserted into his chest to clear a blocked artery, Sanders said he's feeling "a hell of a lot better than I did a week ago."

"I have no pain, I'm out walking now, getting back to work, feel good," he told NBC's Harry Smith in a clip from the interview, which is scheduled to air Wednesday night.

Sanders was at a campaign rally in Nevada last Tuesday when he began complaining of chest pains.

"They did a few tests and the doctor there said, she said, 'You're having a heart event,' and it just struck me. I could not believe it," Sanders said.

After Sanders was released from a Nevada hospital on Friday, the campaign disclosed that the 78-year-old had suffered a heart attack. However, Sanders pushed back on claims that his campaign tried to hide or conceal his health ailments from voters.

"No I don't accept that," Sanders said. "That's nonsense and I think that sometimes, you know, I don't know what people think campaigns are. We're dealing with all kinds of doctors and we wanted to have a sense of what the hell was going on really. So the first thing that we're trying to do is understand what's going on and not run to The New York Times and not have to report every 15 minutes. This is not a baseball game. So I think we acted absolutely appropriately."

"No apologies," he added.

Sanders told reporters Tuesday outside his home in Burlington, Vt., that he "certainly intends to be actively campaigning" but will "change the nature" and frequency of rallies and events to "make sure I have the strength to do what I have to do."

“We were doing, you know, in some cases five or six meetings a day, three or four rallies and town meetings and meeting with groups of people,” Sanders said about his campaign prior to his heart attack. “I don’t think I’m going to do that.”

Sanders said he "misspoke" when he suggested he would slow his pace on the campaign trail, but his wife, Jane O'Meara Sanders, said Wednesday that her husband has postponed all campaign events until next Tuesday when he will head to Ohio for the fourth Democratic debate.