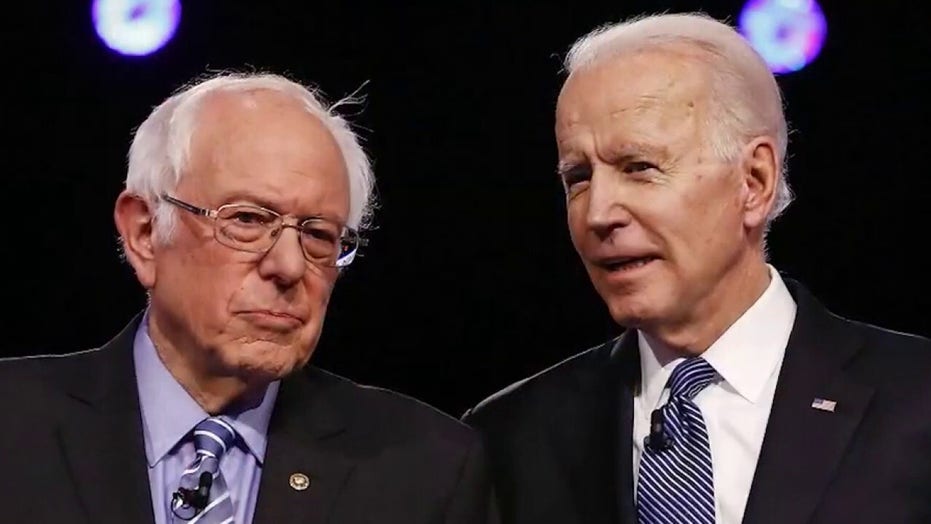 Coronavirus concerns front and center as voters head to the polls in Illinois, Florida and Arizona

Restrictions placed on public gatherings have raised serious questions about the safety of voting in person; Peter Doocy reports from Philadelphia.

Democratic presidential candidate Bernie Sanders offered his own proposals for addressing the ongoing health and economic crises caused by the coronavirus pandemic, acknowledging it will cost "an unprecedented amount of money” of at least $2 trillion.

A significant chunk of that money would be in the form of a monthly payment to American households of $2,000.

That follows other similar proposals: Sen. Mitt Romney, R-Utah, has proposed giving $1,000 to every American adult, former Democratic candidate Andrew Yang has pushed the idea of a monthly $1,000 check for Americans, and the White House has also discussed sending out checks to Americans.

“In this moment of crisis it is imperative that we stand together,” Sanders said in an address streamed on his campaign website, recognizing that “in this unprecedented moment, this will require an unprecedented amount of money.”

Some of Sanders's other suggestions were temporary versions of policies he has become known for, such as free health care and student loan relief.

“In the midst of this crisis,” he said, “we must empower Medicare to cover all medical bills during this emergency.”

Sanders noted that while a "Medicare-for-all" bill is impossible at this point in time, a temporary measure that would cover all Americans during the current pandemic would help people get the treatment they need.

Sanders also highlighted the need to “increase the ability of test kits for coronavirus and the speed at which the tests are processed.” He also called for additional resources, such as reopening closed hospitals, having medical students and retired medical professionals help out, and for the federal government to “work aggressively with the private sector,” which is already happening as far as making testing available.

The $2,000 monthly payment was just part of Sanders’ approach to the economic problems posed by the outbreak. Another feature of his plan is to “waive all student loan payments for the duration of the emergency” so to provide some economic relief to those worrying about student loan debt.

He also called for setting up a government agency to monitor businesses to make sure they do not unfairly profit off the crisis. Any corporation that does profit, he said, should not be permitted to lay off workers, and he would also like to see a ban on buybacks and bonuses for executives.

At the intersection of the health and economic issues are Sanders’ proposals regarding the pharmaceutical industry. He seeks to prevent price gouging by pharmaceutical companies, and should a vaccine for COVID-19 become available, he said it should be free.

Sanders said he will present his proposals to Senate and Democratic leadership, as lawmakers continue to address the ongoing crisis.

The Democratic presidential candidate's address came in the waning hours of voting in Florida, Illinois and Arizona for those states' primaries.