Tucker on Schumer Hating Moment When Trump Berated Him

Tucker on Schumer Hating Moment When Trump Berated Him

Senate Democratic Leader Chuck Schumer, D-NY, welcomed the news of Interior Secretary Ryan Zinke's upcoming departure from the Trump cabinet, calling him "toxic" and declaring that the "swamp cabinet will be a little less foul without him.”

“Ryan Zinke was one of the most toxic members of the cabinet in the way he treated our environment, our precious public lands, and the way he treated the government like it was his personal honey pot. The swamp cabinet will be a little less foul without him,” Schumer said in a statement.

President Trump announced Saturday that Zinke will be stepping down from his post at the end of the year, amid a number of ethics controversies.

“Secretary of the Interior @RyanZinke will be leaving the Administration at the end of the year after having served for a period of almost two years,” he tweeted. “Ryan has accomplished much during his tenure and I want to thank him for his service to our Nation.”

Trump added that he would announce Zinke’s replacement by the end of next week.

Zinke, a former Montana congressman and U.S. Navy Seal, had been dogged by ethics complaints related to his travel as well as a real estate deal in his home state involving a foundation he created and the chairman of the energy giant Halliburton that does business with Interior. 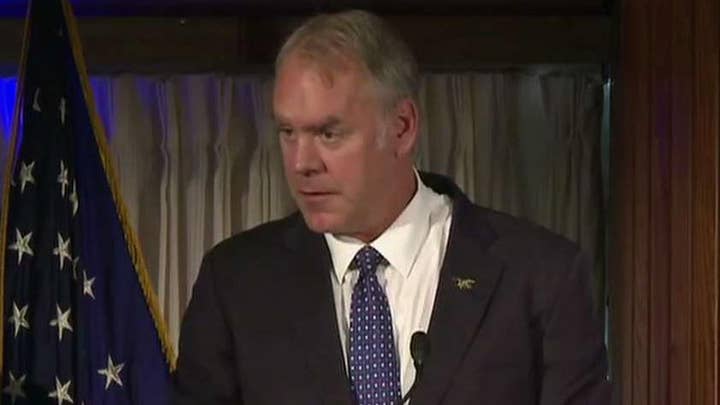 The 57-year-old Zinke also raised ethical concerns when he blocked two Connecticut tribes from opening a casino and redrew boundaries to shrink a Utah national monument. Kendall's team cleared Zinke in a separate probe into his air travel, faulted him for violating department regulations when he allowed his wife to ride in government vehicles, and said there were insufficient records to determine whether Zinke's staff re-assignments broke policy.

In a statement Saturday afternoon, Zinke indicated that the allegations were part of the reason he departed from the administration.

"I love working for the President and am incredibly proud of all the good work we’ve accomplished together. However, after 30 years of public service, I cannot justify spending thousands of dollars defending myself and my family against false allegations," he said.

President Trump indicated to reporters at a post-Election Day White House press conference on Nov. 7 that Zinke's fate was in doubt.

“We’re looking at that, and I do want to study whatever is being said,” Trump said. "I think he’s doing an excellent job, but we will take a look at that, and we’ll probably have an idea on that in about a week.”

But two days later, Trump told reporters he had no immediate plans to fire Zinke. "No, I’m going to look into any complaints,” he said.

Zinke had also raised the ire of Democrats from the policies he enacted as head of the Interior Department. He has reduced the boundaries protecting natural momuments for drilling and mining. In November, he blamed "radical environmentalists" for California wildfires, accusing them of preferring to “burn down the entire forest than cut a single tree.”

Zinke's departure marks the latest shakeup in the Trump administration. Last week Trump announced that Chief of Staff John Kelly would be resigning by the end of the year, and announced Friday that Director of the Office of Management and Budget Mick Mulvaney would step in as acting chief of staff.