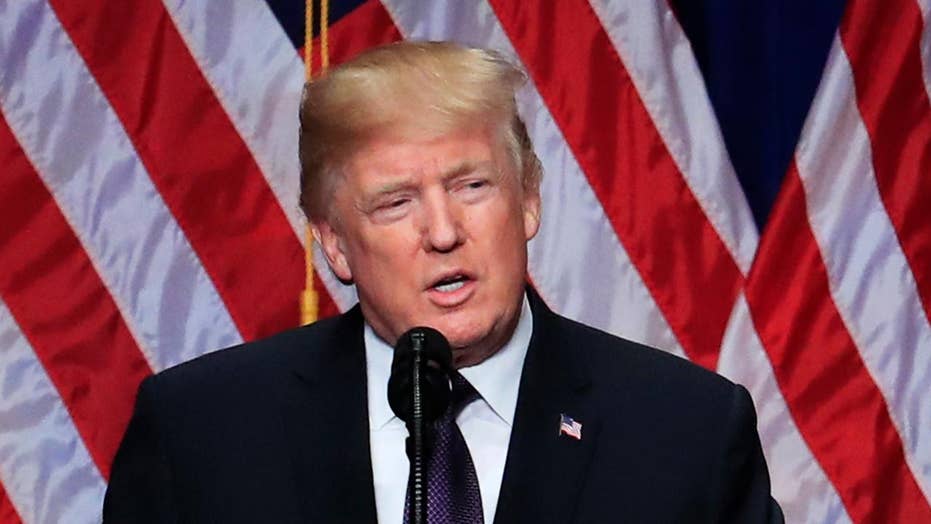 The president's strategy is based on protecting the American people, promoting American prosperity, preserving peace through strength and advancing American influence; John Roberts has the roundup on 'Special Report.'

President Donald Trump's "America First" strategy, detailed in a speech Monday, featured strong words about China and Russia, countries that the president described as "rival powers" to the U.S.

But despite Trump's stated goal of building "a great partnership with them," both countries seemed less than enthusiastic about the plan in responses issued Tuesday.

A document outlining Trump's plan accuses Russia of using "subversive measures" to weaken America's credibility and European governments, specifically calling out Moscow for "its invasions of Georgia and Ukraine."

The document doesn't specifically mention Russian meddling in last year's U.S. presidential election. But it warns that Russia and China are more effectively using cyberattacks and online propaganda, saying the U.S. and allies must counter the misinformation.

Dmitry Peskov, a spokesman for Russian President Vladimir Putin, told reporters Tuesday that the mentions of Russia struck Moscow as "imperial" and showed "an aversion to a multipolar world."

Peskov, however, said Moscow was encouraged by calls to cooperate with Russia in areas that could be beneficial for the U.S.

McMaster said Russia was engaged in supporting groups on both the left and right of the political spectrum, with the goal of creating tension between the groups to undermine democracy.

Meanwhile, China, like Russia, also is determined to reshape the world according to its own ideals, Trump said Monday.

"Chinese dominance risks diminishing the sovereignty of many states" in its region and beyond, the Trump administration's strategic document says.

The strategy calls for stronger traditional alliances and new partnerships in Asia amid a "geopolitical competition between free and repressive visions of world order."

But the decision to label Beijing a rival in a national security strategy report reflects a "victory of hardliners" in Trump's administration, China's official news agency warned Tuesday.

Trump's security statement marked a revival of the anti-China rhetoric he used during the 2016 U.S. presidential campaign, the Financial Times reported, noting that Trump had been more restrained in remarks on China while trying to convince Beijing to intervene in the North Korea nuclear crisis.

The remarks also signaled that Trump may be relying more on U.S. Trade Representative Robert Lighthizer, known as an economic nationalist, than on globalists such as Gary Cohn, head of the White House National Economic Council, the FT reported.