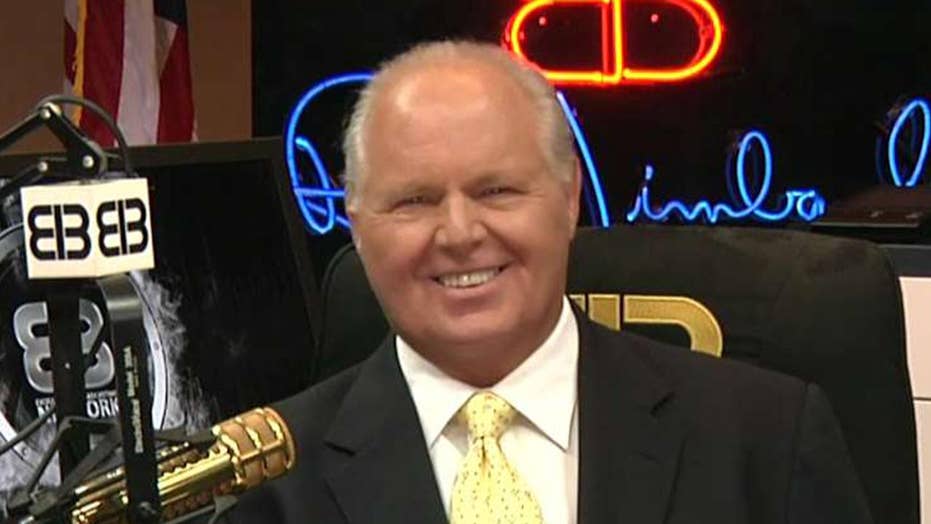 Rush Limbaugh: Democrats like Schiff and Swalwell are trying to keep the collusion hoax alive

Syndicated radio talk show host Rush Limbaugh, giving an extensive interview to Fox News' Bret Baier on Thursday, called for the president to declassify everything related to the Mueller report and the Foreign Intelligence Surveillance Act (FISA), close down the U.S. border, shut down immigration and pardon everyone charged in the Mueller investigation.

“And then pardon everybody that has been abused by this unnecessary investigation.”

The conservative host called the Russia investigation a “manufactured coup” and said accountability is needed from the Obama administration to the media.

“There needs to be an investigation into this. There needs to be accountability for everybody who participated in this from people high up in the Obama administration all the way down and including most of the mainstream media,” Limbaugh said.

Limbaugh continued: “The people of this country were told their president was a traitor. They were assured their president had colluded and stolen the election. None of it happened. And the special counsel has known there was no collusion since before the investigation began. There has never been any evidence of it.”

Limbaugh criticized Democrats for continuing to talk about Russian collusion and not being satisfied with the four-page Mueller report summary released Sunday by Attorney General William Barr. Democrats have contended that that summary could not convey the full scope of Mueller's findings, detailed in a report that sources say is several hundred pages long.

REP. SWALWELL: TRUMP COULD HAVE STILL COLLUDED DESPITE MUELLER REPORT

“It's just continuing [Rep. Eric Swalwell, D-Calif.] and [Rep. Adam Schiff, D-Calif.] are lying to the American people because they can't give it up.”

The Democrats are not laughing they're not having a good time they don't seem like they're enjoying life.

“There isn’t any assimilation happening here,” Limbaugh said, comparing recent immigrants to immigrants of the past.