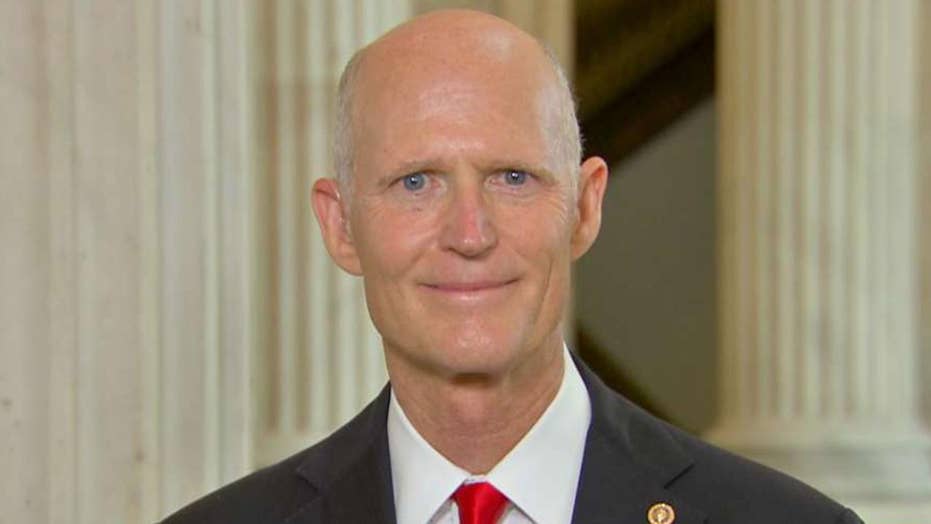 President Trump is doing his job and the Sunshine State is going to reward him, Florida Sen. Rick Scott says.

Florida Senator Rick Scott believes President Trump has the Sunshine State in the bag for 2020.

Scott, a member of the armed services committee, told "America's Newsroom" Thursday why he thinks Trump will sweep the critical battleground state.

"I think President Trump's going to have a big win for this reason," Scott said. "The economy's on fire."

The Florida senator added: "He supports the military, which is a big deal to our state. We have 20 military bases. He is focused on the things that people care about. They care about border security. If you look at what Secretary Azar is doing trying to get drug prices down. The president is doing his job and the people will reward him with a big win in 2020."

The former governor said Trump has all the right policies for the "melting pot" of the Southeast state, including the economy, combatting Russia, keeping Americans safe, staying out of the Iran deal, and making sure disputed Venezuela President Nicolas Maduro leaves the country.

Scott's comments come on the heels of a raucous Panama City Beach rally in which the president rallied his base and announced $448 million in hurricane recovery funds to communities affected by last year's Category 5 Hurricane Michael.

"In the wake of the terrible storm, this extraordinary community pulled together and showed the world your unbreakable spirit," Trump told supporters. "Today, I'm doing the most allowed by law to support the people of Florida. Because of the severity of the storm -- Category 5 -- we will have the federal government pay for 90 percent of the cost in many circumstances."

Scott said the United States needs to put a naval blockade on Cuba to help combat the "manmade" crisis caused by Maduro, aided by Cuba, Russia, China, Iran, and Hezbollah.

"We'll have Syria in this hemisphere. We have all the bad players. If we don't do it now we'll have to do it later. Cuba is causing all the problems in Latin America," Scott added. "We should have stopped it in the early 60s and we didn't."