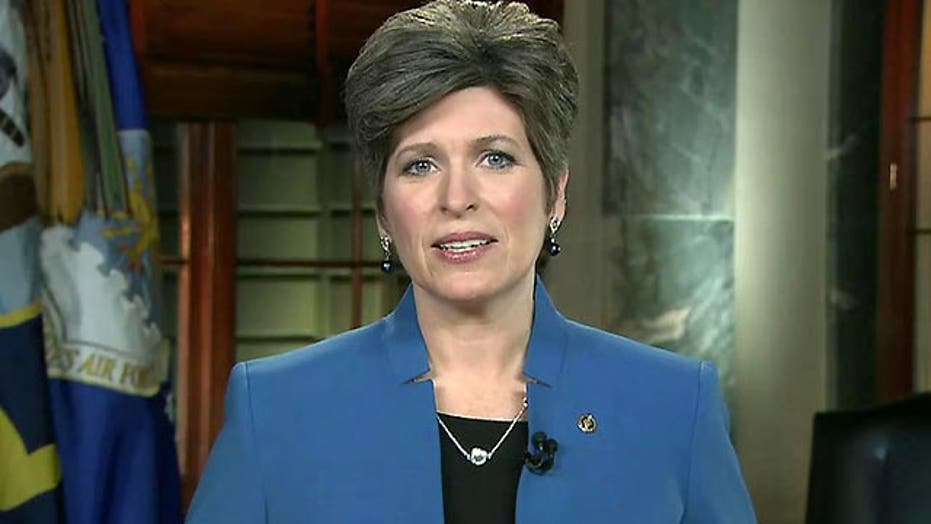 Sen. Joni Ernst: We heard the message you sent in November

Freshman senator from Iowa delivers the Republican Address to the Nation

Sen. Joni Ernst hammered home the idea of a new Republican Congress ready to champion the middle class in America as well as go after terrorists abroad in the Republican response to President Obama’s State of the Union address Tuesday night.

In contrast to Obama's rosy view on the economy, Ernst spoke of the struggle that still exists.

“Americans have been hurting,” she said, and cited concerns over stagnant wages, lost jobs and higher monthly insurance bills.

The freshman senator from Iowa, with less than a month of experience in Washington, told Americans during her nine-minute rebuttal that the GOP is “working hard to pass the kind of serious job-creation ideas you deserve” that she said includes building the controversial Keystone XL pipeline.

Ernst also said Republicans will prioritize American concerns. She called on Obama to work with her party to simplify the tax code by lowering rates and eliminating unspecified loopholes. She also called on him to ease trade barriers with Europe and Asia.

Obama, who gave the annual speech before a Republican-controlled Congress, focused on the state of the economy and its impact on the middle class. He also took on climate change, cyber threats and terrorism abroad.

Ernst also cited the recent terror attacks in France, Nigeria, Canada and Australia in her rebuttal and said lawmakers need to come up with a “comprehensive plan” to defeat terror groups like Al Qaeda and the Islamic State as well as those radicalized by them.

“We know threats like these can’t just be wished away,” she said.

Ernst, a former colonel in the Iowa Army National Guard, won one of the toughest election challenges last year, beating Democrat Bruce Braley. She is the first woman elected to the office from Iowa and the first combat veteran to serve in the Senate.

Ernst has served 21 years between the Army Reserve and National Guard. She spent 14 months in Kuwait in 2002-2003 as part of Operation Iraqi Freedom. In a nod to her military roots, she wore camouflage pumps.

She also said veterans deserve better care and “nothing less than the benefits they were promised and a quality of care we can all be proud of.”

Ernst, who ran on a promise of bringing change to Washington as well as an attention-grabbing campaign ad where she said she “grew up castrating hogs on an Iowa farm” and vowed to cut the pork in Washington if elected, said lawmakers have too often “responded with the same stale mindset that led to failed policies like ObamaCare.”

“It’s a mindset that gave us political talking points, not serious solutions,” she added.

But not everyone bought Ernst’s message.

Brad Woodhouse, president of Americans United for Change, said  it was Republicans who are blocking efforts to pass legislation in Washington.

“Ernst decried ‘stagnant wages and lost jobs’ but made no apologies for her fellow Republicans in Congress who have blocked all Democratic efforts to raise the minimum wage, to create millions of jobs rebuilding America’s crumbling roads and bridges, and to stop rewarding corporations that outsource U.S. jobs with tax breaks,” he said in a written statement.

Clawson, who won a special election seven months ago by marketing himself as “the outsider for Congress,” drew on his strong conservative grassroots base during his response. He stressed that people were key to achieving the American dream, not the government.