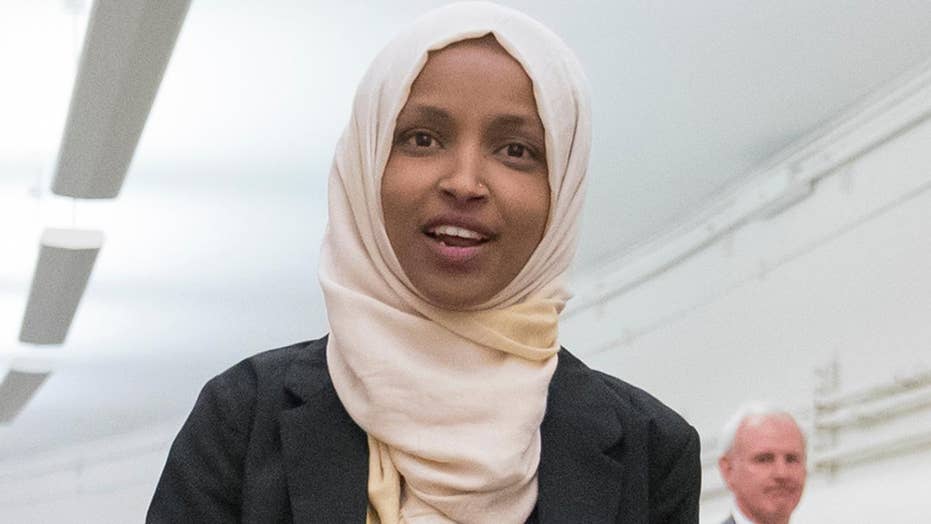 Rookie Democratic Rep. Ilhan Omar, fresh off igniting an intra-party uproar with comments widely viewed as anti-Semitic, took a swipe at former President Barack Obama, saying in an explosive interview the 44th president's message of "hope and change" was a "mirage" and blasting his administration's drone and border detention policies.

Omar, D-Minn., took aim at the president's famed slogan, while further criticizing the Democratic Party for “perpetuating the status quo,” in the interview with Politico.

“Recalling the ‘caging of kids’ at the U.S.-Mexico border and the ‘droning of countries around the world’ on Obama’s watch," Omar charged that Obama "operated within the same fundamentally broken framework as his Republican successor,” the piece reads.

Omar is then quoted as saying: “We can’t be only upset with Trump… His policies are bad, but many of the people who came before him also had really bad policies. They just were more polished than he was.

“And that’s not what we should be looking for anymore. We don’t want anybody to get away with murder because they are polished. We want to recognize the actual policies that are behind the pretty face and the smile.”

The comments came after the passage Thursday of a broad anti-bigotry resolution prompted by Omar's prior comments about Israel. The resolution and the drama surrounding its passage exposed chasms in the Democratic caucus regarding Israel and marked a coup of sorts for a tight-knit band of House freshmen who – in a matter of hours – were able to shift the spotlight away from Omar’s allegedly anti-Semitic remarks and refocus on issues like Islamophobia and pro-Israel lobby AIPAC.

“The week was supposed to start off with a rebuke of Omar's anti-Semitic comments and it ended up turning into a long list of other hateful actions,” House Republican Whip Steve Scalise, R-La., told Fox News on Friday, saying the final product “fell short of addressing the real problem.”

But the broadside delivered at Obama is highly unusual for any Democrat, especially one who has been in the House for two months and has already ticked off party elders with her outspokenness.

The House resolution, following a week of Democratic infighting over the language, was approved on a 407-23 vote. The measure originally was drafted in response to Omar, a freshman Democrat from Minnesota, suggesting last week that Israel supporters want U.S. lawmakers to pledge “allegiance” to the Jewish state – which was widely condemned as echoing the age-old “dual loyalties” smear against Jewish politicians.

Yet after Speaker Nancy Pelosi faced a rebellion in the ranks amid concerns the resolution would unfairly single out Omar, a Muslim, and increase security threats against her (she was recently the subject of an inflammatory poster at the West Virginia capitol falsely tying her to the 9/11 attacks), the resolution was overhauled.

The result was a broad rebuke of bigotry, including anti-Semitism as well as “anti-Muslim discrimination and bigotry against minorities” perpetrated by white supremacists and others. The resolution condemned “dual loyalty” accusations, but did not mention Omar by name.

The fight exposed deep divisions in the party. But on the 2020 campaign trail, heavyweights came to Omar's side. Vermont independent Sen. Bernie Sanders, who was raised Jewish, defended Omar, arguing that “we must not, however, equate anti-Semitism with legitimate criticism of the right-wing, Netanyahu government in Israel.

“Branding criticism of Israel as automatically anti-Semitic has a chilling effect on our public discourse and makes it harder to achieve a peaceful solution between Israelis and Palestinians,” she wrote in a statement obtained by Fox News.

Many Democrats, while strong supporters of Israel, have concerns with the country’s long-time prime minister, Benjamin Netanyahu, and his government’s treatment of Palestinians.

There was a similar response from Sen. Kamala Harris of California, who called out all instances of bigotry and worried about possible violence directed at Omar.

“You can both support Israel and be loyal to our country,” she said. “I also believe there is a difference between criticism of policy or political leaders, and anti-Semitism."