GOP Sen. Rand Paul said Friday he was "successful" in preventing the Senate coronavirus relief bill from including a provision that would provide Paycheck Protection Program assistance to Planned Parenthoods across America, Fox News has learned.

The senator’s office on Friday said he "forced" Democrats to remove the provision that would have allowed every Planned Parenthood across America to receive funds through the PPP, which "was always intended for small businesses."

"Democrats knew this was never about COVID relief or helping small businesses," Paul, R-Ky., told Fox News. "It was a shameless attempt to fund their radical agenda on the taxpayers’ backs, and I was successful in preventing that from happening by stopping these funds from going to abortion mills."

According to Paul’s office, the House-passed version of the $1.9 trillion coronavirus relief package included a provision that would treat individual Planned Parenthood locations as "separate and distinct entities," making them eligible for federal assistance under the PPP.

Paul’s office pointed to the "original congressional intent" of the PPP — established last year at the onset of the coronavirus pandemic — which was to limit large and well-financed groups from receiving a loan and instead provide relief to small businesses affected by COVID-19. 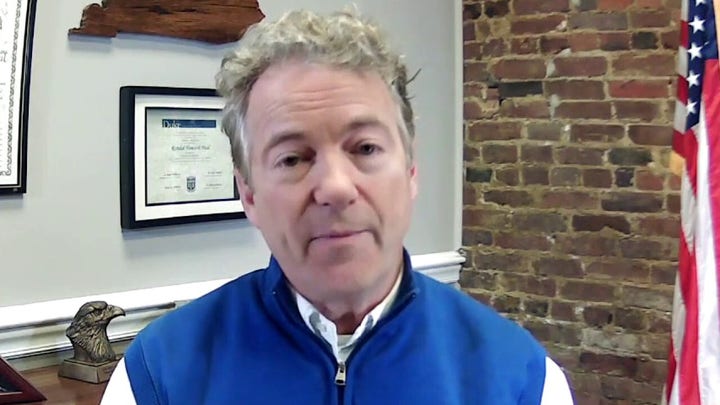 Sources told Fox News that Senate Democrats had planned to waive affiliation rules for nonprofits to provide paycheck protection loans to Planned Parenthoods in the House version of the bill, but that Paul "strenuously" argued to the Senate parliamentarian that the waiver would "only benefit" Planned Parenthood.

Fox News has learned that before the parliamentarian was able to rule on the arguments presented, Democrats filed an updated version of the bill that did not include the provision, in what Paul’s office called "a concession that avoided setting a precedent."

A spokesman for Senate Majority Leader Chuck Schumer, D-N.Y., did not immediately respond to Fox News' request for comment when asked about Paul's push.

Jacqueline Ayers, the vice president of government relations & public policy at Planned Parenthood Federation of America, told Fox News though, that the "provision had nothing to do with Planned Parenthood 501(c)(3) organizations."

"The local Planned Parenthood affiliates that previouslyobtained loans made available by the CARES Act were eligible under theaffiliation rules defined by the Small Business Administration," Ayers said.

"While Congressional Republicans continue to focus on baseless politicalattacks in the middle of a public health crisis, Planned Parenthoodhealth centers across the country continue to provide essential healthcare in their communities."

Ayers added: "Now is the time for everyone to cometogether to address this pandemic and pass much needed COVID-19relief, not for uninformed political attacks on access to essentialhealth care."

House Democrats passed the nearly $2 trillion coronavirus relief bill on a mostly party-line vote over the weekend, sending the massive package to the Senate as lawmakers rush to provide a fresh round of aid before key unemployment programs expire.

Senate Democrats are pushing to pass its own version of the bill this week, which will look different from the House proposal—most notably excluding the $15 minimum wage increase after the parliamentarian ruled that its inclusion violates budget rules.

HOUSE OKS $1.9T CORONAVIRUS BILL -- WITH 2 DEMOCRATS VOTING AGAINST IT

Democrats are using a procedural tool known as budget reconciliation to pass the legislation without any Republican support and are therefore limited as to what provisions they can include. And given their thinnest-possible majority in the Senate, the party needs to secure the support of all 50 members across the ideological spectrum, with Vice President Kamala Harris then able to cast a tie-breaking vote.

If the Senate passes a different version of the emergency aid bill, the House will either have to vote on that measure — a potentially risky move with progressives threatening to withdraw their support unless it includes a $15 minimum wage — or the two chambers will need to meet to draft a final bill.

The proposal contains a third $1,400 stimulus check for Americans earning less than $75,000 annually, increases jobless benefits to $300 a week through the end of September, expands the child tax credit to up to $3,600 per child, includes $350 billion for state and local government funding and allocates $170 billion for K-12 schools and higher education institutions to cover reopening costs.

Most Republicans are expected to vote against the massive spending measure, which will push the nation's already staggering debt to nearly $30 trillion if passed. Congress already passed about $4 trillion in relief measures under former President Donald Trump, pushing the deficit to a record $3.1 trillion in fiscal year 2020 — which doesn't include the $900 billion relief package lawmakers approved in December.

Lawmakers are racing to send the legislation to Biden's desk before March 14, when more than 11 million Americans will lose their jobless aid when two key federal jobless aid programs created a year ago under the CARES Act — and extended in the $900 billion relief package that Congress passed in December — lapse.