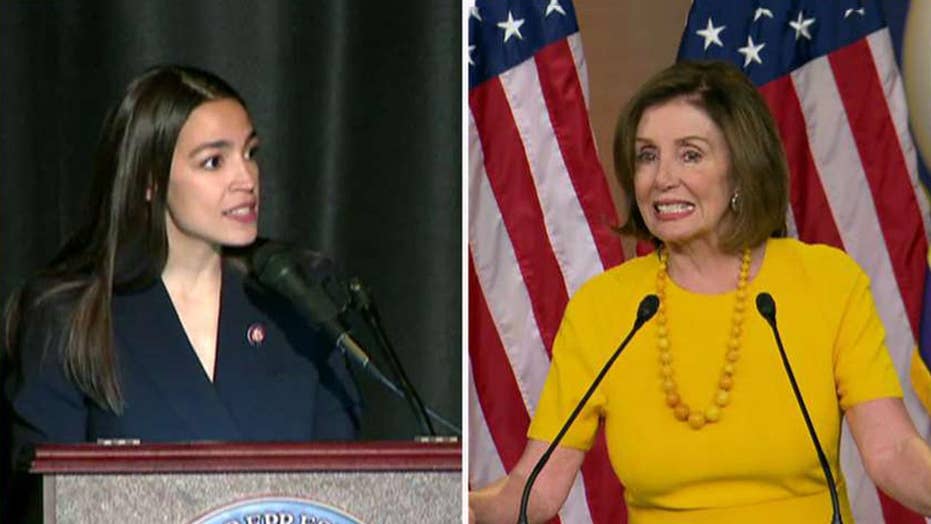 Alexandria Ocasio-Cortez says Nancy Pelosi is 'singling out' members of Congress; reaction and analysis on 'The Five.'

Rep. Pramila Jayapal, D-Wash., the co-chair of the House Progressive Caucus, suggested Friday that House Speaker Nancy Pelosi, D-Calif., hurt the progressive cause when she downplayed the influence of Rep. Alexandria Ocasio-Cortez, D-N.Y., and other freshman lawmakers.

Pelosi told The New York Times last week that Ocasio-Cortez and Reps. Ilhan Omar, D-Minn., Ayanna Pressley, D-Mass., and Rashida Tlaib, D-Mich., "have their public whatever and their Twitter world, but they didn’t have any following. They’re four people, and that’s how many votes they got.”

“I don’t think those comments were helpful to a broader picture of how we build progressive power in the House and what it looks like relative to overall Democratic power,” Jayapal said, according to HuffPost.

Jayapal made the remarks while appearing at Netroots Nation, an annual gathering that features panels and training for activists. The Wall Street Journal reported that Pelosi's name was booed when mentioned during the panel discussion that included Jayapal. But in spite of her knock on Pelosi, Jayapal also reportedly defended the Speaker as a "master strategist" even as some took issue with her decision to marshal a GOP-backed border funding package through the House.

That legislation appears to be at the root of the feud as Ocasio-Cortez, Omar, Tlaib and Pressley -- a group known as the "squad" -- all voted against the measure despite being vastly outnumbered by members of their own caucus.

Sen. Jeff Merkley, D-Ore. was among those on Friday's panel who pushed back on Pelosi's decision to take up border funding from his chamber. The House "failed" "to carry its weight to restore the values of America," Merkely reportedly said.

Many Democrats in the Senate had approved the GOP-backed border funding bill under the assumption that Pelosi would force it into a conference committee by passing Democrats' own version. “We lost all the leverage that the progressives like Rep. Jayapal had worked so hard to get. It just went down the tube," Merkely said.

PELOSI ADMONISHES TWEETING ATTACKS ON FELLOW DEMS: DON'T 'EXPECT US TO THINK THAT THAT IS JUST OK'

But according to Jayapal, the Senate created an untenable situation for the House by approving funding on a bipartisan basis. “We cannot have the Senate passing these big bipartisan votes because it affects what happens in the House,” she reportedly said.

Jayapal also defended Speaker Pelosi by emphasizing the importance of votes. "In the end, the power of how many votes you can garnish for whatever position you're pushing for is what is really important," she said. The Washington congresswoman and Rep. Mark Pocan, D-Wis., have reportedly requested a meeting to discuss with Pelosi the relationship between the Democratic Caucus and more progressive members of the party.

While the House considered the funding, the "squad" released a statement that called for a hold on funding for immigration enforcement and accusing authorities of "killing innocent children." Ocasio-Cortez similarly blasted House Democrats for passing legislation with measures to provide accountability on the way authorities used federal funds.

Her response seemed tame, however, compared to chief of staff, Saikat Chakrabarti, who tweeted that moderate Democrats were comparable to segregationalists who dominated the party in bygone days.

A similar tweet from Chakrabarti provoked a bold condemnation from the House Democratic Caucus, members of which reportedly requested that Pelosi call for Democrats to stop tweeting attacks like Chakrabarti's on each other.

Ocasio-Cortez threw gasoline on the fire by telling The Washington Post last week that the “persistent singling out” by the speaker was “outright disrespectful” and affected “newly elected women of color.” That in turn prompted a scathing rebuke by Rep. William Lacy Clay, D-Mo., a senior member of the Congressional Black Caucus, who accused Ocasio-Cortez of playing "the race card," a charge Ocasio-Cortez denied on Friday.

"Now I have said publicly," Jayapal remarked that same day, "I don't typically find Pelosi to be someone who disrespects members. I've never felt disrespected as a woman of color by Nancy Pelosi."

COLIN REED: YES, PELOSI, AOC FEUD IS BIG BUT THESE TWO PEOPLE ARE THE REAL THREAT TO THE SPEAKER

Jayapal previously said, however, that she could relate to Ocasio-Cortez's concerns.

“It's just a constant thing we deal with as women of color. It's always harder when it's perceived as coming from your own side, whether that was how it was intended or not," she said earlier this week. She also suggested Pelosi wasn't used to a group like "the squad" having bigger Twitter followings than her.

"Just days after joining with Republicans to give Trump billions more to harm immigrant families, it's deeply concerning that senior Democratic Party leaders and their aides have been escalating attacks on new leaders in the party who have been rightfully advocating a stronger approach to holding the Trump administration accountable to human rights abuses being committed on the border and against immigrants," the groups said.

"With ICE raids occurring this weekend, deaths of children at the border camps, and a continued blank check for the administration's racist deportation machine, we will be focusing on the real crisis at hand and we urge Democratic leadership to do so as well."