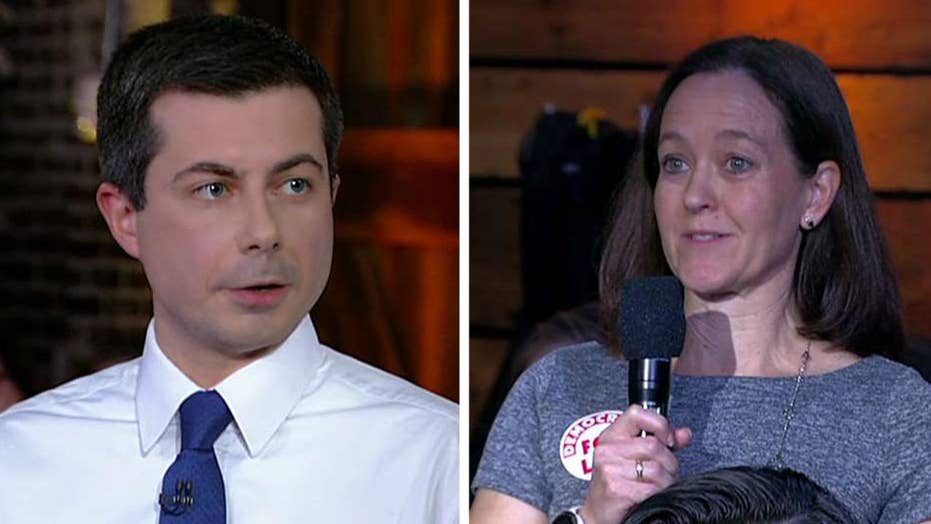 Democratic presidential candidate Pete Buttigieg refused to say whether he would be open to language in the Democratic platform that would be more inclusive to pro-life members of the party, during a tense moment at Fox News' town hall Sunday night.

A pro-life Democrat named Kristen Day asked Buttigieg whether he wanted the support of "people like me" during the forum moderated by Fox News' Chris Wallace -- and pressed the mayor over whether he would support a change in the Democrats' platform to emphasize that it is a "big tent" party and welcomes pro-life members. He would not commit to such a move.

"I'm not going to try to earn your vote by tricking you. I am pro-choice, and I believe that a woman ought to be able to make that decision," Buttigieg said to applause from the rest of the audience. "The best I can offer is that if we can't agree on where to draw the line, the next best thing we can do is agree on who should draw the line, and in my view, it's the woman who's faced with that decision in her own life."

Wallace then asked Day if she was satisfied with the answer Buttigieg gave. She said she was not.

"He didn't answer the second part of my question, and the second part was: The Democratic platform contains language that basically says, 'we don't belong, we have no part in the party because it says abortion should be legal up to nine months, the government should pay for it,'" Day said. "In 1996 and several years after that there was language in the Democratic platform that said 'we understand that people have very differing views on this issue but we are a big tent party that includes everybody and therefore we welcome you -- people like me -- into the party so we can work on issues that we agree on.'"

'I'm not going to try to earn your vote by tricking you.'

"And so I may have my views, but I cannot imagine that a decision that a woman confronts is going to ever be better, medically or morally, because it's being dictated by any government official," he said.

The former South Bend, Ind., mayor's comments touched off a debate over Democrats' abortion stance and whether or not the party should moderate it.

Ilyse Hogue, president of NARAL Pro-Choice America, drew a distinction between people who personally would not get an abortion and people who support pro-life policies like Day, whom she called "anti-choice."

"The question is a good reminder to differentiate between people who feel personally pro-life and those who are anti-choice like Kristen Day," she tweeted. "The latter category believes it's fine to force their beliefs on others through law. The former does not."

Katie Pavlich, an editor for the conservative Townhall.com, took the Buttigieg comments as a signal that he believes pro-choice views should be a litmus test for Democrats.

"Pete Buttigieg just told a pro-life, Democrat *woman* she has no place in today’s Democrat Party. All she asked for was a recognition there is diversity of thought on the issue and that it be put in the platform language. He said no and told her to deal with it," she wrote on Twitter.

Susan B. Anthony List, one of the largest pro-life groups in the U.S., also weighed in, criticizing Buttigieg's handling of the town hall moment.

"Doubling down on abortion extremism, last night Mayor Buttigieg could not identify a single instance where he would limit abortion, or even acknowledge room for debate on the issue within the Democratic Party," a statement from the group said. "The modern Democratic Party is the party of abortion on demand through birth, paid for by taxpayers, and even infanticide... The choice for voters is clear. Only one candidate will uphold the compassionate consensus of the American people when it comes to abortion: President Donald Trump."

The 2016 Democratic platform leaves little wiggle room on the issue, promising that Democrats will support judges who will "protect a woman’s right to safe and legal abortion" and advocating for funding and support of abortion in developing countries.

It continues: "We will continue to oppose—and seek to overturn—federal and state laws and policies that impede a woman’s access to abortion, including by repealing the Hyde Amendment."

The Hyde Amendment is a bar that prevents federal funds from subsidizing abortion in almost all cases. It has received generally bipartisan support in Congress since the 1970s. Buttigieg's fellow moderate in the 2020 race, former Vice President Joe Biden, was pressured into changing his longtime stance on the rule last year.

"I make no apologies for my last position and I make no apologies for what I'm about to say," Biden said on Thursday at an event in Atlanta, defending his change of heart. "I can't justify leaving millions of women without access to the care they need and the ability to exercise their constitutionally protected right."

Buttigieg's campaign did not immediately respond to a request for comment.