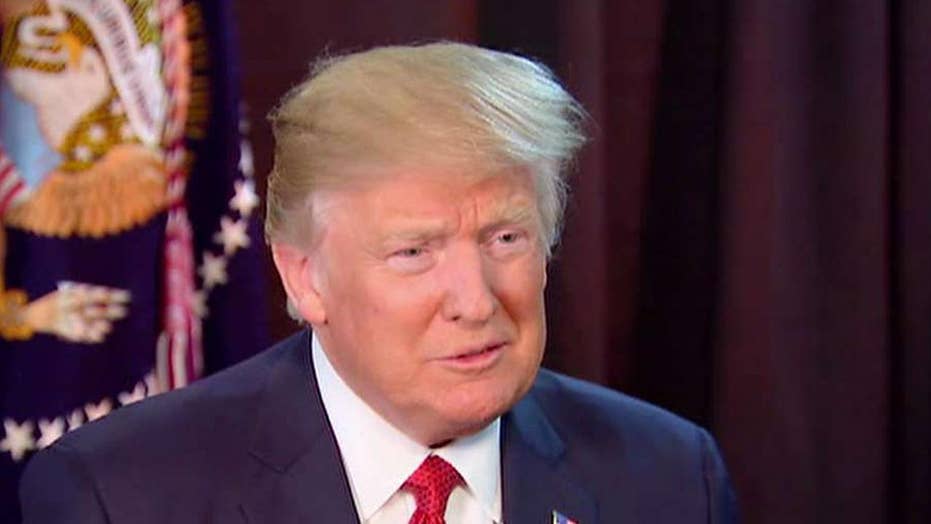 President Donald Trump expressed confidence in his plan to repeal ObamaCare and blasted his adversaries in the media and elsewhere for leaking a portion of his 2005 federal tax return during an interview on "Watters' World" that aired Saturday evening.

"Yes, we’re going to get something done and it’s going to be terrific and so much better than ObamaCare," said Trump, adding that health care is a "complex" subject. "If you allow [ObamaCare] to exist for another year, it’s going to implode."

When he was asked about a portion of his 2005 federal tax return being revealed on Rachel Maddow's MSNBC show, Trump hit back.

"They’re bad people, there’s something wrong with them.They leaked them, it’s illegal. I always heard that a tax return was a sacred kind of thing, you don’t leak them," Trump said. "It’s terrible what’s going on in Washington.… A tax return’s a very important thing and you’re not supposed to be leaking them. They just don’t respect the law and we have to change that."

"We’re gonna get a big reduction. We are the highest taxed nation," said Trump. "We’re going from seven to three or four tax brackets and that would be such a pleasure."

The president had kind words for Kentucky Sen. Rand Paul, who could be a thorn in Trump's side when the GOP health care bill comes up for a vote in the Senate.

"I like him, he’s become a friend of mine. He’s a good guy and he means well. I think ultimately we will come together," said Trump.

When asked who he would fire if he had to choose between CNN's Jeff Zucker, Alec Baldwin and Sen. Chuck Schumer, Trump would not choose.

"Chuck I'm very disappointed in, because he's a guy who should make deals for the people. Not as a Democrat or Republican," said Trump.

IN TRUMP'S $1.065 TRILLION BUDGET, THE DETAILS ARE IN THE WORDS RATHER THAN THE NUMBERS

Trump stated that he got Jeff Zucker his job at CNN and described the cable news network as "fake news."

"I think the Alec Baldwin situation is not good," Trump said. "The portrayal of me is ridiculous."

Trump was asked about criticism of him and his family in the media. He responded by highlighting positive changes that have taken place since his inauguration:

"We’ve done a great job in terms of manufacturing. Look at the border, down now 61 percent since the inauguration, stock market’s up almost 16 percent since the inauguration, over $3 trillion of value has been created, many jobs have been created… so ultimately that’s the thing that talks and as you probably saw the polls that came out today -- I’m at my all time high for this"