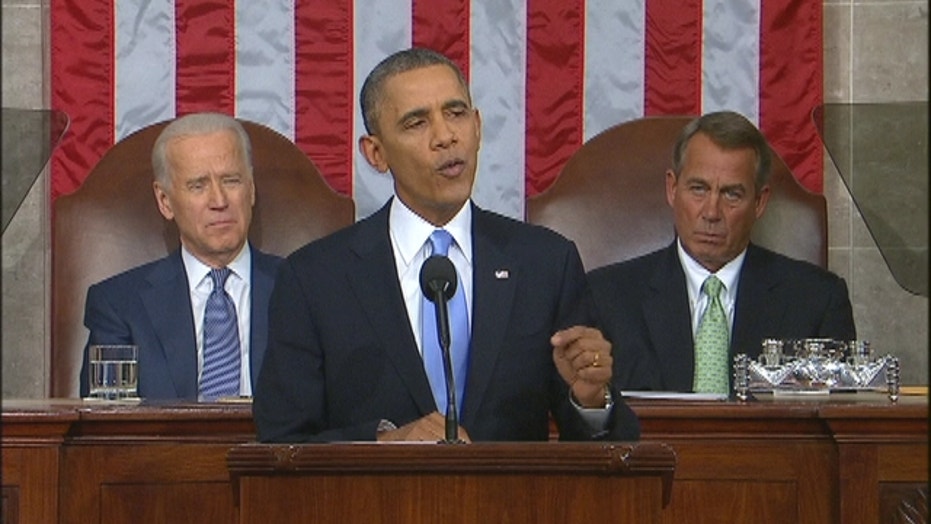 Obama's State Of The Union : 'Let's Get Immigration Reform Done This Year'

President Barack Obama talks about immigration reform during his State of the Union address.

President Barack Obama urged Congress to help restore opportunity for Americans but pledged to take action himself Tuesday in his fifth State of the Union address before Congress. Some highlights from Obama's economic and other proposals:

RETIREMENT SECURITY: Create a new savings account program to help people start saving for retirement. Obama is asking the Treasury to create a bond called MyRA that can be offered through employers as a "starter" retirement account. Call for Congress to create automatic IRAs for all workers who don't opt out. Obama has included this in previous budget requests but Congress hasn't acted on it.

IMMIGRATION: Renew call for Congress to pass comprehensive immigration overhaul this year, including a path to citizenship for about 11 million immigrants in the U.S. illegally. Bipartisan legislation has passed the Senate, but the House prefers a piecemeal approach. House Republicans are meeting this week and are expected to outline their principles for an immigration overhaul.

CLIMATE AND ENERGY: Set new fuel efficiency standards for trucks. Introduce first-of-its-kind emissions limits on power plants. Work with states and communities on climate change resiliency and cutting pollution. Cut red tape to help states build factories that use natural gas. Propose new incentives for trucks that use alternative fuels like natural gas. Urge Congress to end tax benefits for the oil industry and use revenues to invest in advanced vehicles that use cleaner fuels.

TAXES: Expand the earned-income tax credit, which helps boost the wages of low-income families through tax refunds. Some Republicans and conservative economists have called for similar expansion of the credit. Overhaul tax code to eliminate wasteful loopholes while lowering rates for businesses to incentivize hiring in the U.S.

HEALTHCARE: Encourage Americans without insurance to sign up through new exchanges by March 31 deadline. Urge Republicans to give up attempts to repeal Obama's health care law.

AFGHANISTAN: Wind down war in Afghanistan by removing most troops and completing mission by end of this year. Work to negotiate security agreement with Afghanistan so small force can remain to train Afghan forces and pursue al-Qaida.