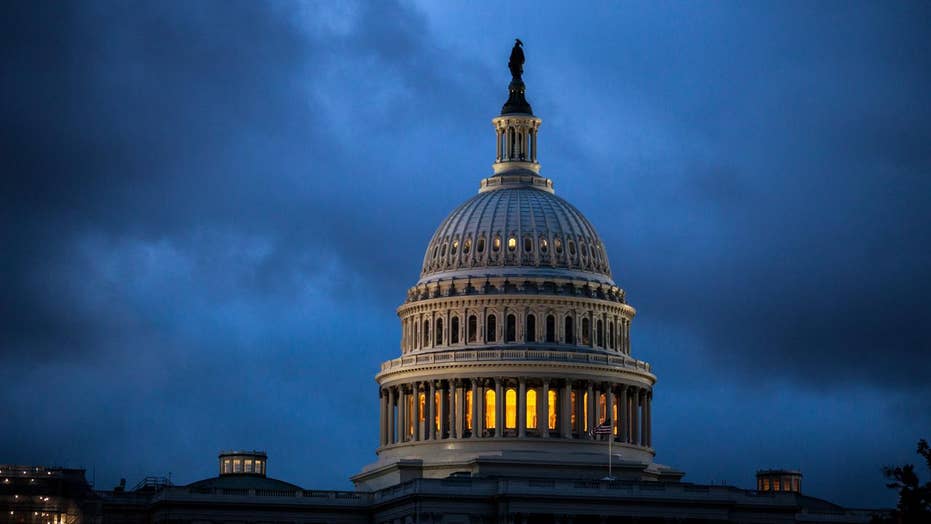 Senate ‘swamp creatures’ don’t have the guts to cut a nickel in spending: Rep. Gaetz

PRESENTING YOUR 2018 SENATE DEPTH CHART
To say that the 2018 Senate map is bad for Democrats is sort of like saying an asphalt parking lot is a hard place to grow corn.

It’s not that there aren’t some cracks out there for the Blue Team to push up a stalk or two, but as a result of the party’s tremendous successes in red-leaning states in 2006 and 2012, Democrats have a lot of seats to defend in tough territory. You can think of 2018 as the Senate Democrats’ Obama hangover.

The numbers game is brutal. Of the 34 seats up next year, Democrats must defend 23, compared to just nine for the GOP. Even with clear headwinds for Republicans, Democrats will be hard-pressed to reclaim the Senate majority they lost in 2016. A net loss of a seat or two is also very much a possibility.

What the Democrats do have going for them, however, is one of the ugliest phases of the long-running Republican civil war. With both sides of the intra-party split promising bitter, costly primary contests, not only might some incumbent Dems dodge defeat, but the GOP could actually lose ground.

The political world has been talking about symbolic wins and losses for months, but it’s time to get down to the real questions: Can Democrats gain three or more Senate seats, and thereby a majority or can Republicans give themselves a little breathing room on tough votes by adding some seats?

With all that in mind, we offer the first installment of the Halftime Report Senate Depth Chart, listed in order of seats most to least likely to change hands.

Claire McCaskill ought to feel very comfortable at the top of the list of most vulnerable incumbents in the Senate. After all, that’s where she spent most of 2012.

McCaskill’s unlikely reelection has become legendary among Republicans as a warning for the consequences of bad nominees like Todd Akin.

Whatever shape the race takes, it is guaranteed to be one of the costliest and nastiest in the country. McCaskill is a fighter and has a track record for figuring out how to survive in hostile territory.

Democrats have been gunning for Dean Heller since he was appointed to replace the scandal-plagued John Ensign. Once a reliably red state, Nevada has been turning bluer and bluer over the past decade. Heller has tried to stake out moderate positions while still not angering the considerable conservative base in the Silver State.

The Blue Team scored a recruiting victory with Rep. Jacky Rosen. She picked off a traditionally Republican district that covers the southern suburbs of Las Vegas last year.

She is no doubt hoping that the man she beat in 2016, Danny Tarkanian, will help her to another win. Tarkanian, the son of a legendary UNLV basketball coach, has become a perennial thorn in the state’s GOP side, and is already seeking support for a primary challenge to Heller.

You can be sure that at some part of every day, Vice President Mike Pence considers the fact that his state is represented by a Democrat in the United States Senate. This is not a happy consideration for the former Hoosier governor.

While some other Democrats on this list might be able to count on easy treatment from President Trump, who is looking for bipartisan support for his tax plan, but probably not Joe Donnelly.

Freshman Donnelly’s best hope to hold on is the same thing that got him elected in the first place: an unhappy GOP primary.

Donnelly, a moderate Democratic congressman was able to snatch the seat after longtime incumbent Richard Lugar was unseated in the Republican primary and little-known nominee Richard Mourdock came up short in the general.

The GOP primary is already getting ugly between two sitting congressmen Luke Messer and Todd Rokita.

The showdown between Messer and Rokita looks to be one of the worst brawls between the Bannon and McConnell factions of the GOP. Pence will no doubt be pressuring a swift conclusion to the race but if it gets out of hand, Donnelly could still hang on.

Clear-thinking Democrats took no solace from Jeff Flake’s announcement that he would not seek reelection. With him gone, the state GOP has the chance to avoid what was bound to be one of the worst primaries of the year.

Flake had double trouble: he was disliked by his party’s conservative base but also facing a general electorate moving away from the GOP.

Democrats also have a top recruit in Rep. Kyrsten Sinema, a veteran politician with good fundraising skills and an existing organization.

How competitive this race ends up being next fall will depend on the shape of the GOP primary. The potential showdown between Rep. Martha McSally and former State Senator Kelli Ward promises to be intense.

Democrats have consistently underestimated Florida Governor Rick Scott, but they won’t if he opts to take on vulnerable Democratic Senate incumbent Bill Nelson.

Scott, considered an unlikely candidate when he ran for his first term, not only swept to reelection, but continues to enjoy strong approval ratings.

Nelson, meanwhile, is a longtime political figure in the Sunshine State who has fallen off of the radar of many younger voters.

The competitiveness of this race depends entirely on the millionaire Scott’s willingness to jump in. Scott is tight with Trump, who no doubt will urge his friend to provide reinforcement to the Senate.

Joe Manchin may be Trump’s favorite Democrat of all, which is pretty convenient since he happens to represent a state that loves Trump like no other.

Republicans originally put Manchin high on the list of 2018 targets, figuring that the former governor’s personal popularity couldn’t survive in a state that was the epitome of Trump Country.

To top-tier GOP recruits, Attorney General Patrick Morrisey and Rep. Evan Jenkins, are getting ready to duke it out in a primary that will be fought explicitly along Bannon v. McConnell lines.

A complicating factor in the race for Republicans, though, is that Gov. Jim Justice switched from blue to red earlier this year. He may be the new head of the West Virginia Republican Party, but he’s still a friend of Manchin’s.

This is a seat where the popular incumbent combined with divided Republicans could easily cost the GOP what was once thought to be an easy pick up.

One reason for that is the political resourcefulness of Heidi Heitkamp.

State and national Democrats have given Heitkamp uncommon latitude as she faces what was always going to be a tough bid for a second term. So much so that she has been able to get quite cozy with President Trump.

Republicans know that they still have a great shot for a win here, especially with the right recruit. Sen. John Hoeven is the state’s former longtime governor and big dog of North Dakota politics. If he can convince Rep. Kevin Cramer, already elected statewide, to challenge Heitkamp, she might not have enough moves in her playbook to hold on for another six years.

TAXI SQUAD
There are plenty of other races that can interesting fast depending on candidate recruitment, the course of events in Congress and other unknown unknowns. Here are a few to keep your eye on: