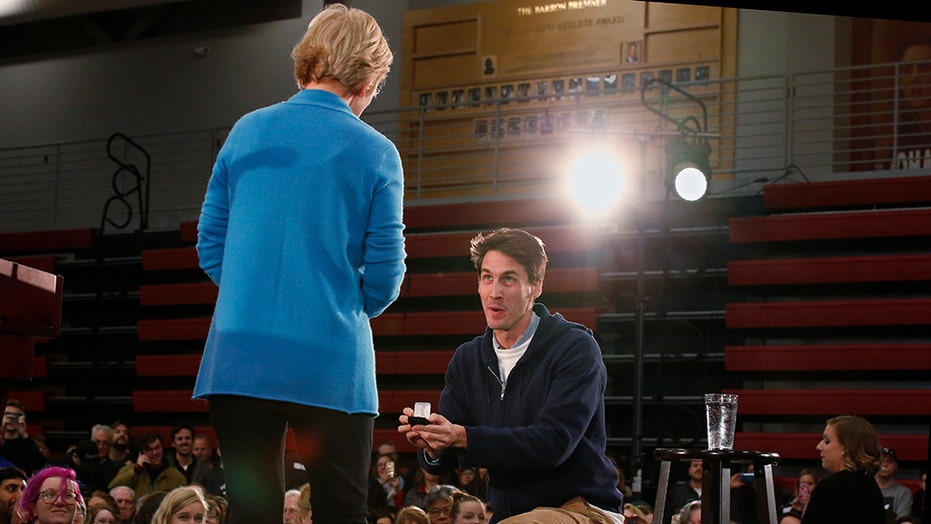 Two pranksters appear to be trolling the candidates across Iowa in the lead-up to the state's caucuses Monday night -- with antics ranging from mock proposals to presidential contenders to fake playbills handed out at rallies.

"The Good Liars," a New York City-based comedy duo of Jason Selvig and Davram Stieflier, have created awkward moments for 2020 Democrats looking to make a good last impression on Iowa voters before the first-in-the-nation caucuses. Most recently, they asked former Vice President Joe Biden for some marriage advice at a Saturday rally.

AS JOE BIDEN COMPETES FOR A WIN IN IOWA, ONE GOP SENATOR IS ALREADY TALKING ABOUT IMPEACHING HIM

A person appearing to be Selvig stood up and asked Biden what he should do after his wife left him, prompting Biden to say he would have that conversation after the event. When the prankster insisted on not putting off the conversation, Biden zinged back, "I'm beginning to see why your wife left you."

"The Good Liars," also showed up at an Elizabeth Warren rally, where one of the rascals, appearing to be Selvig, got on stage and bent to a knee before asking Warren, "Will you be my candidate for president?"

Warren laughed before responding, "Yes, I will be your candidate for president," then hugging him and shaking his hand.

The Massachusetts senator then allowed the prankster to say a few words, which she likely regretted.

"My friend Dale, where's my friend Dale, there he is. He's an incel and he just wanted to say his first words to a woman in a long time," Selvig said.

Selvig and Stieflier were also spotted at an Andrew Yang rally, calling him a robot. But the pair doesn't just take shots at Democrats. They showed up at President Trump's Jan. 30 rally in Des Moines to hand out fake playbills which featured a mocking outline of how the rally would go.

In "Act 1," the playbill predicted Trump would say "witchhunt ten times in 2 minutes" and accuse the "media of not reporting size of rally."

The second act supposedly would feature a segment where "Trump publicly admits to a crime" and a "'Build the Wall,' Reprise."

Some of "The Good Liars'" previous work includes New York City subway ads from last year advertising the "Law Offices of Crazy Rudy," a spoof on Trump lawyer Rudy Giuliani, and "Occupy Occupy Wall Street," a prank in which the pair posed as investment bankers protesting against the anti-business protest movement.