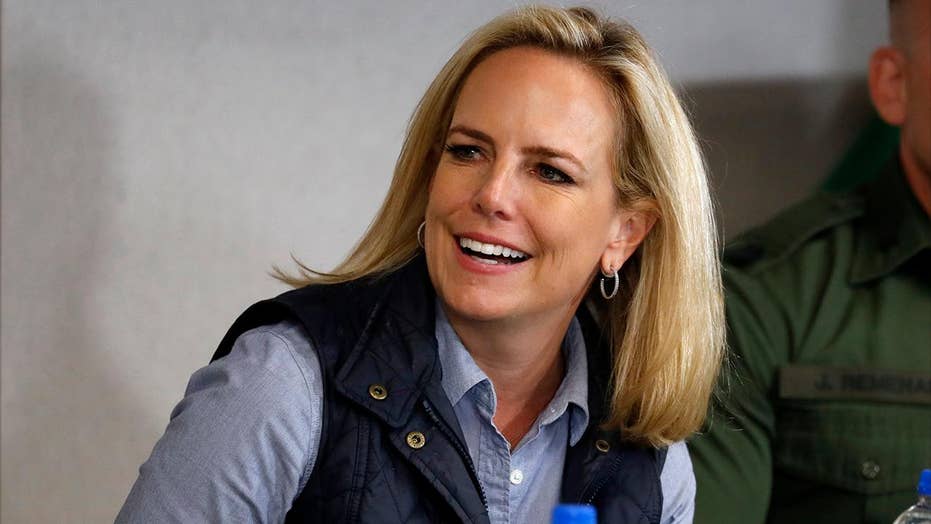 Kirstjen Nielsen to resign from the Department of Homeland Security

Kirstjen Nielsen, the secretary of Homeland Security, is leaving her role in the Trump administration, the president announced Sunday.

Nielsen spent 16 months on the job, after taking over for former White House Chief of Staff John Kelly.

"@SecNielsen’s legacy of tearing innocent families apart will follow her for the rest of her life—and she should be ashamed of the role she played," the senator said. "She was completely unqualified to lead @DHS—and that's why I voted against confirming her."

"When even the most radical voices in the administration aren’t radical enough for President Trump, you know he’s completely lost touch with the American people," Senate Minority Leader Chuck Schumer, D-N.Y. tweeted of Nielsen's departure.

Sen. Mazie Hirono, D-Hawaii, tweeted that she "repeatedly called for Kirstjen Nielsen's resignation for her lies in service of @realDonaldTrump’s abhorrent immigration policies, and I welcome her decision today."

"History will not judge her or the president kindly," Hirono added. "Sadly, we can expect @realDonaldTrump to nominate a permanent replacement who will also do his bidding as DHS Secretary. We must continue to speak out and remain organized and vigilant.

Hirono last year called on Nielsen, along with White House Press Secretary Sarah Sanders, to resign, saying the two "have sold their souls" working for Trump.

House Homeland Security Committee Chairman Bennie Thompson, D-Miss., said in a statement that Nielsen's time at the department "was a disaster from the start."

"It is clearer now than ever that the Trump Administration's border security and immigration policies — that she enacted and helped craft — have been an abysmal failure and have helped create the humanitarian crisis at the border," Thompson's statement read.

He continued, "It is truly unfortunate that Nielsen refused to take responsibility for her actions and was simply unable to lead and stand up to the President for his misguided, wall obsessed anti-immigrant agenda.”

The congressman also criticized the timing of Nielsen's departure, noting that Homeland Security currently has neither a Senate-confirmed secretary nor a deputy secretary.

Julian Castro — who served in the Obama administration as secretary of Housing and Urban Development and is currently running for president in the 2020 election — tweeted Nielsen "has been a willing partner in the most cruel and short-sighted immigration agenda in decades."

Another presidential candidate, former Rep. John Delaney, D-Md., said: "The fact that Secretary Nielsen can no longer be an effective messenger for the White House shows just how out of touch and cruel the President’s immigration policies are. Congress should do its due diligence and properly vet the next DHS Secretary."

"I thank @SecNielsen for her leadership and dedicated public service at @DHSgov," Sen. Shelley Moore Capito, R-W-Va., tweeted following Nielsen's resignation. "She is a strong and thoughtful leader and was an excellent partner in supporting the department’s critical work."

The senator, who chairs the Homeland Security Appropriations Subcommittee, added that she looks forward to working with Customs and Border Protection Commissioner Kevin McAleenan "in continuing to ensure DHS has the resources it needs to provide for our national security and keep Americans safe."

Trump earlier Sunday announced that McAleenan would be taking over for Nielsen.

Sen. Ron Johnson, R-Wis., said in a statement that it's clear "we have a crisis at the southwest border.

"We need steady, informed and effective leadership in the administration and in Congress to have any hope of fixing our out of control border security and immigration problems," the chair of the Homeland Security and Governmental Affairs Committee continued.