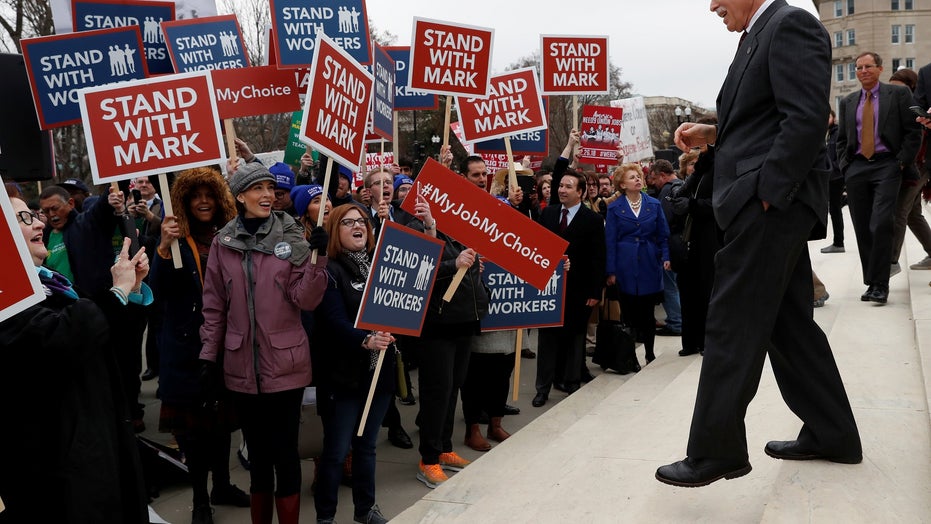 Illinois Governor Rauner on why the Supreme Court's ruling is a big victory.

The plaintiff whose 2018 case led to a Supreme Court ruling that mandatory public union agency fees for nonmembers were unconstitutional is now asking the high court to force the union that represented him to return a portion of the money it collected before that decision.

In this most recent case, Janus v. AFSCME III, plaintiff Mark Janus is asking for the union to pay back fees it took from his paycheck before the landmark ruling in his 2018 case. He claims that the Supreme Court's ruling should be retroactive, echoing other claims that have been made in federal court, including a sweeping class action that was filed in California last year.

"The Supreme Court agreed that the union taking money from nonmembers was wrong but the union still has the money it illegally garnished from my paycheck," Janus said in a press release through the National Right to Work Legal Defense Foundation, one of the organizations handling his case.

“Workers across the country are rightfully asking for their money back," Hughes continued. "It is time for the U.S. Supreme Court to weigh in on this issue and finally hold unions accountable for their years of unconstitutional behavior."

The district court and the Seventh Circuit each ruled that AFSCME, while acting legally under Illinois state law to collect agency fees, was acting in good faith and does not need to pay Janus back any money that was collected before his 2018 Supreme Court victory.

"Until [the Janus decision] said otherwise, AFSCME had a legal right to receive and spend fair-share fees collected from nonmembers as long as it complied with state law ... It did not demonstrate bad faith when it followed these rules," the Seventh Circuit said in its opinion.

Janus disputes this argument, saying that whether or not the union thought it was complying with the law does not matter.

"Under Janus, a union deprives public employees of their First Amendment Rights by taking their money without affirmative consent," Janus' brief asking the Supreme Court to hear his case says. "A union's intent when doing so is immaterial."

The 2018 Janus ruling barred mandatory agency fees on First Amendment grounds, arguing that the money given to the union went to causes and speech that Janus -- and presumably at least some other public employees -- disagreed with. Unions are often significant boosters for Democrats and liberal causes.

At the time, liberals and unions were concerned that banning mandatory agency fees would lead to significant financial hardships for public sector unions and eventually a "death spiral."

"Because unions will retain their role as exclusive bargaining representatives, they will still have to gather information on public safety employees' needs, engage in collective bargaining, and enforce collective bargaining agreements, even when particular violations only involve nonmembers," a brief submitted for the 2018 Janus case by a group of public safety employee unions said. "Consequently, many unions risk a 'death spiral': unions will have to raise dues to make up the budget shortfall attributable to the elimination of fair-share fees, causing membership numbers to fall, which will necessitate raising dues further, and so on."

To be sure, unions have done well since the 2018 Supreme Court ruling. AFSCME has even boasted about its financial health.

But a ruling against the unions again could open the floodgates to more lawsuits from workers who also want a refund of their agency fees that were collected before 2018.

While Janus is only seeking about $3,000 in his claim, the groups backing Janus' suit said in a press release that they are working on over 30 cases similar to this one, totaling a whopping $120 million in requested refunds.

These are not the only type of post-Janus challenges to union power before the Supreme Court, however. The high court is expected to decide this term whether it will hear the case of a University of Maine professor who is arguing that not only should public-sector unions be barred from taking mandatory agency fees, but they should not be allowed exclusive representation of all employees in a workplace.

"The union still has the ability to be my exclusive representative,” Jonathan Reisman, the plaintiff in the case, said in a video produced by the organization representing him. “And I’m still associated with the positions that they take. That really is the problem."

Seventh Circuit Judge Daniel Manion, in a concurring opinion on the latest Janus challenge, agreed that the "good faith" defense protected AFSCME from further financial liability in Janus' suit. But he said the union should consider itself fortunate to have unconstitutionally collected agency fees for 41 years under law the Supreme Court later said was wrong.

That is a sentiment some conservative justices may latch onto in a potential ruling against AFSCME if the Supreme Court agrees to hear the case.

"Even though the Supreme Court reached the wrong result [in a case decades before its landmark 2018 ruling], the unions justify their acceptance of many millions of dollars because they accepted the money in 'good faith,'" Manion wrote. "Probably a better way of looking at it would be to say rather than good faith, they had very 'good luck' in receiving this windfall for so many years. Since the court is not holding that the unions must repay a portion of the windfall, they can remind themselves of their good luck for the years ahead."