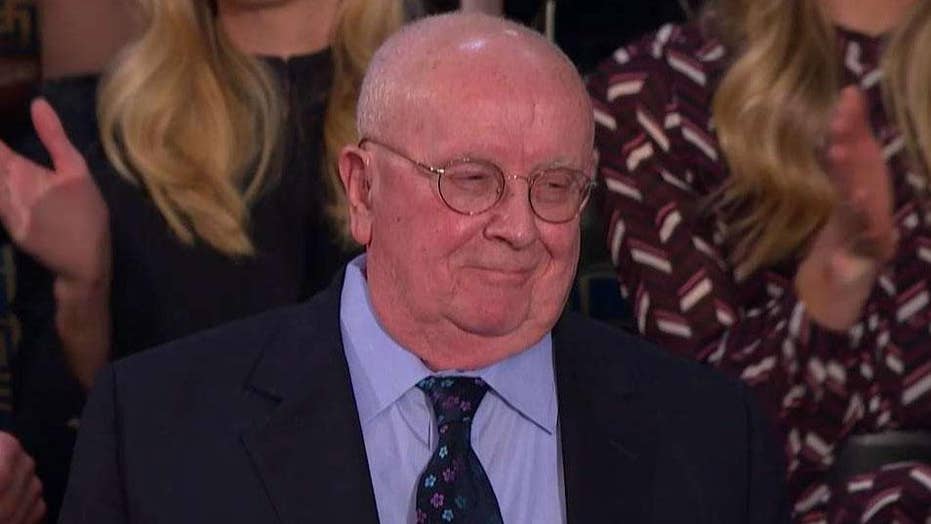 A somber Judah Samet, a Holocaust survivor and member of the Tree of Life Synagogue in Pittsburgh, stood up as President Trump recalled the tragedy that took 11 lives in October during his State of the Union address Tuesday.

Samet arrived at the synagogue as the massacre began, Trump explained as Samet stood in place — his mouth trembling — in the gallery.

WHY ARE WOMEN WEARING WHITE TO STATE OF THE UNION? DEMOCRATIC LAWMAKERS AIM TO SEND 'LOUD AND CLEAR' MESSAGE

The room roared with applause as Samet waved and let out a grin and blew a kiss to the crowd.

Quietly, lawmakers and their guests began serenading the 81-year-old with "Happy Birthday." Trump looked up at Samet and smiled.

Slowly, the song started getting louder and Trump jokingly started "directing" the singers.

Once again, Samet rose from his seat and bowed his head to thank the audience.

"They wouldn't do that for me, Judah," Trump joked.

The president then continued to share Samet's incredible story of survival, revealing Samet vividly recalls the day his family was put on a train and told they were going to another concentration camp after spending 10 months imprisoned.

"Judah immigrated to Israel after [World War II] and was present for the declaration of the Israeli State in 1948. He served as a paratrooper and radio man in the Israeli Defense Forces and moved to the United States in the 1960s," the White House described in a profile of Samet on its website.