Billionaire Silicon Valley investor Peter Thiel says there is one Democratic presidential candidate who makes him most concerned ahead of the 2020 elections.

Sen. Elizabeth Warren, D-Mass., is the only Democratic candidate campaigning on the economy, while others are mired in discussions about identity politics, Thiel said Monday on "Tucker Carlson Tonight."

"I'm most scared by Elizabeth Warren," he said.

"I think she’s the one who’s actually talking about the economy, which is the only thing that I think matters by far the most." 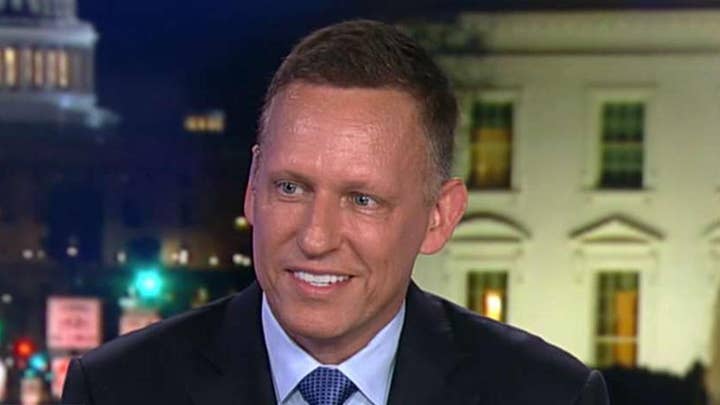 "I think almost all the others are equally unimpressive in the sense that it’s all identity politics of one flavor or another," he said.

"I wouldn’t want to rank how unimpressive they are, since that would be forcing me to rank the different identities and which one’s more privileged and more special, and that would be a dangerous thing to get into."

Earlier in the interview, Thiel discussed how he called Sunday for the FBI and CIA to investigate whether Chinese intelligence had infiltrated Google.

Thiel made the comments during a speech at the National Conservatism Conference in Washington. He said the FBI and CIA needed to ask Google three questions to determine if the tech giant had been compromised by Chinese intelligence.

Speaking to Carlson, Thiel said artificial intelligence is something, "people talk about nonstop in Silicon Valley."

"But they almost never talk about its dual use," he said.

"If it’s real, if this is a real thing, it obviously can also be used by the military, it’ll be weaponized in all sorts of ways, and it’s an important national security question as to who has it.