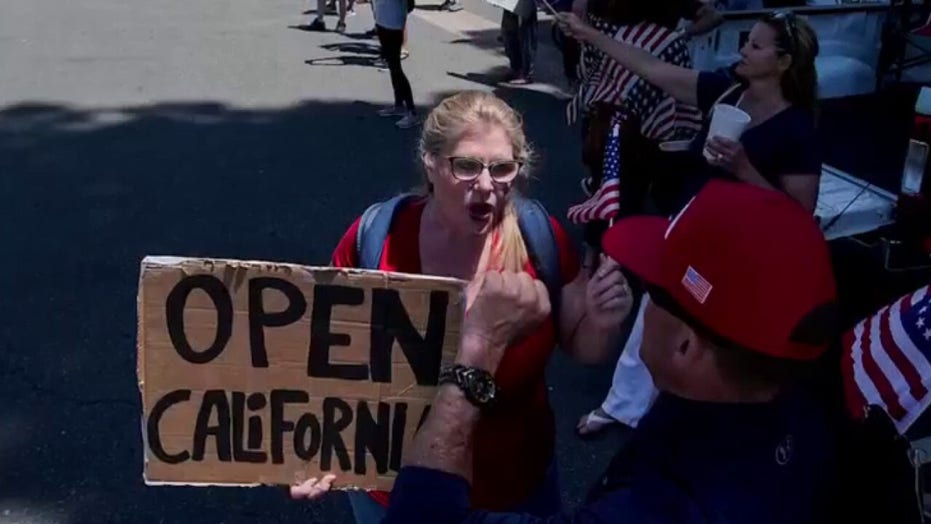 Businesses in Pennsylvania and California sue for right to reopen

Pennsylvania Gov. Tom Wolf lashed out Monday at counties in the Keystone State that are defying his shutdown order and moving ahead with reopening businesses – threatening to withhold coronavirus aid and saying they are "choosing to desert in the face of the enemy."

Breaking from his normal, mild-mannered tone, the Democratic governor expressed his anger on Monday with a number of local elected officials who have said they will buck Wolf’s staggered reopening plan. Wolf said the defiant county officials were “operating illegally” and “jeopardizing the lives of citizens of those counties.”

Wolf last week lifted his stay-at-home order – allowing golf courses, marinas, private campgrounds and some retailers to remain open – and also eased other restrictions in the least-affected parts of the state. The governor, however, cautioned that the shutdown can be loosened in a county or region only once virus trends hit key benchmarks laid out in his reopening plan.

However, there is growing discontent from a number of county commissioners in the more rural parts of Pennsylvania to Wolf’s phased reopening, who argue that they have not been as hard hit as other areas and should be allowed to lift restrictions.

At least 10 counties in the state’s Susquehanna Valley have either announced a date to reopen or demanded Wolf lift the orders, while district attorneys and sheriffs from several counties have said they will not prosecute or enforce the restrictions on any businesses that choose to reopen.

A group of state lawmakers in Pennsylvania’s Franklin County sent Wolf a letter over the weekend informing him of their plans to go against his shutdown orders. They argue in their letter that the county has met the requirements of the original stay-at-home order by flattening the curve in the county, that local health care facilities now have the capacity to treat patients, and that they have enough personal protective equipment and COVID-19 tests to handle the pandemic.

“We, the undersigned, as duly elected state and local officials take the safety of our constituents very seriously,” the lawmakers said. “Subsequent movement to returning to normal operations will be at the discretion of the undersigned when certain thresholds are achieved.”

Officials in Lancaster County also penned a letter to Wolf, saying he was inconsistent in what was permitted to reopen and questioning his “methods.”

"We prefer to act with your cooperation, but we intend to move forward with a plan to restore Lancaster County,” the letter states. “Governor, we don't question your motives, however given all that has unfolded over the past several weeks, we must question your methods. We believe we share the same goals: public health, safety and an economy that can begin to recover."

Wolf’s threat to counties going rogue comes as he faces pressure to speed up the reopening not just from within Pennsylvania, but also from the White House.

President Trump on Monday singled out Pennsylvania in a tweet, where he accused Wolf – and other Democratic governors – of keeping states closed for "political purposes" and of “moving slowly” in loosening restrictions and reopening businesses shuttered by the coronavirus pandemic.

This week, most of western and northern Pennsylvania will emerge from the restrictive orders implemented by Gov. Wolf that limit movement and businesses. But stay-at-home orders have been extended until June 4 for Philadelphia – the state’s largest city – and the surrounding suburbs.

“I don’t know how you stay safe and move quickly. We’re trying to move deliberately,” Wolf said at a news conference Monday, as he responded to the president’s tweet.