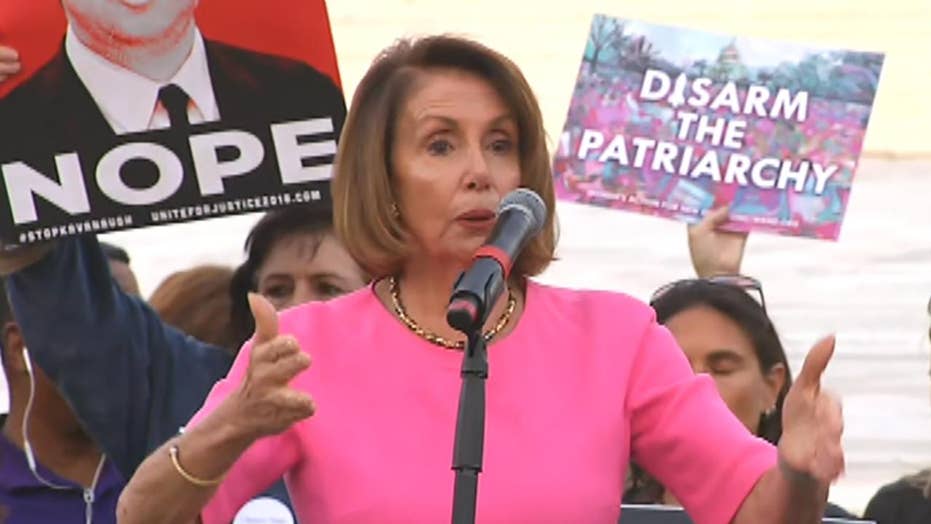 Speaking in front of throngs of spirited far-left protesters at a rally at the Supreme Court on Wednesday evening, House Minority Leader Nancy Pelosi accused Republicans supporting court nominee Brett Kavanaugh of being "cowardly, patriarchal people" who want to "undo the 'Me Too' movement."

The 78-year-old California Democrat told demonstrators that women should be believed by "default," and charged that the Senate GOP "hid" from interviewing Christine Blasey Ford, the California professor who has made an uncorroborated claim that Kavanaugh sexually assaulted her more than three decades ago.

Judiciary Committee Republicans made numerous outreach efforts to Ford, who claimed that her fear of flying prevented her from promptly traveling to Washington, D.C., and testified she had not understood investigators' repeated, public offers to fly out to meet her in California. (In a letter obtained by Fox News, Ford's ex-boyfriend contradicted Ford's testimony and said she seemingly had no fear of flying when they dated for several years.)

Pelosi then appeared to compare Kavanaugh, who stands accused of uncorroborated sexual misconduct dating back more than three decades, to some of the country's biggest geopolitical adversaries.

Referencing President Trump: Pelosi said, "I guess there's a similarity that people have with the people that they respect. [Trump] is crazy about [Vladimir] Putin, in love with Kim Jong Un, and thinks Kavanaugh is a great, outstanding person. Well, you know what? He doesn't even know what he is talking about."

Pelosi had vowed, even before Kavanaugh's nomination to the high court, that she would "avenge Obama" in a fiery fundraising email, referencing his failed nomination of D.C. Circuit Court of Appeals Judge Merrick Garland in 2016. In recent days, she has floated the idea of impeaching Kavanaugh if he is ultimately seated on the Supreme Court. That extraordinary measure would require a two-thirds vote of the Senate.

Fox News has confirmed the FBI will provide the results of its supplemental background check into Kavanaugh to senators and certain aides on Thursday morning, but top Democrats have preemptively criticized the agency's review, saying it was too hasty and improperly influenced by the White House. Trump has said the FBI could interview "whoever" it wants as part of the probe. 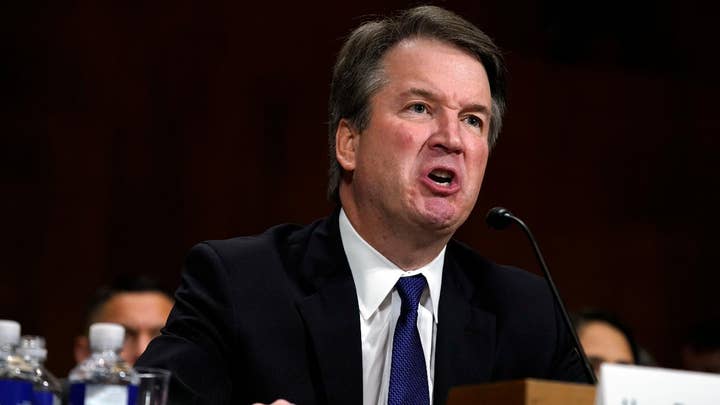 Kavanaugh testifed he would endorse whatever measures the Judiciary Committee decided on, although he voiced concern that further delays in the confirmation process would expose his family to continued threats and spurious allegations.

SWETNICK EX-BOYFRIEND SAYS SHE THREATENED TO KILL HIS UNBORN CHILD, WAS 'EXAGGERATING EVERYTHING'

"The default of truth is to the woman."

Pelosi added: "The only person who doesn't  have to be vetted is the president of the United States, and it's pretty clear he could not withstand a vetting."

In July, NARAL objected to Kavanaugh's first name and previewed the current line of attack that the nominee drank too much in his college and high school years.

“We'll be DAMNED if we're going to let five MEN — including some frat boy named Brett — strip us of our hard-won bodily autonomy and reproductive rights,” the organization said in a tweet at the time.