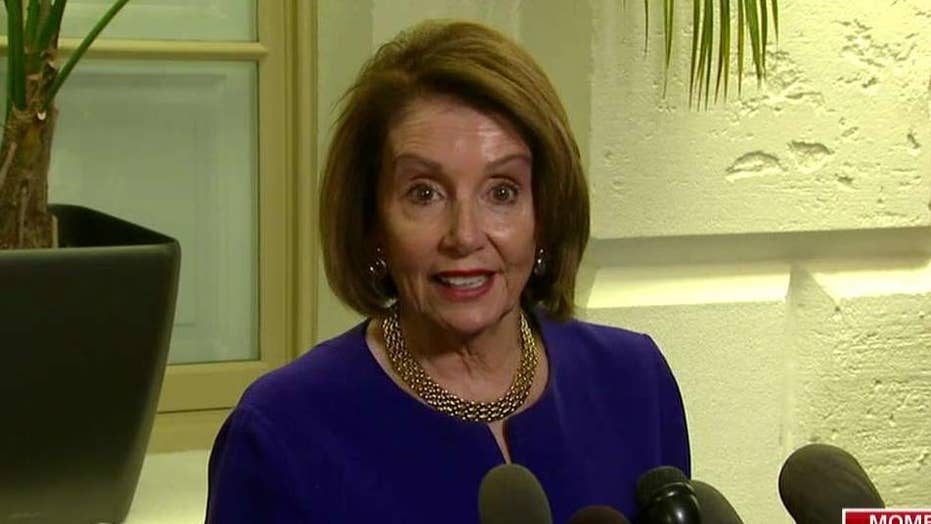 Pelosi says Democrats believe Trump is 'engaged in a cover-up'

'No one is above the law, including the president of the United States,' House Speaker Nancy Pelosi says after holding a meeting with Democrat committee chairs.

House Speaker Nancy Pelosi and her deputies scrambled Wednesday to tamp down calls from the rank-and-file for Congress to launch impeachment proceedings against President Trump, holding a closed-door meeting with Democrats to discuss their battles with the administration that threaten to escalate into a politically risky drive to remove him from office.

Pelosi, D-Calif., has maintained her position that Democrats should not begin impeachment proceedings against Trump, but has faced pressure from members inside her caucus to reverse course -- especially after former White House Counsel Don McGahn was told to defy a subpoena earlier this week.

“We had a very productive meeting,” Pelosi told reporters after the session. “It was a respectful sharing of ideas.”

The meeting came as top Democrats have steadily ramped up pressure on the Trump administration. On Tuesday, the Justice Department reached an agreement with House Intelligence Committee Chairman Adam Schiff, D-Calif., to turn over some documents related to Special Counsel Robert Mueller's investigation, in a rare de-escalation. But it only came after Democrats issued a subpoena, one of many that congressional Democrats have approved for Trump-related investigations. They've also pursued a contempt citation against Attorney General Bill Barr and could do the same for McGahn.

"These are all current examples of progress that was made to get the truth and facts for the American people," Pelosi said, in an apparent attempt to keep Democrats on track with their existing investigations -- and not go the impeachment route.

Pelosi has faced accusations from fellow Democrats, however, of holding off on impeachment for political reasons. Sources familiar with the Wednesday morning meeting told Fox News that Pelosi told lawmakers their decision would not be based on politics.

House Majority Leader Steny Hoyer, D-Md., however, said Tuesday that there would be some “political calculus” with regard to impeachment.

The sources also told Fox News that Pelosi told members of the caucus to listen to the committee chairs -- and House Oversight Committee Chairman Elijah Cummings, D-Md., reminded members to keep vulnerable freshman lawmakers in mind as they decide how to proceed with investigations or impeachment.

Congressional Democrats have been torn on the issue of impeachment. Pelosi and others in House Democratic leadership have not been publicly in favor of impeachment, but the pressure from the ranks is growing.

A senior House Democrat told Fox News on Monday that Pelosi “isn’t going to be able to hold off on impeachment much longer,” and that the speaker may have to change her position “within the next two weeks.”

Freshman Rep. Alexandria Ocasio-Cortez, D-N.Y., suggested Tuesday that politics are the main element preventing members from pressing ahead at this stage.

Meanwhile, Rep. Steve Cohen, D-Tenn., reportedly confronted Pelosi during an earlier Democratic Steering and Policy Committee meeting as he demanded the president's impeachment. According to Politico, Cohen said that while former President Bill Clinton was impeached “over sex,” Trump was “raping the country.”

Cohen reportedly suggested Pelosi is worried about politics in her reluctance to proceed, but Pelosi countered, “This isn’t about politics at all. It’s about patriotism.”