Pelosi calls the move for impeachment 'divisive to the country'; reaction and analysis on 'The Five.'

House Speaker Nancy Pelosi, D-Calif., revealed she's opposed to the impeachment of President Donald Trump in the absence of evidence that is "compelling and overwhelming and bipartisan."

"I’m not for impeachment," Pelosi told The Washington Post in an interview published Monday. "Impeachment is so divisive to the country that unless there’s something so compelling and overwhelming and bipartisan, I don’t think we should go down that path, because it divides the country. And he’s just not worth it."

The speaker's remarks ran counter to sentiments expressed by some freshman members of her caucus, most notably Rep. Rashida Tlaib of Michigan, who vowed to Democratic activists that she would help "impeach the motherf---er" hours after she was sworn in this past January. 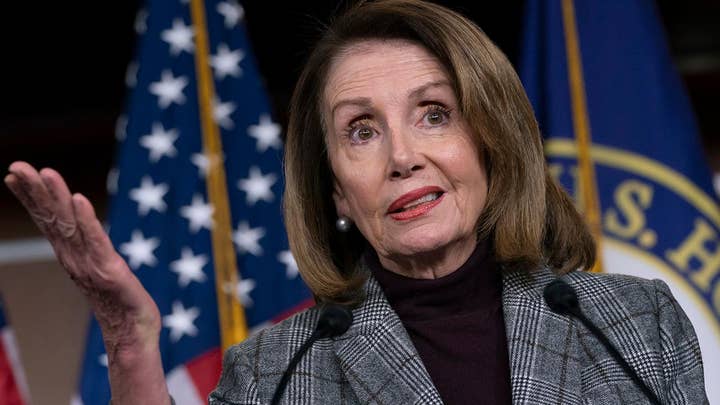 Despite her opposition to impeachment, Pelosi said Trump was "unfit" to be president "ethically," "[i]ntellectually," and "curiosity-wise." However, she added that her own relationship with Trump has been "respectful of the office that he holds."

"[I] just tell him what I think," Pelosi said, adding that she was "[h]opeful that at some point we can find common ground that he’ll stick to. So, yeah, respectful, honest and hopeful."

However, Pelosi also accused the president of "disregarding the Constitution of the United States [and] disregarding our commitments to the world in terms of our commitment to NATO, to Paris climate, to our values."

Billionaire activist Tom Steyer, who is bankrolling a campaign pushing for Trump's impeachment, shot back at Pelosi on Monday: "Speaker Pelosi thinks `he's just not worth it?' Well, is defending our legal system `worth it?' Is holding the president accountable for his crimes and cover-ups `worth it?' Is doing what's right `worth it?' Or shall America just stop fighting for our principles and do what's politically convenient."

Neil Sroka of the liberal advocacy group Democracy for America said Pelosi's comments were "a little like an oncologist taking chemotherapy off the table before she's even got your test results back."

Other lawmakers who have called for impeachment looked at Pelosi's comments more practically. Rep. Brad Sherman, D-Calif., who filed articles of impeachment against Trump on the first day of the new Congress in January, acknowledged that there is not yet public support for impeachment, but noted that Pelosi "didn't say `I am against it if the public is clamoring for it."'

Sherman said that the multiple Democratic investigations of Trump might be a substitute for impeachment, "it's also possible it will be a prelude."

Sanders added of impeachment, "I don't think it should have ever been on the table."