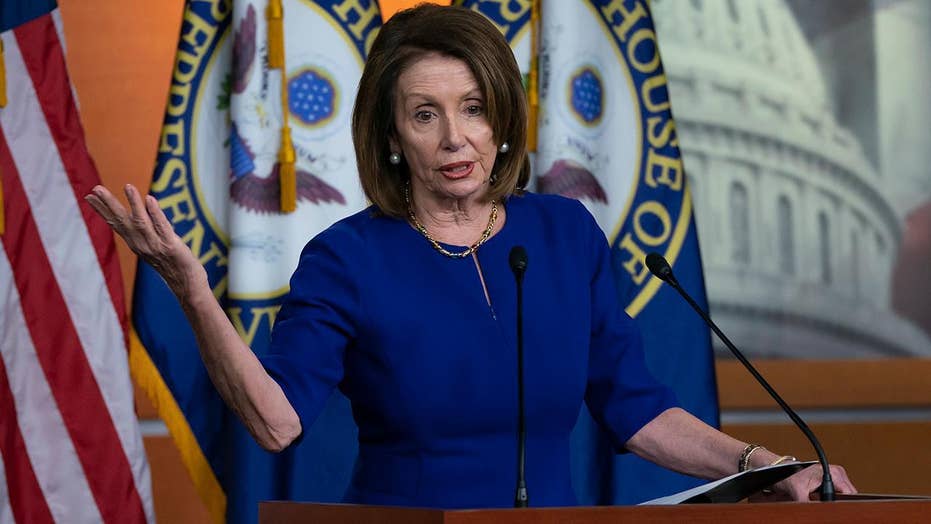 r the House anti-hate resolution leads to party infighting, Nancy Pelosi facing new questions about how much control she has over her the Democratic Party; reaction and analysis from 'The Five.'

House Speaker Nancy Pelosi – and the old guard Democrats at large – are in a very difficult position.

The radical young voters that Democrats have been courting for years have finally elected like-minded radical young representatives – and Pelosi, D-Calif., and her leadership team have no control over them.

A big reason why, as I mentioned on “Hannity” this week, is that there is a wide generation gap between Democratic House leaders and freshmen Democrats such as Alexandria Ocasio-Cortez of New York, Ilhan Omar of Minnesota and others.

The median year of birth for the 59 Democrats who assumed office this year is 1973. Sixteen of these members were born on or after 1980.

Nancy Pelosi was born in 1940. The average age of Democratic leaders is 71.

To the new Democrats, the leaders are like the grandparents. And I don’t mean this in a positive way that could foster an opportunity for maternal or paternal mentorships.

The new Democrats believe the Pelosi’s team represents an outdated, backward way of thinking about government. This is understandable. How many 30-somethings do you know who share the same point of view as their 80-year-old grandparents?

The result is that these new Democrats are throwing a party – and the grandparents aren’t invited.

Pelosi simply can’t control the young, radical, progressive wing of House Democrats – a group that is ardently socialist, anti-Israel, and contemptuous of America and its history.

Pelosi and members of Democratic leadership are simply trapped in a cycle of responding to headlines. This is how you end up with the so-called Green New Deal, which is a work of complete legislative fantasy that would utterly bankrupt the country.

This is also how the House got to a second forced public condemnation of the new Democrats’ flagrant anti-Semitism. Pelosi simply can’t control the young, radical, progressive wing of House Democrats – a group that is ardently socialist, anti-Israel, and contemptuous of America and its history.

This gap will continue to create massive cross-pressure in the Democratic Party.

For the Democrats who represent moderate districts – perhaps districts that voted for President Trump – the radical left-wing of the party is terrifying.

Meanwhile, those who represent radical districts are going to continue having their party and continue to ignore the old guard.

This is not at aberration. The new class of Democrats despise Pelosi and the grandparents. The old guard has failed to create the radically progressive, socialist America that the new guard wants.

This phenomenon has some similarities with conservative voters who widely rejected establishment Republicans and the liberal voters who rejected Hillary Clinton in the 2016 primary.

Already, because of Pelosi’s inability to control her caucus, the Democrats can’t do anything positive. It’s making them desperate. The most they can do is focus their efforts on their shared vendetta against President Trump and everyone in his orbit.

The 81 subpoenas that House Judiciary Committee Chairman Jerrold Nadler, D-N.Y., levied against Trump allies – many of whom are private citizens who never intended or wanted to become public figures – illustrate this desperation.

Democrats are slowly realizing – with dawning horror – that Special Counsel Robert Mueller is not likely to provide them anything close to a smoking gun in the crusade against President Trump. So they are resorting to punishing the Trump political campaign, family members, and longtime private sector employees in a vindictive public display.

The Democrats are seeking to hurt anyone and everyone who has helped President Trump in any way. At best, it’s a gross political circus. At worst, it’s callous abuse of power.

These divides in the Democratic Party are only going to become more pronounced as Pelosi’s grip slips further. The new Democrats’ private party will become increasingly raucous until it has lost all touch with normal Americans.

Moderate Democrats will have to continue answering for their colleague’s radicalism. Pelosi and the grandparents will not be invited along, but they will still be left cleaning up the mess.