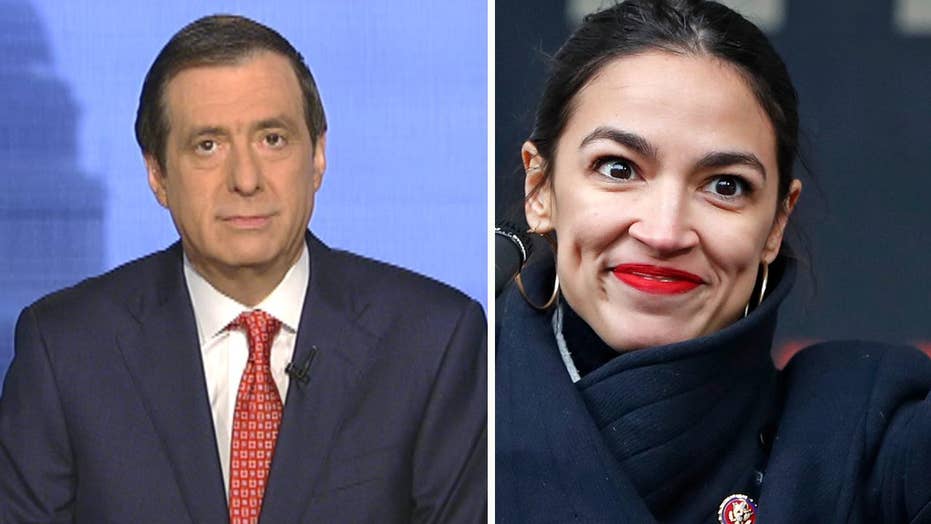 Howard Kurtz: When politicians try to trap each other on sensitive issues

'MediaBuzz' host Howard Kurtz weighs in on politicians attempting to trap each other on the record for supporting far-reaching proposals like the Green New Deal and gun control.

They are two of the most important, challenging and emotional issues facing the country: gun control and climate change.

They are suddenly the subject of intense debate on Capitol Hill, and drawing enormous media attention.

And yet, in classic congressional fashion, nothing will be done for the next two years.

Instead, both Democrats and Republicans are using the issues to score points against the other side. Maybe a healthy debate emerges as a byproduct, but at the moment, it’s all about political maneuvering.

Alexandria Ocasio-Cortez, as you may have heard, has been pushing a Green New Deal, and her own Democratic Party is deeply divided. Nancy Pelosi brushed it off, making clear it will never come to the House floor, at least not in its current form.

On the other hand, 70 House Democrats, not to mention several of the party’s presidential candidates, have jumped on the green train.

The Ocasio-Cortez plan contains some debatable environmental reforms, and has obvious appeal to Democratic voters who have been moving left and for whom global warming is an existential threat.

But the debate has gotten muddied by some of the more, shall we say, far-reaching proposals, including a paper that her office had to withdraw. This includes the notion that high-speed rail should be improved (fine) to the point that air travel would no longer be necessary; improving public transit with the goal of replacing “every combustion-engine vehicle”; and "economic security for all who are unable or unwilling to work."

Plus, AOC would pay for the plan in part by raising the tax rate to 70 percent on income over $10 million.

But you know who loves this plan? Mitch McConnell. In fact, the Senate majority leader loves it so much he has vowed to bring it to a floor vote.

The sole purpose would be to embarrass the Democrats, especially more moderate Democrats, by forcing them to cast a roll-call vote—and open them up to attack ads.

“We’ll give everybody an opportunity to go on record and see how they feel about the Green New Deal,” McConnell said. It doesn’t hurt the majority leader’s motivation that he’s from a coal state.

Meanwhile, the House Judiciary Committee has passed a bill to require background checks for all gun sales and most gun transfers, as well as closing a loophole that allows a gun to be bought if the background check takes more than three days.

This is significant because Democrats haven’t passed a gun-control measure since the Clinton administration. But it also has no chance of passing the Senate or being signed by Trump.

It’s no coincidence that Nancy Pelosi greenlighted this on the one-year anniversary of the horrible mass shooting at the high school in Parkland, Fla., which was already going to draw lots of media coverage. And Pelosi knows that gun control is a powerful issue, especially among Democrats.

But given the impossibility of final passage, the House speaker is trying to show her party’s base they care about regulating guns, and put Republicans on the record as opposing the measures—not unlike the McConnell move.

I’m not doubting the sincerity of those involved. But show votes, as opposed to real legislative compromise, are much of what Washington does these days.