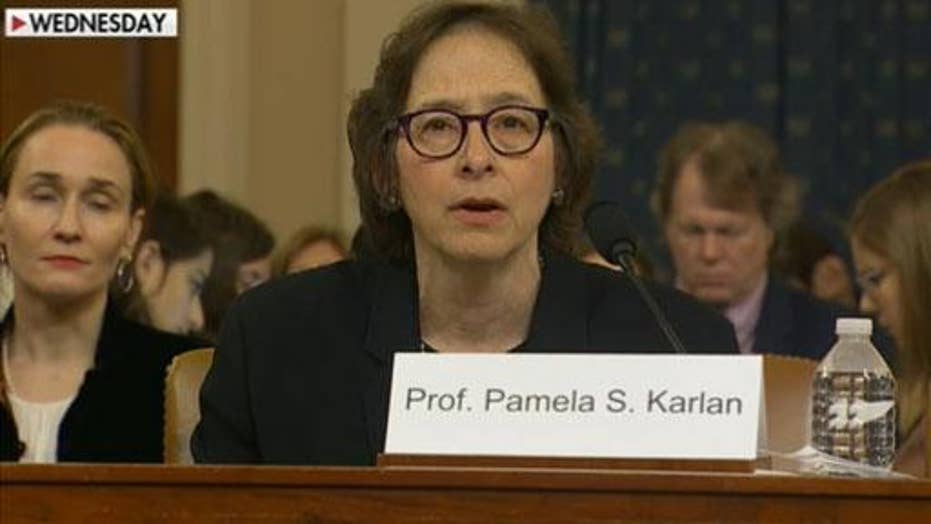 A former Hillary Clinton aide's organization has promoted Pamela Karlan -- the Stanford professor who referenced the president's son during an impeachment hearing this week -- as a possible Democratic choice for the Supreme Court nominee, raising more questions about Karlan's impartiality while testifying during the on-going impeachment inquiry.

Fallon's group has been pushing Democrats to release their list of nominees and demanded that the next SCOTUS picks include representatives of academia and other fields, rather than corporate law firms.

“It’s no surprise that radical liberal Pamela Karlan is on the Demand Justice shortlist for the Supreme Court," Judicial Crisis Network Chief Counsel Carrie Severino said in a statement to Fox News.

"Her particular brand of hateful, there-are-no-innocents political warfare defines the liberal elite today," she said. "Sadly, she is also representative of the alarming nominees the left would put forward if they had the chance. America, take note.”

Severino, who helped push Kavanaugh's confirmation, previously derided the list as a reflection of progressives' "radical policy agenda." "For every specific policy goal that the extreme left wants to implement, Demand Justice has provided a name — or two or three — of an ultra-liberal lawyer who has made that cause a focus of his or her activism," she wrote in October.

Released that month, the list offered a glimpse into who progressive activists favored for the next Democratic president's nomination.

Demand Justice did not immediately respond to Fox News' request for comment. In addition to teaching at Stanford, Karlan has an impressive background in the judicial system.

She previously served in the Obama administration as the U.S. Deputy Assistant Attorney General for Voting Rights in the Justice Department's Civil Rights Division. Demand Justice's website lists her previous roles as clerking for U.S. Supreme Court Justice Harry Blackmun, as well as Judge Abraham Sofaer. She received her law degree from Yale.

Conservatives like Severino have long decried the allegedly secretive nature of Democrats' picks for the court. Earlier in the summer, the group Alliance for Justice pushed an initiative called "Building the Bench," aimed at identifying progressive candidates for the next president's nomination.

It's unclear how long Karlan has been considered by progressive groups, but her recent comments are sure to cast a negative light on any future nomination.

Karlan received widespread condemnation from those at the White House, including first lady Melania Trump, who blasted Karlan for mentioning her son.

"The Constitution says there can be no titles of nobility, so while the president can name his son Barron, he can’t make him a baron," Karlan said during Wednesday's hearing.

Karlan eventually apologized but she appeared to harbor anti-Trump bias. Besides speaking as a witness for Democrats, Karlan also said she crossed a street in Washington, D.C. in order to avoid Trump's hotel.

“I came in from the airport yesterday and I got off the bus from Dulles down at L’Enfant Plaza and I walked up to the hotel and as I was walking past what used to be the old post office building and is now Trump hotel," Karlan told an audience in 2017. “I had to cross the street, of course.”