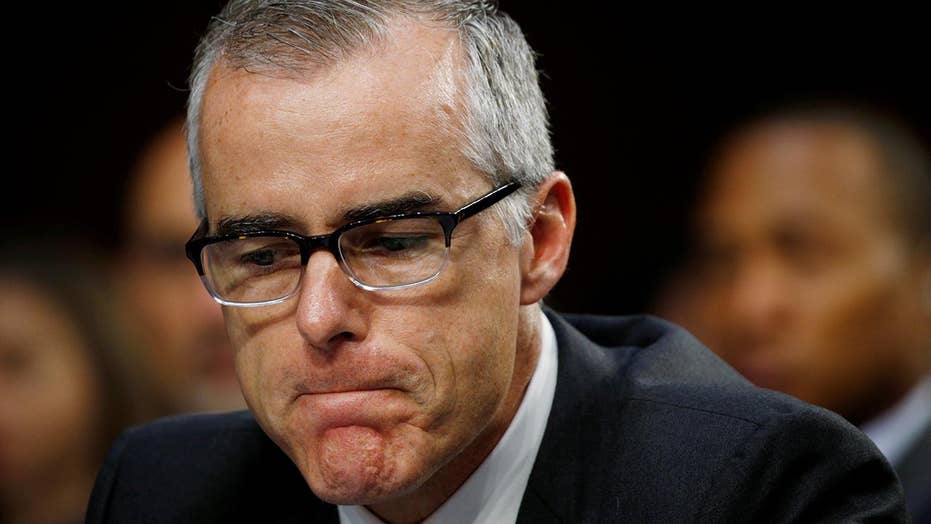 Bob Driscoll on the impact of the I.G. investigation.

A growing number of Democratic lawmakers are offering temporary jobs to ousted FBI official Andrew McCabe in an attempt to help him secure a full government pension after Attorney General Jeff Sessions fired him just two days shy of his retirement.

It’s not clear if the Democratic offers could even work or be accepted by McCabe. Asked by Fox News about the possibility, a source close to McCabe would only say the former FBI deputy director is “looking at all options.”

The idea was first floated Friday by MSNBC’s Andrea Mitchell after Sessions fired McCabe, who the attorney general said "lacked candor − including under oath − on multiple occasions."

“One suggestion from a McCabe supporter: if a friendly member of Congress hired him for a week he could possibly qualify for pension benefits by extending his service the extra days,” Mitchell tweeted.

McCabe was fired just days before he would have been eligible for a lifetime pension, meaning those benefits could now be in jeopardy -- something Democrats are trying to prevent.

Sessions said the DOJ’s inspector general determined McCabe was not truthful during his review of the Clinton email investigation and the FBI’s Office of Professional Responsibility recommended his firing.

Since then, at least four Democratic lawmakers have publicly offered jobs in their congressional offices.

“To Andrew McCabe: If you need a federal job, call me on Monday,” Rep. Luis Gutierrez, D-Ill., tweeted. “I am serious. We have to stand up to bullies like @realDonaldTrump & @jeffsessions.”

Massachusetts Democratic Rep. Seth Moulton replied to NBC’s Mitchell and tweeted: “Would be happy to consider this. The Sixth District of MA would benefit from the wisdom and talent of such an experienced public servant.”

Maryland Democratic Rep. Jamie Raskin tweeted: “Andrew McCabe: I have the need to hire a Special Senior Staff Attorney to help me with my work on the House Judiciary Committee dealing with threats to the Constitution and the rule of law in America. You're perfect for the job. DM me.”

Wisconsin Democratic Rep. Mark Pocan issued a press release on Saturday, saying he extended an offer to McCabe “so that he can reach the needed length of service” for his pension.

"My offer of employment to Mr. McCabe is a legitimate offer to work on election security,” Pocan said. “Free and fair elections are the cornerstone of American democracy and both Republicans and Democrats should be concerned about election integrity.”

The job offer idea has been mocked by Republicans.

“Wonderful idea,” Ari Fleischer, the former White House press secretary under George W. Bush, sarcastically tweeted. “Every member of Congress should hire fired bureaucrats who lied to an inspector general in the course of a government investigation. Pensions before Honesty. Great slogan.”

Despite the offers, it would be tricky for McCabe to make this work, federal employer lawyers said.

Joanna Friedman, a partner at the Federal Practice Group in Washington who focuses on federal employment law, told Fox News McCabe would have to be hired into a law enforcement officer position to keep his eligibility.

“I think it would be very difficult for a congressional member to hire him into the correct job series,” Friedman said. “I don’t really see how they have the authority or jurisdiction to put someone into a position like that.”

But Friedman said there’s nothing to prevent a lawmaker in Congress from hiring McCabe just because Sessions fired him.

“If someone wants to hire him, there’s nothing that stops it,” she said.

Horowitz determined that McCabe hadn't been forthcoming over questions about the FBI’s probe into Clinton’s use of a private email server while she was secretary of state. The inspector general’s finding sparked an FBI disciplinary process that recommended McCabe’s firing.

On Friday, Sessions said he accepted that recommendation and was firing McCabe for making “an unauthorized disclosure to the news media” and lacking “candor − including under oath − on multiple occasions.”