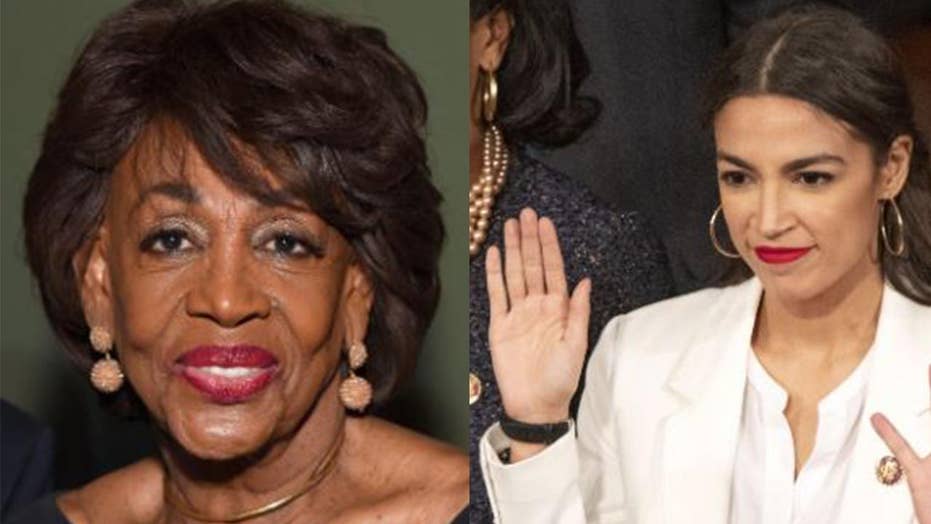 "I am very grateful for the opportunity to sit on this committee as a freshman, and look forward to working under the leadership of @RepMaxineWaters!" Ocasio-Cortez wrote on Twitter late Tuesday. "Financial Services is one of just four exclusive committees in the House. It oversees big banks, lending, & the financial sector."

MOST VOTERS BACK OCASIO-CORTEZ PLAN TO TAX RICHEST AMERICANS UP TO 70 PERCENT: POLL

The roles would afford the rising far-left Democrats a powerful platform to pursue the sweeping reforms they campaigned on, even as some moderate liberals voiced concerns that intra-party clashes would be inevitable. Ocasio-Cortez, 29, has suggested that the nation's largest banks should be broken up, and she shunned corporate donations during her House run last year.

Waters, the chair of the financial services committee, has vowed to counteract the Trump administration's 2018 rollback of the Dodd-Frank legislation, which the White House called "disastrous" and overbroad.

"Make no mistake, come January, in this committee, the days of this committee weakening regulations and putting our economy once again at risk of another financial crisis will come to an end," Waters said last year.

But other Democrats have sounded notes of caution about Ocasio-Cortez in particular, given her willingness to spar with Democratic leaders and her relatively radical agenda.

“I don’t know enough about her to be able to determine if she’s going to be a good member or what,” Missouri Democratic Rep. Lacy Clay, who sits on the financial services committee and who was challenged in 2018 by a Democratic candidate backed by Ocasio-Cortez, told Politico. “Time will tell, and this one term will tell us a lot about her abilities as a legislator.”

Another financial services committee member, New York Democratic Rep. Gregory Meeks, backed Ocasio-Cortez's appointment to the committee but told the paper that he had some reservations.

"I don't want a scenario like they had on the Republican side — I don't think we're going to get there — where you had a Freedom Caucus that ends up just trying to break and stop everything and any kind of progress," Meeks said. The conservative House Freedom Caucus frequently sparred with more moderate House Republicans, particularly on immigration, last year.

Ocasio-Cortez, 29, has made no secret of her progressive approach to the financial industry. She has called for "taxing Wall Street to support tuition-free public universities and trade schools," and has argued that the banks she will soon oversee have long held undue influence in American politics.

But she has struggled to explain how she would fund her proposals to provide Medicare for all and guarantee housing and education, and has falsely claimed that wasteful military spending could be reappropriated to pay for her laundry list of policy goals.

The news of the progressives' appointment to the financial services committee was a win for progressive groups, who just last week voiced their disapproval when House Democratic leaders passed over Ocasio-Cortez and Tlaib for membership on other powerful committees. The Steering and Policy Committee, chaired by House Speaker Nancy Pelosi, formally assigns members to committees.

Tlaib, 42, apologized earlier in the month for causing a "distraction" by calling President Trump a "motherf---er" and promising to impeach him. Just days later, she attracted negative press attention again by suggesting that some Republicans have a "dual loyalty" to the U.S. and Israel.

Tlaib was photographed this month wearing Palestinian robes with Sarsour, a proponent of Louis Farrakhan and the Nation of Islam. Farrakhan has compared Jews to termites and praised Hitler.

"They forgot what country they represent," Tlaib, a Palestinian-American who made history by becoming one of the first two Muslim women to ever serve in Congress, wrote on Twitter, referring to Senate Republicans pushing a pro-Israel bill during the ongoing partial federal government shutdown.

In the wake of those comments, Democratic Massachusetts Rep. Richard Neal, who chairs the House Ways and Means Committee, announced last week that Tlaib and Ocasio-Cortez had not been selected to join that panel. The Ways and Means Committee has vast authority over taxation, as well as Social Security and Medicare. New York Democratic Rep. Tom Suozzi was named to the panel instead of Ocasio-Cortez.

The far-left advocacy group Justice Democrats had called for Ocasio-Cortez, as well as California Rep. Ro Khanna, to be seated on Ways and Means. Responding to the snub by the committee, Ocasio-Cortez spokesman Corbin Trent said that "she hoped to be on it, but we're excited to see what committees she does get."

Khanna had also personally sought membership on that panel, and advocated for more freshmen representatives to be seated on powerful committees in general.

"Progressive representation on key House committees will decide whether or not we get Medicare For All, free college, a Green New Deal, and end to mass deportation and mass incarceration," Jusice Democrats said in a statement on their website.

Democrat Rep. Rashida Tlaib, who called Trump an expletive during an impeachment pitch, doubles down on the remark

The statement continued: "Nancy Pelosi and the Democratic leaders of the most powerful Congressional Committees are going to decide whether progressives or corporate-backed centrists will represent us in the fight for economic, racial, social and environmental justice."

Earlier this month, over the last-minute objections of Ocasio-Cortez and Khanna, House Democrats overwhelmingly approved most of a sweeping new rules package that effectively placed restrictions on some new spending. Progressive groups said the limitation would hinder them from realizing some of their more aggressive goals.

Ocasio-Cortez had voted with Khanna to oppose the so-called "pay-go" rule included in the rules package, supported by Pelosi. That rule requires that any new mandatory spending for entitlements or tax cuts be offset by other separate revenue increases (such as tax hikes) or budget-cutting measures so that the new spending does not expand the federal deficit.

The pay-go principle, Ocasio-Cortez charged in a tweet Wednesday, was a "dark political maneuver designed to hamstring progress on healthcare" and other legislation.

Also shot down was Justice Democrats' bid to have Tlaib placed on the Appropriations Committee, which announced a list of new members on Thursday that did not include Tlaib. The critical committee handles government expenditures.

“In my 12 years here, I don’t think there’s ever been a freshman on Approps, Ways and Means or Energy and Commerce," Kentucky Democratic Rep. John Yarmuth, who chairs the Budget committee, told Politico.  Democratic Reps. Ed Case and Ann Kirkpatrick are expected to join Appropriations instead.

But Justice Democrats has also campaigned for progressive California Rep. Katie Porter to join the financial services committee, a goal that was achieved on Tuesday.

Porter, a law professor, has repeatedly said she does not take money from corporate political action committees, which she characterizes as a corrupting influence.