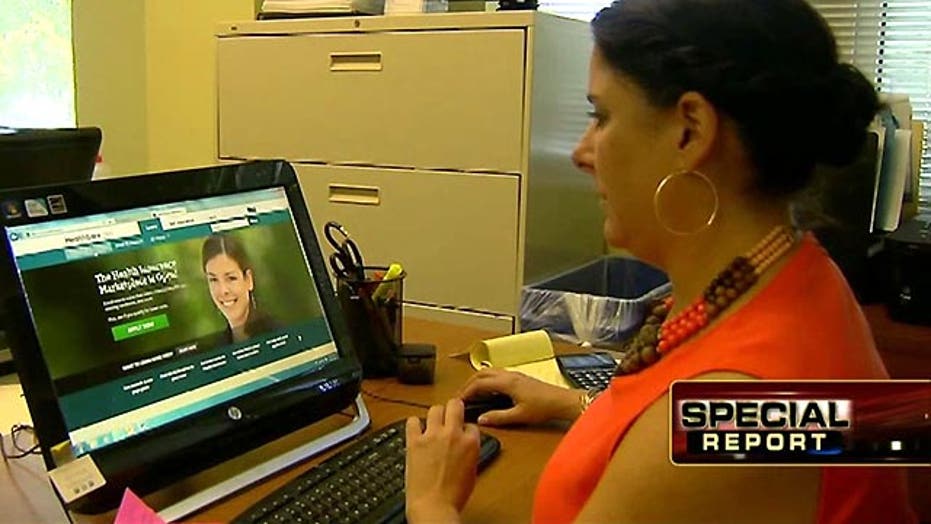 Elusive estimates of how many people actually were able to sign up for ObamaCare since enrollment launched more than two weeks ago are finally starting to emerge -- and, as expected, show a slow start amid widespread problems with the main federal website.

The federal government has not yet released its own enrollment figures. But private firms and analysts have taken a crack at it.

One private-sector analysis showed that, during the first week, less than 1 percent of those who entered the registration area actually enrolled.

The review was released by Kantar US Insights, based on the findings of the Millward Brown Digital research firm. It showed 9.47 million unique visitors to the federal site during the first week, including 3.72 million who entered the registration area, 1 million successfully registering and 36,000 who completed enrollment.

The administration is not yet producing its own figures.

Health and Human Services Secretary Kathleen Sebelius said Monday on Comedy Central's "The Daily Show with Jon Stewart" that she doesn't know how many people have enrolled but "hundreds of thousands of accounts" have been created on the federal site, HealthCare.gov.

Officials still have time to fix the myriad glitches on the website, before Jan. 1 when health-insurance coverage begins, and ultimately mid-February, when analysts say most Americans will have to sign up in order to avoid a tax penalty.

He said while the site glitches are "unacceptable," so is leaving millions without health insurance

The Obama administration disputed the Kantar US Insights assessment but provided only site-visit numbers.

The 14 states with their own ObamaCare websites, as well as the District of Columbia, are releasing some information about the number of enrollees in the first couple of weeks.

The Advisory Board Daily Briefing, a go-to site for enrollment tracking since signups started Oct 1, says more than 42,000 people have enrolled through the state-run exchanges. That estimate, though, is missing final numbers from several states.

Exactly how many Americans have signed up remains unclear because federal officials are not disclosing numbers for the problem-plagued site it runs for the 36 other states.

The administration still appears to have a long way to go toward the White House's goal of enrolling 7 million in the first year, though Americans can still submit off-line applications.

Experts point out the disparity in numbers is in part the result of groups using different approaches and time frames.

Peters also told The Post that the administration will release enrollment figures on a monthly basis but didn't provide a starting date. So most of the official data is meanwhile coming from the 15 local exchanges, with no indication about when a more comprehensive picture will emerge.

Maryland is among the states making public the most up-to-date numbers.

The state reported Friday that its website has had 217,091 unique visitors, 25,781 verified accounts created and 1,121 enrollees.

Officials did not respond to requests for more updated information, and to verify a news report that just 226 people bought health plans.

Carney said Americans continue to get information about ObamaCare through call centers and websites, despite "challenges" and that President Obama has instructed his team to "work 24/7" to address the website problems.