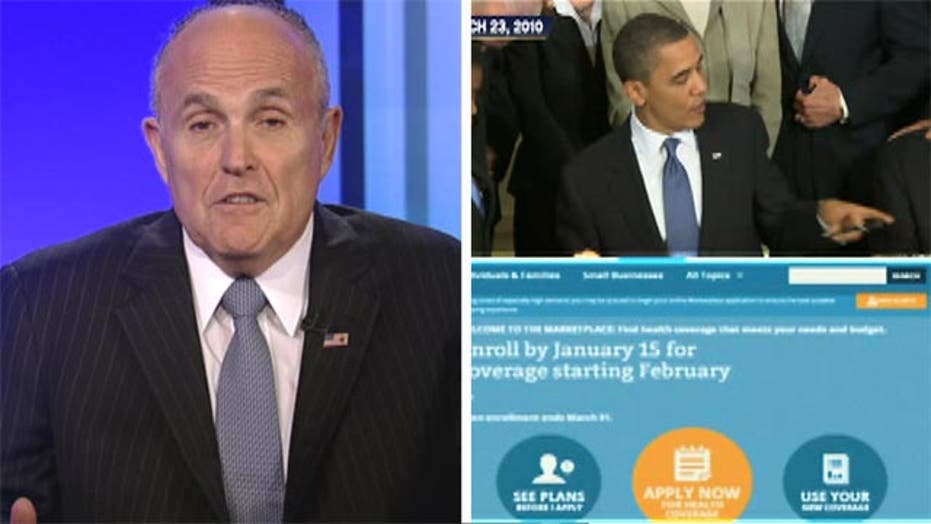 The hidden truth behind the ObamaCare enrollent numbers

What do the Health and Human Services' most recent stats on ObamaCare 'selection' really mean? How many have actually bought insurance plans? Former mayor Giuliani sounds off

In a blog post Monday, Kathleen Sebelius wrote, "More than 6 million Americans have now either signed up for a private health insurance plan through the Marketplace or for Medicaid coverage."

The issue with the numbers, as many Republican leaders are quick to point out, is that some of those 6 million were already enrolled in Medicaid. The junior senator from Mississippi cites an article on Yahoo Finance to back up his position.

And Wicker points to a new ABC News report hammering the Spanish language ObamaCare website for inaccuracies and its use of “Spanglish.” The site, CuidadoDeSalud.gov, launched two months late and contained a link to a form written in English.

Sen. Vitter tweets that in Louisiana, 93,000 people have lost coverage compared with 18,000 who have received Obamacare coverage.

Meanwhile  Dems continue the PR push on Twitter to show the exchanges are working.

You want Chris Christie tweets? I’ve got ’em by the truckload.

Everyone on Twitter and in cable news, it seems, is still chattering about the New Jersey governor—wait? What’s that?

Check out this message from Marriage Navigation:

“The public paid far more attention to last week’s cold snap than to the controversy swirling around New Jersey Gov. Chris Christie. There also has been little short-term change in opinions about Christie: 60% say their opinion of Christie has not changed in recent days, while 16% now view him less favorably and 6% more favorably.”

“The national survey by the Pew Research Center, conducted Jan. 9-12 among 1,006 adults, finds that just 18% paid very close attention to Christie’s apology on Jan. 9 for the highway lane closures ordered by his aides. By contrast, 44% very closely followed news about the cold winter weather that gripped much of the U.S. and 28% tracked news about the economy.”

Sounds like there’s a disconnect between the pundits and the people.

So let’s see how Twitter is keeping the story alive.

This isn’t about the George Washington Bridge payback scandal; there are now investigations into whether the gov improperly used hurricane relief funds for tourism ads starring him and his family. “New probe” is never good news for a politician under fire.

Not that Christie’s team is sitting on its hands, according to New York Times reporter Kate Zernike:

MSNBC is constantly covering the story, and that brings an appeal to the network’s president, aimed at one of Christie’s on-air defenders:

A positive sign for Christie fans: the latest poll.

And the New Yorker’s John Cassidy is hardly writing him off:

Now for the inevitable sports comparison, with Alex Rodriguez fighting Major League Baseball’s decision to ban him for 2014 because of drug use:

The nation’s capital is losing another longtime legislator, Dem George Miller from California. The leadership is wishing him well except for one Chuck Schumer, who isn’t just out a partisan pal, he’s out a roommate!