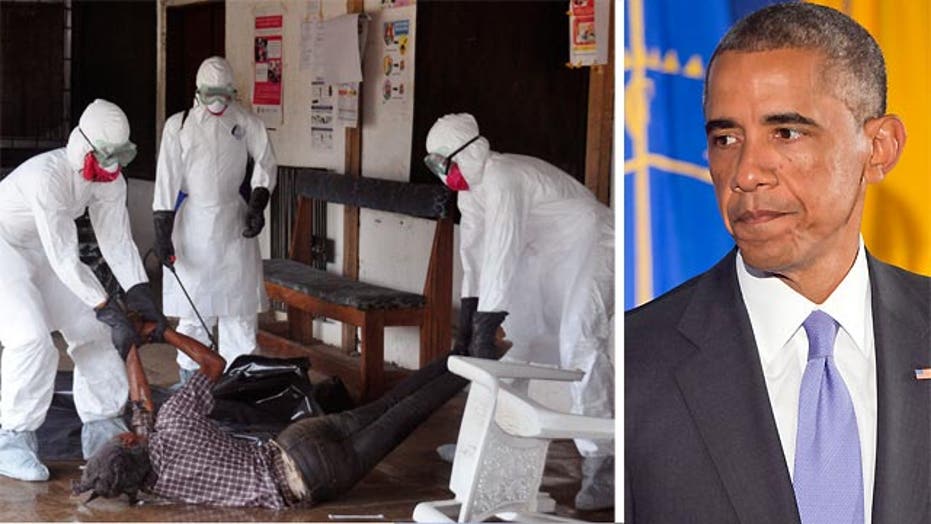 President to send US military personnel to combat Ebola

President Obama said Tuesday the United States will launch a major, military-led response in West Africa to the deadly Ebola outbreak that has reached epidemic proportions and now poses “a potential threat to global security.”

Obama announced the stepped-up effort against the virus, which has killed at least 2,400 people in five West African countries, at the Centers for Disease Control and Prevention in Atlanta.

He said the response was the largest in the Centers’ 68-year history and that the Defense Department was chosen to lead field operations because it was “better that any other organization on earth” in such efforts.

“It’s spreading out of control,” Obama said. “We have to act fast. We cannot dawdle on this one. We have to move with force.”

Published reports earlier in the day said Obama would announce that he was sending 3,000 military personnel. But he did not say in his roughly 15-minute announcement how many people would be deployed.

Obama said the U.S. would also lead the international response by providing medical and logistical support to help the region’s “overwhelmed” health-care systems. He also said he would increase the number of beds needed in the region to isolate and treat victims of the epidemic.

“Faced with this outbreak, the world is looking to the United States,” Obama said.

The president said the possibility of an outbreak in the United States is “extremely low.” However, he said officials are taking extra precautions including advanced airport screenings and preparing hospital personnel “in the unlikely event” the virus reaches this country.

The Defense Department has asked Congress for nearly $500 million in existing funds to be put toward the effort.

The new initiatives include training as many as 500 health care workers a week; erecting 17 health-care facilities with roughly 100 beds each; setting up a joint command headquartered in Liberia to coordinate between U.S. and international relief efforts; providing home health-care kits to hundreds of thousands of households, including 50,000 that the U.S. Agency for International Development (USAID) will deliver this week.

The fight against Ebola is considered, in part, a national security issue because the disease threatens fragile governments in Africa and could lead to more safe havens for terrorists. The request falls under the jurisdiction of the Pentagon because the military has the capacity to set up quarantine camps.

Officials told the Associated Press that it would take about two weeks for U.S. forces to get on the ground. The U.S. effort will include medics and corpsmen for treatment and training, engineers to help erect the treatment facilities and specialists in logistics to assist in patient transportation.

The administration’s decision to enlist the Defense Department has also raised concerns that the task is pulling the already-stretched military away from other missions, including vital counter-terrorism operations.

According to a senior military official, Gen. Martin Dempsey, Chairman of the Joint Chiefs of Staff, said at a recent meeting: "The Department of Defense's number one priority is combating Ebola."

The centers and the USAID are already involved.

The death toll in the Ebola outbreak is expected to reach 10,000 before six months from now. And Obama said Tuesday the number could reach the 100,000 without a full, urgent response.

Hardest hit by the outbreak are Liberia, Sierra Leone and Guinea. The virus also has reached Nigeria and Senegal. Ebola is spread through direct contact with the bodily fluids of sick patients, making doctors and nurses especially vulnerable to contracting the virus that has no vaccine or approved treatment.

Four Americans, including three doctors, have been or are being treated for the virus in the U.S.

On Monday, U.S. Ambassador to the United Nations Samantha Power called for an emergency meeting of the U.N. Security Council on Thursday, warning that the potential risk of the virus could "set the countries of West Africa back a generation."

Power said the meeting Thursday would mark a rare occasion when the Security Council, which is responsible for threats to international peace and security, addresses a public health crisis.