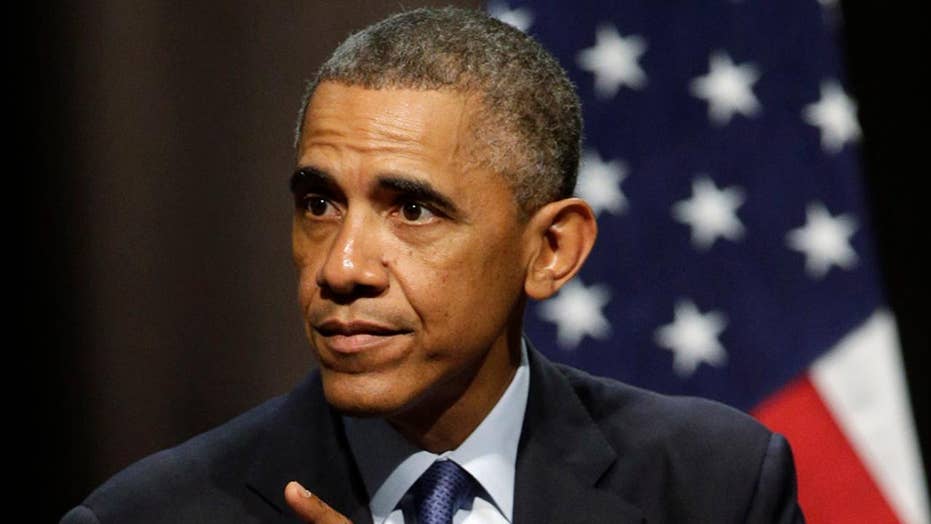 Calling the office of the presidency “bigger than any one person,” President Obama on Monday said the influence America has on a global scale will not be erased by the outcome of one election and added that Donald Trump told him the U.S. would reaffirm its commitment to the NATO alliance.

As a candidate for president, Trump said other members of the treaty organization did not contribute enough for the protections it gets in return. Trump’s position seemed to change on the topic in recent days.

Obama called the president-elect’s new support of NATO “one of the most important functions” he will be able to relay during his upcoming three-country tour.

“There is no weakening of resolve,” Obama said.

HOW PRESIDENT TRUMP COULD SAVE BREXIT

Domestically, Obama admitted last week’s major losses for the Democratic Party across the country were a political blow but encouraged his party “not to waver on our core beliefs and principles.”

“When your team loses, everybody gets deflated,” Obama said. He added, “It’s important for me not to be bigfooting that conversation.”

The president was also questioned on the status of his legacy laws, including ObamaCare, under a Trump administration and a Republican House and Senate.

“Now that Republicans are in charge, they’ve got to take a look and say, let’s see,” Obama said. “We got 20 million people who have health insurance who didn’t have it before. Health care costs generally have gone up at a significantly slower rate since ObamaCare was passed than they did before, which has saved the federal Treasury hundreds of billions of dollars.”

The president then dodged a question about concerns some minorities and other groups have about Trump’s decision to name Steve Bannon as his chief strategist and economic adviser.

“I think it’s fair to say that it would not be appropriate for me to comment on every appointment that the president-elect starts making if I want to be consistent with the notion that we are going to try to facilitate a smooth transition,” he said.

However, he did note that during his 90-minute meeting with Trump last week, he told him it was important to send signals of unity early on.

“But the people have spoken,” Obama said. “Donald Trump will be the next president, the 45th president of the United States. And it will be up to him to set up a team that he thinks will serve him well and reflects his politics. Those who didn’t vote for him will have to recognize that that’s how democracy works. That’s how this system operates.”

Just days ago, Obama and Trump were attacking one another on policy issues.

Trump ran his campaign on promises to gut most of Obama’s signature policies. The president spent the majority of the 2016 presidential election season calling out his now-successor, saying he was “temperamentally unfit” for the job. Since then, Obama has said his main goal going forward would be to facilitate a smooth transition of power.

Following the press conference, the president will head out on his last major trip abroad where he’ll likely face similar questions from his foreign counterparts. And though Obama has urged unity and said the U.S. must root for Trump’s success, the president’s trip to Greece, Germany and Peru forces him to confront global concerns about the future of America’s leadership.

"The mood of Greek people for this political change is 'wait and see,'" said Nikos Pappas, a minister of state with close ties to Prime Minister Alexis Tsipras, in an interview. He said there was surprise in Greece, as elsewhere, about Trump's victory, but added: "Everybody would be expecting the U.S. government is going to continue to be on our side."

Obama's trip, planned when it seemed certain Hillary Clinton would win, had been designed to reassure the world that the U.S. had regained its footing after a toxic campaign that unnerved foreign capitals, noted Heather Conley, a Europe scholar at the Washington-based Center for Strategic and International Studies.

"Now the president has the unenviable task of telling his counterparts and explaining what Europeans are now coining 'the Trump effect,'" Conley said.

For months, Obama lent credence to those concerns as he urged Americans to reject Trump. Standing alongside Singapore's prime minister in August, Obama said Trump was "woefully unprepared" because he lacked "basic knowledge" about critical issues in Europe, Asia and the Mideast. And during a visit to Japan, Obama said world leaders were rightfully "rattled" by Trump.

Now, Obama must reassure the U.S. and other countries that somehow, it will all be OK.