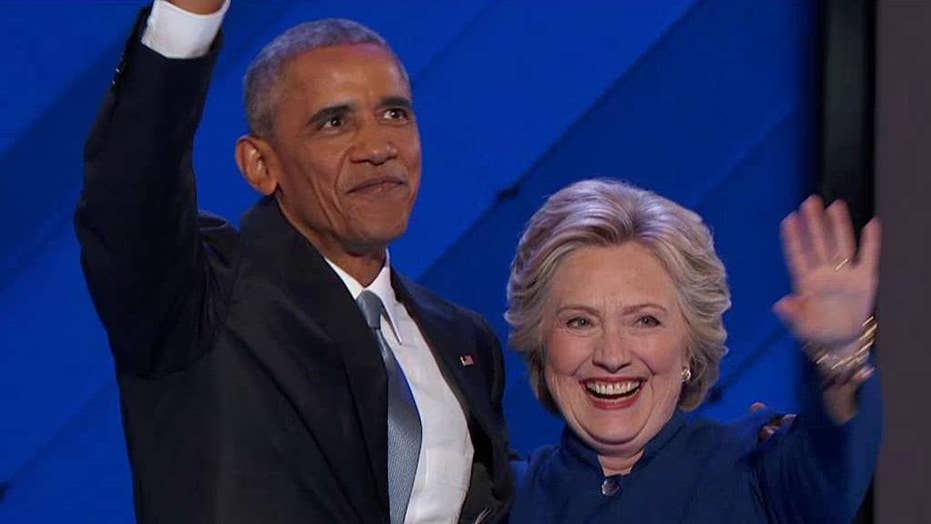 PHILADELPHIA – President Obama and Tim Kaine tag-teamed to deliver a scorching warm-up Wednesday for Hillary Clinton to accept the party’s nomination for president at the Democratic convention, with the president accusing Republican Donald Trump of only offering “slogans” and “fear” – and Clinton’s newly tapped running mate almost upstaging the commander-in-chief with his gusty impression of the billionaire’s New Yawk bravado.

Framing the election as a choice between pessimism and optimism, Obama endorsed Clinton as a tough and tenacious leader, saying “she is fit” and “ready” to be the next commander-in-chief – while rejecting Trump’s claim that only he can cure the nation’s ills.

Of Clinton, he said: “There has never been a man or a woman – not me, not Bill, nobody – more qualified than Hillary Clinton to serve as president of the United States of America.”

As the kicker, Clinton surprised the crowd by showing up onstage with Obama at the end of his speech, the two of them hugging and waving to delegates who were holding up "thank you" signs.

The president’s convention embrace of his one-time political rival is sure to fuel a central charge of Republicans in the general election – that Clinton represents a third Obama term, and the status quo. Without question, the sitting president depends on his former secretary of state to help preserve his legacy, and fend off recurring Republican attempts to repeal ObamaCare, upend environmental regulations and more.

To that end, Obama and a host of speakers on the convention’s third night intensified their attacks on Trump, as they talked up Clinton’s qualifications.

“The Donald is not really a plans guy. He’s not really a facts guy, either,” Obama said. “He calls himself a business guy, which is true, but I have to say, I know plenty of businessmen and women who’ve achieved remarkable success without leaving a trail of lawsuits, and unpaid workers, and people feeling like they got cheated.”

Obama also used the platform to defend his record in office, declaring he’s “more optimistic about the future of America than ever before.”

Trump countered on Twitter: “Our country does not feel 'great already' to the millions of wonderful people living in poverty, violence and despair.”

The night in Philadelphia was replete with barbed insults even as the musical acts kept returning to themes of “love” and understanding. Senate Democratic Leader Harry Reid lit into Trump earlier in the night, calling him a “hateful con man” and “egomaniac.” Former Maryland Gov. Martin O’Malley, an ex-Clinton primary rival, gave a fiery speech calling Trump a “bully racist.”

Obama’s address, marking a passing of the torch to the woman he defeated for the nomination eight years ago, was delivered shortly after delegates finalized the party’s 2016 ticket. In an overwhelming voice vote, they nominated Virginia Sen. Kaine for vice president.

Kaine himself, after starting off talking family and faith, shifted gears in the second half and shelved his nice-guy persona to deliver a broadside against Trump, as he accepted the VP nomination from his party.

“Hillary has a passion for kids and families. … Donald Trump has a passion too: It's himself,” Kaine said. The senator was merciless after that. He went on to mock Trump, imitating his Queens accent when he says, “Believe me.”

“We're gonna destroy ISIS so fast -- believe me! There's nothing suspicious in my tax returns -- believe me!” Kaine bellowed, as the crowd roared with laughter. “Here's the thing. Most people, when they run for president, they don't just say ‘believe me.’ They respect you enough to tell you how they will get things done. … You cannot believe one word that comes out of Donald Trump's mouth.”

The senator also delivered several lines in Spanish as he recalled his long-ago work with Jesuit missionaries in Honduras.

While he was speaking, the Trump campaign was firing out press releases ripping Kaine as a “job killer” and part of the Washington establishment.

“He’s trying to tell us he cares about the middle class. Give me a break. That’s a bunch of malarkey,” Biden said.

Remnants of the noisy factions that have disrupted proceedings since the week’s start flared up again during the Kaine voice vote – with a large section of the California delegation chanting, “Roll call! Roll call!” – and during ex-Defense Secretary Leon Panetta’s remarks. But some of the unrest has subsided, as party elders have methodically worked since Sunday – when they ousted party Chairwoman Debbie Wasserman Schultz over a leaked email scandal – to convince Bernie Sanders’ soldiers to lay down their arms.

Former New York City Mayor Michael Bloomberg, who had considered an independent presidential run before ruling it out, made a late appearance Wednesday – with an endorsement that could help Clinton reach out to vital independents whom Trump also is courting, and a bagful of zingers aimed squarely at his fellow billionaire.

“Trump says he wants to run the nation like he’s run his business. God help us!” Bloomberg said, calling him a “dangerous demagogue” and claiming it’s “imperative” to elect Clinton.

The focus of the third convention night was heavy on gun control, global warming and even national security, an issue largely absent from the first two nights.

Obama delivered his address just weeks after his Justice Department closed the books on its investigation into Clinton’s improper use of a private server and email while secretary of state, opting to pursue no charges. Despite allegations from Republicans of political favoritism, the decision helped clear away one of the last major hurdles to her nomination going into the Philadelphia convention.

Together, the speakers Wednesday set the stage for Clinton to deliver her nomination acceptance speech and close out the convention Thursday night, after becoming Tuesday the first woman in U.S. history nominated for president by a major party.

The president’s speech Wednesday effectively kicks off Obama’s general election role as a chief Clinton surrogate. The New York Times reported that aides mostly have cleared his calendar for October and expect him to be on the trail regularly for Clinton until the election.