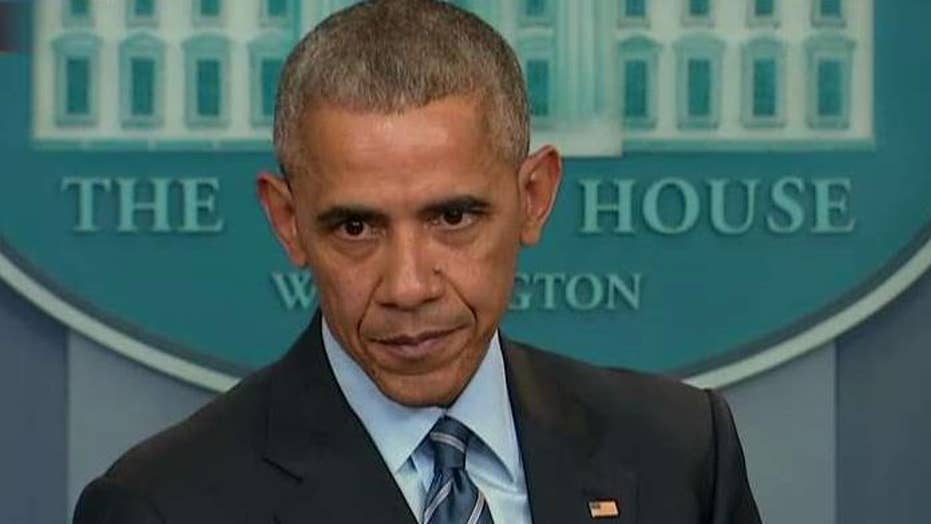 Obama feels sense of responsibility for suffering in Syria

But president stands by U.S. response to the crisis

The Obama administration is finding itself back on the defensive over its Syria policy as Aleppo falls to Bashar Assad’s government and civilians are evacuated, an operation preceded by desperate pleas from the city’s battered residents and reports of atrocities against them.

Ambulances reportedly were carrying out the first groups of wounded and other residents on Thursday, under a cease-fire deal that would seal a rebel pullout from what had been their stronghold in the eastern part of the city.

Outgoing Secretary of State John Kerry told reporters Thursday he was “encouraged” by the cease-fire arrangements as well as the start of convoys moving out of the city.

But he also cited a report that a convoy of injured people were fired upon, and reports that Syrian men are being detained or conscripted at checkpoints. He condemned “inexcusable attacks” on civilians and humanitarian personnel, calling for an “immediate and verifiable, durable cessation of hostilities.”

“We’re going to continue to do our part” to push all parties toward “resolution,” Kerry said.

At the same time, Kerry noted that if Aleppo falls completely, it will be harder to bring the parties around and will not end the war.

He put the onus on Damascus and its allies in Moscow to pursue peace. Within minutes, State Department spokesman John Kirby took the podium and was peppered with tough questions about how the administration sees any political transition or deal playing out at this stage.

Asked whether the U.S. is prepared to take action beyond talks, Kirby said it was determined that military options will not “get us to the end we seek,” while insisting the U.S. is “leading” and acting on behalf of the Syrian people. He conceded diplomacy has fallen short so far.

In a feisty exchange at the White House press briefing a day earlier, Press Secretary Josh Earnest also was pressed repeatedly by reporters on the U.S. government’s policy. President Obama famously drew a “red line” with Syria in 2012 over the use of chemical weapons and then opted not to enforce it after evidence surfaced the line was crossed.

“It’s offensive to somehow suggest that the United States government and the world is not doing anything,” Earnest said Wednesday.

He defended using diplomatic efforts rather than military force to seek an end to the fighting.

“I think the Assad regime has demonstrated that they’ve crossed all the lines in pursuit of their goals,” Earnest said, adding he didn’t know what kind of “sick mind” comes up with the strategy Russia and Assad are pursing.

“Those goals apparently include depraved tactics like trying to starve innocent civilians into submission, bombing hospitals and playgrounds, targeting them,” he said.

“I can’t believe he can stand here and make a statement like that,” Keane said Thursday on Fox News. Keane said Obama had the right to respond militarily after Assad used chemical weapons on his own people but “was paralyzed by the fear of adverse consequence [that] could happen from that.”

But, Keane added, “There’s consequences from doing nothing.”

Kirby also faced tough questions earlier this week from a reporter who pressed him on why the U.S. did not go beyond diplomatic calls to help civilians stranded in the Syrian city.

“You’ve failed repeatedly doing the same thing over and over again, which is a combination of trying to bring together people in some sort of talks with, sort of, imperfect cease-fire and then when things go badly you get really angry … and then nothing ever changes,” the reporter charged.

Kirby said Kerry stressed the need for an immediate end to civilian deaths in Aleppo. He also blamed Shia fighters for violating a truce secured Tuesday but broken hours later.

At the annual Saban Forum on Sunday, Kerry admitted the administration’s failure to enforce the red line threat had “cost” the U.S. “significantly” in the Middle East in terms of a damaged reputation.

But Kerry insisted it was Congress that dropped the ball and not Obama, by not formally authorizing military force.

"People have interpreted it as his decision not to when, in fact, he never made a decision not to bomb,” Kerry said. “He made the decision to bomb. He simply decided he had to go to Congress because David Cameron lost the vote in the parliament on a Thursday, and on Friday, President Obama felt … he would go [to Congress] and get the decision. Well, the decision wasn’t forthcoming, and in the meantime, I got a deal with Lavrov to get all of the chemical weapons out of the country."

The deal with Lavrov was cast as reducing the pressure on the West to intervene in Syria. But as Russia subsequently increased its involvement in the war, Assad’s hold on power strengthened. The war became increasingly complicated as the United States turned its attention toward targeting Islamic State forces, following a largely ineffective effort to arm moderate rebels.

In some circles, any large-scale intervention in Syria was seen as a losing campaign. By punting to Congress, Obama simply avoided the entanglement.

But some lawmakers insisted all along there were middle-ground options that could have reduced the bloodshed in Syria.

“It did not have to be this way,” Sens. John McCain, R-Ariz., and Lindsey Graham, R-S.C., said in a statement. “But this is the inevitable result of hollow words and inaction, red lines crossed without consequences, tarnished moral influence, ‘leading from behind,’ and a total lack of American leadership.”

They said “the name Aleppo will echo through history, like Srebrenica and Rwanda, as a testament to our moral failure and everlasting shame,” while predicting the Assad regime will use the cease-fire to “reset its war machine and prepare to slaughter its way to victory across the rest of the country.”

Despite the criticism of the Obama administration’s lack of action, it’s unclear what President-elect Trump plans to do. Aleppo’s fall to Syrian government forces could be his first major test of how he plans to approach Russia, with which he has sought friendlier ties.

Currently, the situation in Aleppo is fluid.

According to Reuters, the International Committee of the Red Cross said the evacuation of 200 wounded people had begun. Russia, an ally of Assad, claimed 5,000 Syrian rebels and family members had been brought out of eastern Aleppo, though those claims could not be confirmed.

The evacuations come after two weeks of rapid advances by the Syrian army, aided by Russian air power and Shi’ite militias, in a part of the city held by rebels for four years.