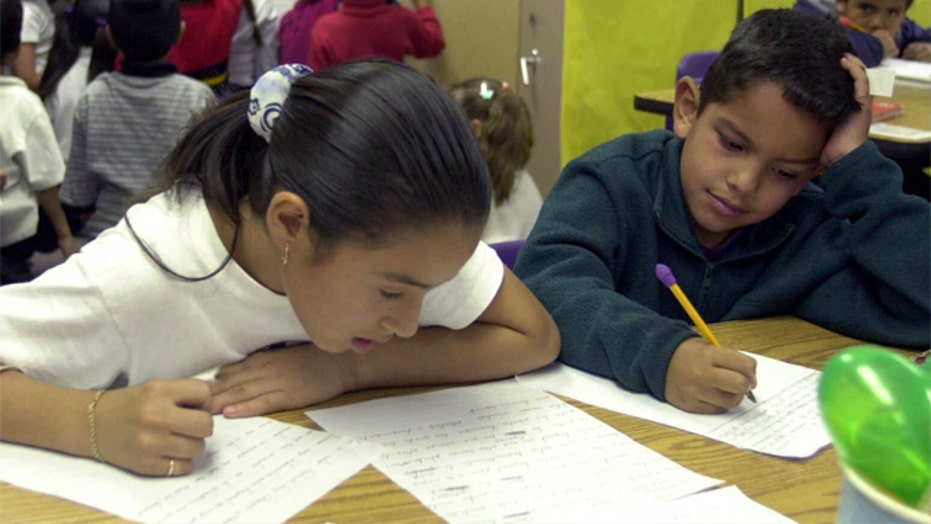 GOP plans dramatic changes to 'No Child Left Behind'

The Obama administration is gearing up for a battle with congressional Republicans over one of the signature domestic policies of the George W. Bush administration, No Child Left Behind.

Both parties want to overhaul the controversial policy. But ironically, it is Republicans who are poised to be more aggressive.

With Republicans newly in charge of both houses of Congress, Senate education Chairman Lamar Alexander, R-Tenn., has said his top priority is fixing the law, which expired in 2007. His first hearing is expected next week with a focus on testing. Both he and House education Chairman John Kline, R-Minn., have said the federal government needs to get out of the business of deciding what to do about low-performing schools, education standards and teacher evaluations.

Alexander said in a statement that the committee expects to send a bill to the Senate early this year. "My goal is to keep the best portions of the original law and restore to states and communities the responsibility for deciding whether teachers and schools are succeeding or failing," he said.

While both sides contend that the education law relies too much on standardized testing, Republicans seem keener to curb testing requirements while handing control back to state and local governments.

The White House, meanwhile, is urging some level of testing while pushing for spending nearly $3 billion in next year's budget for programs aimed at boosting education for low-income, minority and disabled students.

In an address on Monday, Education Secretary Arne Duncan made the Obama administration's case for continued testing.

"I believe parents, and teachers and students have both the right and the absolute need to know how much progress all students are making each year towards college and career readiness," Duncan said.

He said that too many 16- and 17-year-olds find out too late they aren't prepared for college, and "those days must be over."

Duncan acknowledged there are places where tests -- and test preparation -- take up an excessive amount of time. He urged Congress to provide money to states to improve the quality of their tests and to have states set limits on time spent on standardized testing.

Duncan said he's "deeply concerned about where some Republicans are headed."

His speech -- on the 50th anniversary of President Lyndon Johnson's introduction of a landmark education equity bill -- was the Obama administration's latest effort to make its case for federally mandated testing. Civil rights groups and state education chiefs have also voiced support for it.

No Child Left Behind, signed into law in 2002 by President George W. Bush, requires that states annually test students in reading and math in grades three to eight and once in high school.

The law requires schools to show annual growth in student achievement or face consequences.  It has been credited with putting a focus on how schools handle minority, low-income, English learners and special needs students, but also has led to complaints that teachers were teaching to standardized tests and that mandates were unrealistic and penalties ineffective. Beyond the federal requirements, many districts and states require other standardized tests.

Since 2012, President Obama has allowed states to get a waiver from some of the more stringent requirements of the law, but they had to agree to requirements such as implementing teacher evaluation systems with teeth.

There's been widespread agreement that the comprehensive law needs to be fixed, but disagreement over how to do it.

The National Education Association, a teachers union, wants Congress to adopt a federal requirement that students be tested just once in elementary, middle and high school. "Parents and educators know that the one size fits all annual federal testing structure has not worked," NEA President Lily Eskelsen GarcÏ†a said in a statement. She said states and districts should be given flexibility in deciding how to use testing to identify achievement gaps.

On Sunday, a coalition of 20 civil rights groups said one of their top priorities with the reauthorization is continuing the federal annual testing mandate.

"The reason is simple: Kids who are not tested end up not counting," Kati Haycock, president of the Education Trust, wrote in a blog accompanying the release by the civil rights groups

The Council of Chief State School Officers said it supports annual testing because "every parent has a right to know how their child is performing academically in public school."

One reason the testing issue has been an area of focus is because of the role the results can play in teacher evaluations. Last year, Duncan said states can apply for extra time before they use student test scores to judge educators' performance.

Another factor is that millions of students this spring for the first time will take new Common Core-based assessments.

Several states and districts are already reviewing the quality and quantity of the tests given.

Duncan said that Obama's proposed budget will include $2.7 billion for enhanced programs under the Elementary and Secondary Education Act.

Fox News' Carl Cameron and The Associated Press contributed to this report.