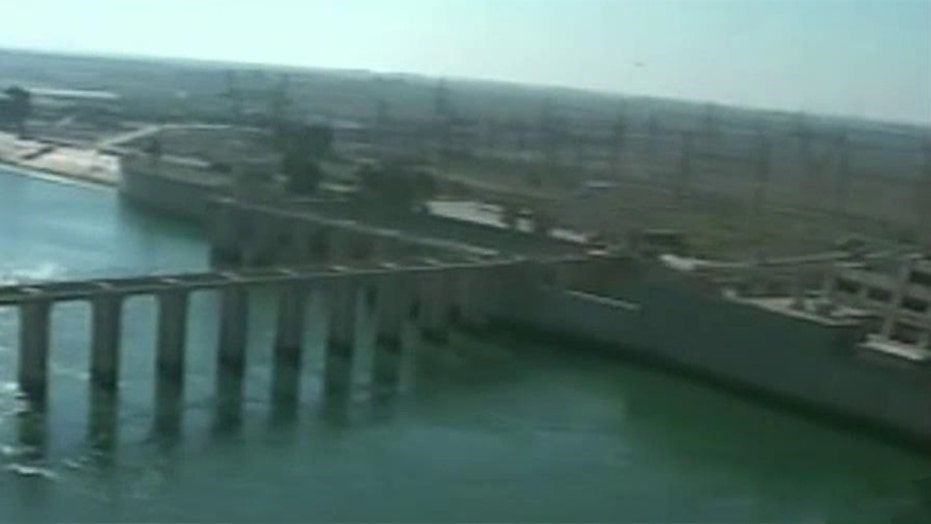 US launches airstrikes to protect Haditha Dam from ISIS

As the unnamed U.S. air campaign over Iraq turned one month old on Monday, the Pentagon and White House continued to deny the fight against the Islamic State has grown into something larger than originally intended.

The U.S. military is not, they say, engaged in "mission creep."

White House Press Secretary Josh Earnest on Monday rejected that characterization when asked whether the U.S. mission was gradually expanding beyond the narrowly defined purpose of safeguarding American assets. He was asked specifically about a new operation over the weekend striking targets around Haditha Dam, about 175 miles northwest of Baghdad, and compared that operation to the one to recapture the Mosul Dam.

"The way that it's been described to me is that there is a threat that if ISIL decided to destroy the Haditha Dam that it could threaten or would threaten the airport downstream from the dam," Earnest said.

"Mission creep refers to the growth or expansion of the goals and objectives of a military operation, that the goals and objectives change, morph into something bigger than they were at the outset,” Kirby explained. "Nothing has changed about the missions that we're conducting inside Iraq. ... Airstrikes are authorized under two mission areas -- humanitarian assistance and the protection of U.S. personnel and facilities."

But many observers would argue that the mission has changed -- that the "goals and objectives," as Kirby explained it, have morphed into something bigger.

The total number of U.S. airstrikes to date, as of Monday afternoon, was 148. And the cost of the operations in Iraq is estimated at $7.5 million per day.

On Wednesday, President Obama is expected to outline a new plan to address the ISIS threat. But already, he and members of his administration have increased the rhetoric in their shared talking points, using some variation of the words "dismantle," "degrade," "defeat," and "destroy" when it comes to describing how the U.S. will confront ISIS.

Speaking with NBC News over the weekend, Obama said: “We are going to systematically degrade their capabilities, we're going to shrink the territory that they control. And ultimately we're going to defeat them."

Speaking earlier from the White House, though, Obama also said: "American combat troops will not be returning to fight in Iraq, because there's no American military solution to the larger crisis in Iraq."

But others in his administration have repeatedly forecast a broader and longer struggle.

Vice President Biden last week proclaimed the U.S. would "follow them [ISIS] to the gates of Hell until they are brought to justice."

Secretary of State John Kerry said last week the mission could go on for "years."