A top New York Police Department union official on Friday called on Mayor Bill de Blasio to “own” the consequences of the city’s sanctuary policies -- while insisting officers want to be allowed to work with federal immigration enforcement -- after an illegal immigrant who was freed in November is alleged to have sexually assaulted and murdered a 92-year-old woman.

“The mayor can say what he wants to say -- he owns this,” Sergeants Benevolent Association Vice President Vincent Vallelong told reporters. “He should step up and say these are his policies, he owns it.”

The remarks came at a press conference led by Immigration and Customs Enforcement (ICE) Acting Director Matthew Albence in New York, days after the deadly consequences of the city’s policy again made headlines due to the murder this month of 92-year-old Maria Fuertes.

Reeaz Khan, an illegal Guyanese immigrant, is accused of attacking Fuertes as she walked home on Jan. 6. Fuertes was reportedly found at 2 a.m. in 32-degree weather and near death on a sidewalk with her clothes pulled above her waist. She was taken to a hospital, where she died from injuries that included a broken spine, according to The New York Post. The Post cited law enforcement sources who said she had been sexually assaulted and strangled.

ICE revealed this week that it had issued a detainer -- a request that ICE be alerted of an illegal immigrant’s release from custody so that they can be transferred into ICE custody and go through deportation procedures -- in November for Khan.

But the NYPD followed the city’s sanctuary policy -- which limits cooperation with federal immigration authorities and means that most detainers are ignored -- and released him without informing ICE.

“A phone call, one simple phone call and Maria Fuertes could be alive today,” a visibly furious Albence told reporters.

The horrific crime has fired up a fresh fight between de Blasio and the Trump administration, which says that the murder is yet another example of a policy that puts law-abiding Americans in danger. Acting Department of Homeland Security Secretary Chad Wolf said the case showed that New Yorkers are “facing the deadly consequences of the sanctuary policies.”

De Blasio responded by claiming that the policy had made the city safer, and also said there were some crimes serious enough that the city would cooperate with federal immigration officials. He also adopted a pro-cop stance and told Wolf to “quit spreading lies about the good work of the NYPD.”

But according to the SBA, New York police want to work with ICE and help them catch illegal alien criminals.

“I can guarantee you every single one of our members wants to help them out, unfortunately, the way the policies are set up, they don't allow us to,” he said. “How do we have our own hands handcuffed to not be able to work with these guys? 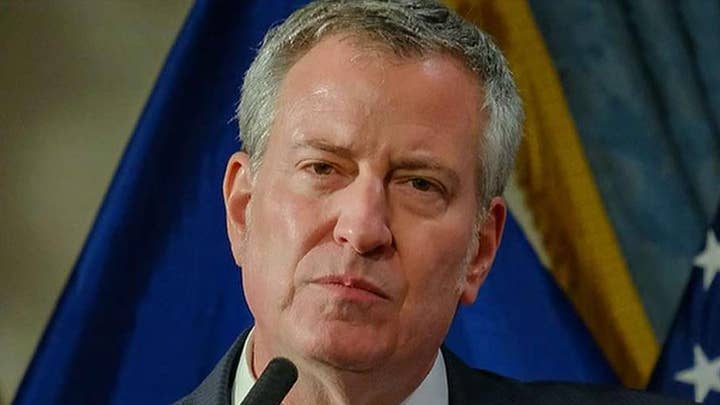 “We’re here not to ... pick and choose what crimes are out there, we’re here to actually enforce the law and that's exactly what these guys are doing and that’s why we’re here to support them today,” he said.

Albence said that he had been told the same thing by cops enforcing the law in the Big Apple and elsewhere -- telling reporters that police “hate” sanctuary city laws.

“Go ask the line cops in any jurisdiction -- they hate these things, and I’ve talked to many,” he said. “A lot of these guys are repeat offenders, they are violent offenders and these cops are out there day after day putting their lives on the line and it’s got to be incredibly frustrating for them to arrest these guys, knowing they're here illegally, knowing that ICE could get them off the streets and three weeks later they're arresting them again for a more dangerous crime or a more heinous crime.”

Albence cited statistics saying that last year ICE lodged 7,526 detainers via its New York field office. Those individuals accounted for 17,873 criminal convictions and 6,500 criminal charges. Those charges and convictions include over 200 homicides, over 500 robberies, over 1,000 sexual offenses, over 1,000 weapons offenses and over 3,500 assaults. Only 10 detainers were honored.

Albence expressed anger at an initial denial from the city that there had been a detainer issued at all -- a denial that led ICE to post online the fax receipt showing it had in fact been sent.

“If you’re going to have a sanctuary city policy and you know it's going to result in people going back out to the street and committing more crimes, at least own it, at least stand up and say 'yeah that’s our policy,'” he said. “Own it, don't sit there and try to push the blame onto someone else -- it’s disgusting.”