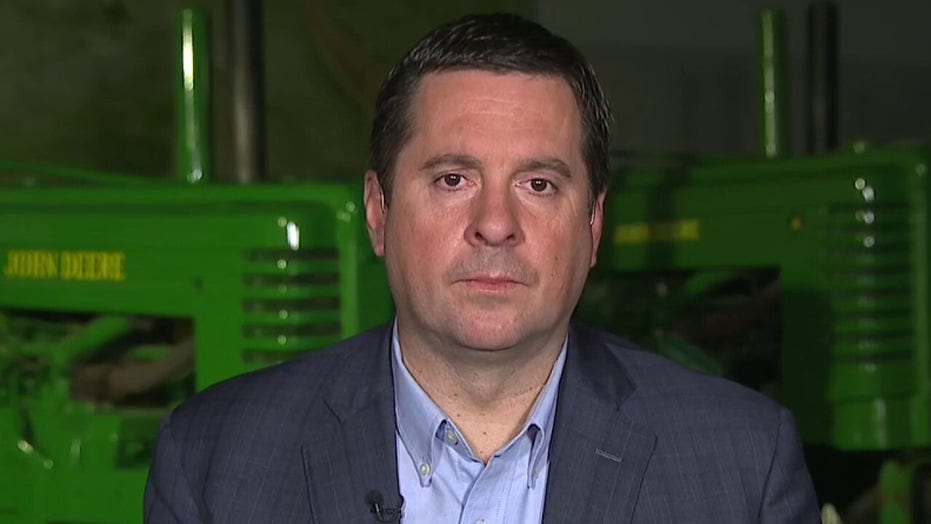 Rep. Devin Nunes, R-Calif., slammed China's handling of the coronavirus, which originated in the Chinese city of Wuhan, in an interview with Maria Bartiromo on "Sunday Morning Futures."

Nunes, the ranking member on the House Permanent Select Committee on Intelligence, also mentioned that his committee was drafting legislation against the country, which is controlled by the Chinese Communist Party, based on an investigation it has been conducting.

"They're inefficient ... They have people that are under authoritarian control. Think about it, the doctor that actually was the whistleblower on this ended up dead," Nunes said. "If you look back to what the Chinese did, they probably had this in the late fall, especially early winter. Instead of like calling people in and learning how to help and develop a way for us to know how to treat this, they downplayed it."

Nunes' comments come as China has complained about American politicians and publications blaming China for the pathogen, which causes a disease officially known as COVID-19, and its spread.

"Although the epidemic first broke out in China, it did not necessarily mean that the virus is originated from China, let alone 'made in China,'" Chinese Ambassador to South Africa Lin Songtian tweeted on March 7.

More recently, Chinese foreign ministry spokesperson Lijian Zhao hit back at U.S. officials like Nunes who have blamed Chinese lack of transparency on the global severity of the disease the WHO last week declared to be a pandemic.

"We hope certain US officials could focus on domestic response & international cooperation instead of trying to shift the blame to China by denigrating Chinese efforts to fight the epidemic. This is immoral & irresponsible, & will not help mitigate COVID-19 in US," he tweeted.

But that has not stopped U.S. officials like Rep. Paul Gosar, R-Ariz., House Minority Leader Kevin McCarthy, R-Calif., Sen. Tom Cotton, R-Ark., and Secretary of State Mike Pompeo from using the terms "Wuhan virus" or "Chinese coronavirus" in their public statements on the disease.

These comments come as the Chinese government has already published a book touting its handling of the coronavirus in what has become a high-stakes PR campaign to protect the nation's reputation on a global scale.

Trump National Security Adviser Robert O'Brien did not hold back in Wednesday comments on China's responsibility for the disease.

"Unfortunately, rather than using best practices, this outbreak in Wuhan was covered up," O'Brien said at the Heritage Foundation, a conservative-leaning think tank in Washington. "There's lots of open-source reporting from China, from Chinese nationals, that the doctors involved were either silenced or put in isolation, or that sort of thing, so that the word of this virus could not get out. It probably cost the world community two months."