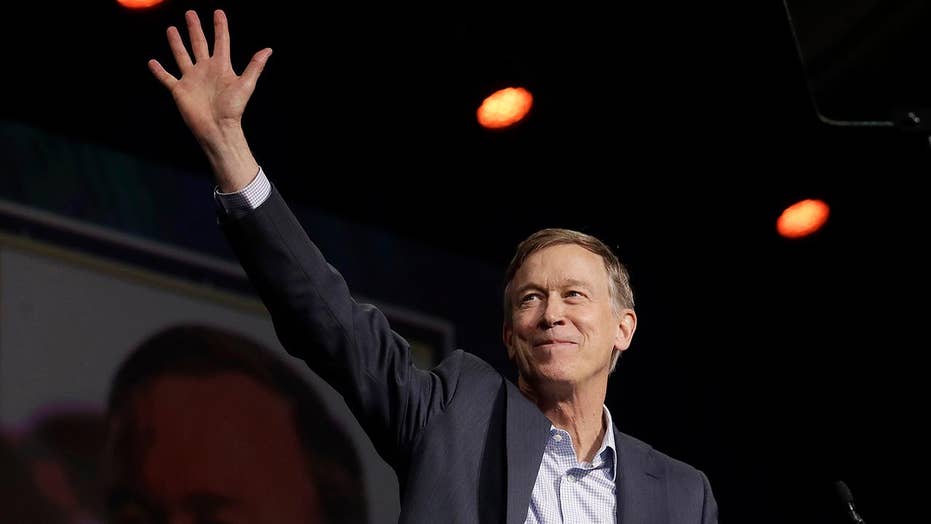 2020 Democrat hopefuls booed at California convention for criticizing socialism, 'Medicare for All'

Should moderates be concerned by the reception given to John Hickenlooper and John Delaney?

"No means no!" Omar said, using the language surrounding consent.

She was responding to former Rep. John Delaney, D-Md., who pushed to debate Ocasio-Cortez after she told him to "sashay away" from the 2020 field, citing his position on "Medicare-for-all"

Delaney appeared to provoke the ire of California Democrats on Saturday when he told the state's Democratic convention that "Medicare-for-all" was bad policy.

When Ocasio-Cortez, a prominent "Medicare-for-all" supporter, criticized Delaney's statement, he requested a debate with the progressive congresswoman.

Her refusal prompted the response that Omar blasted on Wednesday. "At a minimum, we have to be tolerant of different views on achieving the same goal: universal healthcare," Delaney tweeted, alongside an article about Ocasio-Cortez's refusal.

"That's why I responded to @aoc tweet with a debate offer. This isn't about slogans - people's lives are at stake. We need debates and the truth."

"AOC and Rep Omar are incredibly intelligent women and rising stars inside of the Democratic party. Instead of tweeting at our campaign and taking pot shots, we should be sitting down and talking about the best path forward," said Michael Starr Hopkins, the Delaney campaign's national press secretary. "We’re on the same team. It’s okay to disagree, but refusing to have a substantive conversation helps no one, especially not the Americans who so desperately need us to solve this healthcare crisis."

Delaney, on Wednesday, also lamented the Democratic Party's "intolerance to different ideas." He told Fox News that "Medicare-for-all" made it difficult for Democrats to beat Trump in 2020.

Their exchange came as 2020 Democrats faced scrutiny over how they would pay for the program as well as whether or not it would kick millions off of their private health insurance plans.

Sen. Bernie Sanders, I-Vt., an ally of Ocasio-Cortez, said at the end of May that he would likely pay for the program with a progressive income tax increase and a payroll tax on employers. The program has been estimated to cost more than $30 trillion, according to two right-leaning think tanks that looked at the issue.

The Trump administration has blasted the proposal as "the biggest threat to the American health care system."