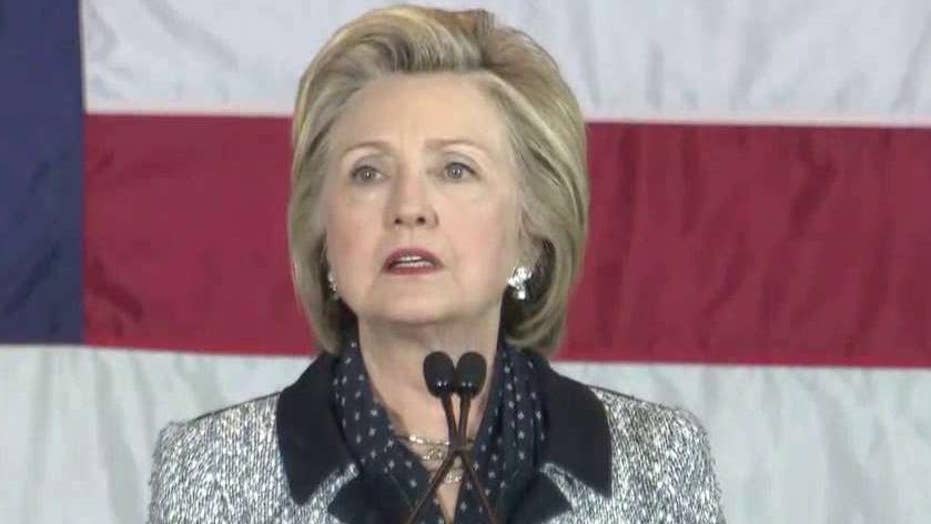 Clinton blasts Trump for his rhetoric against Obama

Hillary said the country cannot afford a conspiracy theorist for president; Jennifer Griffin has the story for 'Special Report'

NEW POLL SHOWS HILLARY AHEAD, BUT UNDERWATER ON SECURITY
Despite all the media criticism of Donald Trump’s rhetoric in the wake of the Orlando massacre, the presumptive Republican nominee still holds an powerful ace: he leads his Democratic opponent when asked who better handles terrorism according to a new Bloomberg poll.

While the poll, taken after criticism intensified over Trump’s charges of bias over the Mexican heritage of the judge overseeing the Trump University case, shows that Trump’s Democratic opponent, Hillary Clinton, has opened up a 12-point lead in a head-to-head matchup. But on the issues relating to terrorism and Orlando, Clinton underperforms.

Terrorism and national security have been Trump’s main campaign agenda from the start. His oft-repeated promise to build a wall on the U.S.-Mexican border, and enforce a ban on Muslims entering the U.S. have been widely condemned, even by many in the GOP.  But it’s also those same statements that have given voters the perception of Trump’s strength on issues that touch on security.

Clinton, meanwhile, is in the position of pushing a narrative that mirrors her former boss’s national security policy, a policy highly criticized for its infectiveness in combating ISIS. She’s also in a bind between Democrats who already think she’s too hawkish and those who think attacks like Orlando call for an increased focus on security.

And as the two tussle over the issue a key voting group, women, will be watching their responses closely. In the early 2000s a group of women started voting for candidates that seemed stronger on national security and combating terrorism and were dubbed Security Moms. With the rise of ISIS and the increased frequency of lone wolf attacks there’s a potential for this bloc to resurge and give Trump the edge as women tend to rank national security among their top issues when choosing a candidate.

But a new WaPo/ABC News poll, conducted before the Orlando attacks, show Clinton has little to fear. Trump’s unfavorables among women are at 77 percent, a 12-point jump from last month’s poll meaning if there are Security Moms out there they don’t seem to be making a big difference, yet.

As long as terrorism dominates the news cycle, however, Clinton will be in danger of appearing to re-sell a policy that shows little evidence of stemming attacks both home and abroad. She will need to craft a careful narrative that casts her as the cerebral strength of foreign policy and paints Trump as outlandish. When it comes to security however, what may be portrayed as extreme may be well be translated as decisive for this electorate.

TIME OUT
Etiquette aside, The Atlantic observes that diving into your smartphone in a social situation, also known as “phubbing” (phone + snubbing) is the new normal. Among the findings of a new study looking at what motivates us to phub: “[T]he people most likely to be glued to a screen while surrounded by friends were low in self-control, high in FOMO [fear of missing out], and higher on the scales for internet and smartphone addiction….The most interesting thing this study found was that people who reported phubbing more often were also more likely to be phubbed themselves. The authors, from the University of Kent, suggest several possible reasons for this. One is a simple retaliation—if you’re trying to talk to someone, and they’re on their phone, well, two can play at that game.”

TOP REPUBLICANS JOIN OBAMA, CLINTON IN CHIDING TRUMP
WaPo: “Top Republicans joined with President Obama and other Democrats Tuesday in sharply condemning Donald Trump’s reaction to the nightclub massacre in Orlando, decrying his anti-Muslim rhetoric and his questioning of Obama’s allegiances as divisive and out of step with America’s values. Trump — who just a week ago signaled an intent to snap his campaign into a more measured tone for the general election — showed no sign of backing down from his suggestions that Obama was somehow connected to or sympathetic with terrorists, telling the Associated Press that the president ‘continues to prioritize our enemy’ over Americans.

In separate appearances, both Obama and his potential successor, likely Democratic nominee Hillary Clinton, blasted Trump’s proposal to ban foreign Muslims from the United States as dangerous and contrary to the nation’s traditions…House Speaker Paul D. Ryan (Wis.) denounced Trump for trying to rally support for his anti-Muslim policies, while others castigated Trump for the accusations he has lobbed at Obama.”

Ponzi schemer pledges $50 million to help Trump - WashEx: “Convicted Ponzi schemer Steven Hoffenberg filed a Federal Election Commission report Tuesday stating his super PAC intends to coordinate a $50 million marketing campaign in support of Donald Trump. It’s the first time the chairman of TowerInvestors.com and former New York Post owner has explained why he founded the Get Our Jobs Back Inc. PAC in April. The FEC filings indicate the Statware Inc. company plan to make a donation of $50 million in services ranging from ‘digital media marketing’ to ‘revenue sharing,’ according to Politico. It’s pennies in the bucket for Hoffenberg, who in late May predicted his PAC would raise $1 billion dollars for Trump.”

AFTER D.C. PRIMARY VICTORY TUESDAY, HILLARY MEETS WITH BERNIE
Fox News: “Presumptive presidential nominee Hillary Clinton defeated Sen. Bernie Sanders on Tuesday in the Washington, D.C., Democratic primary -- marking the end of the presidential primary season and bringing the two candidates together for a face-to-face meeting to discuss what’s next for the party in the general election. The Associated Press said with 99 percent of the precincts reporting, Clinton has 74,566 votes, compared to 19,990 for Sanders. Neither candidate spoke to reporters Tuesday night after their roughly 90-minute meeting in a Washington hotel.”

AUDIBLE
“We have radical Christians, we’ve had people go into churches and kill people, Christians. And the President said radical Christian when he was describing that shooting. I would say that. I believe that they’re radical, that they’re very radical…” -- Sen. Joe Manchin, D-W.Va., on “Fox & Friends” explaining that there are radicals in every religion.

‘SMELL THE FORCE’
KSDK: “European perfume company Lifestyle Perfumes has released a line of Star Wars themed fragrances, included two colognes for men and one perfume for women. Because hey, everybody needs to smell nice when they escape down a trash chute. The men’s colognes are called ‘Empire’ and ‘Jedi,’ …According to the company’s website, ‘Empire’ will ‘cover you with an aura of masculinity and power’ and ‘capture the dark side of the Force.’ …The ‘Jedi’ scent, on the other hand, is ‘swaggering, fearless flair’ …Unfortunately for Rey fans, the female fragrance is called Amidala (but hey, great news for Natalie Portman fans). ‘Amidala inspired this fragrance through her royal elegance as well as her strong, indomitable will…’”