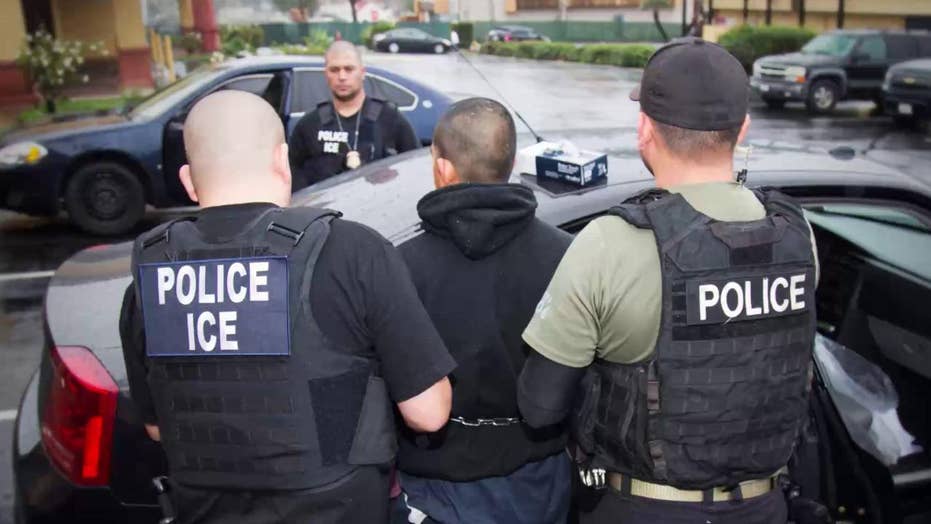 Democratic lawmakers and candidates are increasingly seeking the elimination of Immigration and Customs Enforcement (ICE). Here’s a look at some of the most prominent figures looking to dissolve the agency.

Democratic lawmakers and candidates are increasingly seeking the elimination of Immigration and Customs Enforcement as part of their suite of demands in D.C.'s heated border battle.

The calls reflect not only the deepening divide between the two partisan poles on immigration -- with one side seeking a border wall, and the other looking to dismantle the lead enforcement agency -- but the growing influence of the progressive wing.

More and more Democratic politicians have embraced such causes as 'Medicare for all' and a federal jobs guarantee. Now, they're getting behind the call to abolish ICE, with gusto.

Ocasio-Cortez ran on all three of those platforms, and even protested outside an ICE center in Texas.

Crowley had hardly used moderate language in his description of ICE, making do with calling it a “fascist” organization that needed to be put “back on its leash.”

But that stance apparently was not enough for Democratic primary voters, who overwhelmingly backed Ocasio-Cortez. In comments to CNN Wednesday morning after her primary win, she went even further and claimed ICE was running “black sites” at the border.

“Its extra-judicial nature is baked into the structure of the agency and that is why they are able to get away with black sites at our border, with the separation of children,” she said.

The focus on ICE comes in the wake of the controversy over the Trump administration’s “zero tolerance” policy, which called for all illegal border crossers to be prosecuted. This in turn led to the separation of families due to longstanding detention rules, until President Trump signed an executive order last week ordering families be detained together.

With that controversy in the headlines, the abolition of ICE -- which has long been the purview of far-left sections of the Democratic Party base advocating for open borders and no deportations -- has moved from being a slogan on protest placards to an idea being mulled by rumored 2020 hopefuls.

On the East Coast, New York Gov. Andrew Cuomo is coming under heavy pressure from the left to call for the elimination of ICE, particularly amid a far-left challenge from actress and activist Cynthia Nixon -- who called it a terrorist organization.

“ICE has strayed so far away from its mission. It is supposed to be here to keep Americans safe but what it has turned into, frankly, is a terrorist organization of its own that is terrorizing people who are coming to this country,” she said, according to NY1 News.

While Cuomo has not called for abolishing the agency, he accused ICE in April of engaging in an “assault on our democracy” for its raids in the state and issued a cease-and-desist letter.

"The reckless and unconstitutional practices ICE is deploying in our communities violate everything we believe in New York and are an assault on our democracy," Cuomo said.

On the West Coast, Sen. Kamala Harris, D-Calif., who has been floated as a 2020 Democratic contender, said that the U.S. should consider “starting from scratch” for ICE -- though stopped short of calling to abolish it.

“There’s no question that we’ve got to critically re-examine ICE and its role, and the way that it is being administered, and the work it is doing,” Harris said on NBC’s "Meet the Press" Sunday. “And we need to probably think about starting from scratch.”

In Oregon, Rep. Earl Blumenauer, who voted against the agency’s creation in 2002, doubled down on his opposition in a recent Medium post in which he called for it to be shut down.

“We should abolish ICE and start over, focusing on our priorities to protect our families and our borders in a humane and thoughtful fashion,” he said.

Rep. Mark Pocan, D-Wis., announced Monday that he will introduce a bill to abolish the agency, set up during President George W. Bush’s administration in the wake of 9/11.

“I’m introducing legislation that would abolish ICE and crack down on the agency’s blanket directive to target and round up individuals and families,” Pocan said in a statement. “The heartless actions of this abused agency do not represent the values of our nation and the U.S. must develop a more humane immigration system, one that treats every person with dignity and respect.”

The shift to the left on immigration has some Republicans and conservatives delighted, thinking that it may move Democrats into unelectable territory.

“Please, Democrats, make ‘Abolish ICE’ the focus of your campaign this fall!” tweeted Mark Krikorian, head of the Center for Immigration Studies which advocates for tighter immigration restrictions.

While calls to abolish ICE may sit well in New York City and Los Angeles, it is unclear how such calls would play in states like Pennsylvania, Ohio and Michigan -- where voters backed a hardline immigration policy with President Trump in 2016.

In Florida, Democrats running against Republican Reps. Carlos Curbelo and Mario Diaz-Balart have shied away from embracing the ICE talking point.

"Abolishing ICE is not the answer," Democrat Debbie Mucarsel-Powell, who is running against Curbelo, said, according to McClatchy. "I believe the agency must correct its abuses and should dedicate its staff to protecting the country from actual threats, like child exploitation, human trafficking and drug-related crimes, instead of attempting to induce fear in immigrant communities."

But in the Democratic primary for Republican Rep. Ileana Ros-Lehtinen’s seat, candidate Matt Haggman has repeatedly called to abolish the agency.

Haggman told Fox News’ Tucker Carlson last week that the agency needs to be replaced with something that would do more than simply focus on enforcement, although he wouldn’t say exactly what that would be.

“The way we had it before under [the now-defunct Immigration and Naturalization Service], something like that, we can enforce our immigration laws through another mechanism, not ICE which is out of hand,” he said.

Some Democratic leaders, though, have continued to stress a need for border security.

“Open borders, @realDonaldTrump?" he tweeted. “The bipartisan immigration bill I authored had $40 billion for border security and would have been far more effective than the wall.”