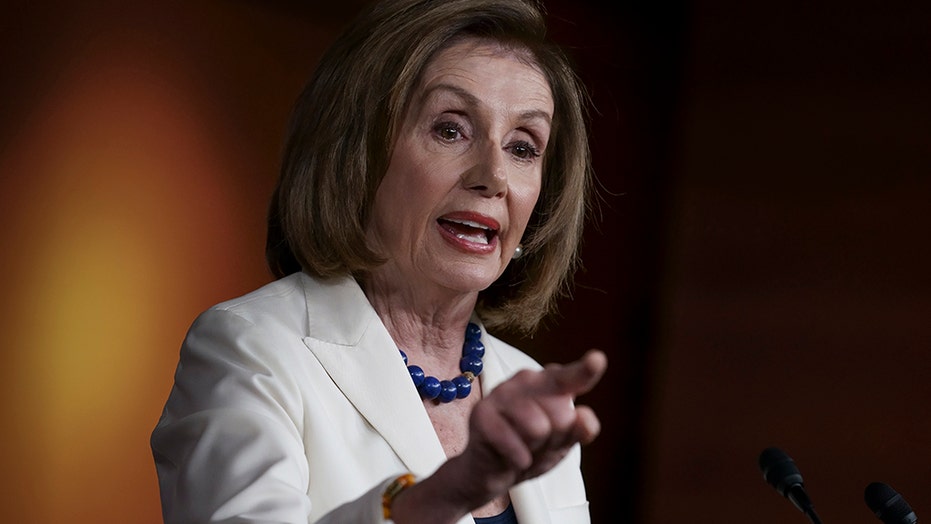 “I have, unfortunately, responsibilities to save our country from peril,” the Speaker declared. “My family will enjoy our season tickets at the 49ers game.”

Pelosi’s about as big a sports fan as there is. A few Octobers ago, the Speaker went to see the San Francisco 49ers play a game in the afternoon and then watched the San Francisco Giants appear in the World Series that night. Pelosi keeps balls and bats signed by Giants’ Hall of Famer Willie Mays in her office. She spoke recently about attending the 2018 funeral of the late 49ers wide receiver Dwight Clark – immortalized in San Francisco sports lore for “The Catch” in the 1981 NFC Championship Game.

TREY GOWDY ON IMPEACHMENT: 'THERE IS NO MATHEMATICAL WAY' TRUMP WILL BE CONVICTED AND DEMOCRATS KNOW IT

Speaker of the House Nancy Pelosi, D-Calif., responds forcefully to a question from a reporter who asked if she hated President Trump, after announcing earlier that the House is moving forward to draft articles of impeachment against Trump, at the Capitol in Washington, Thursday, Dec. 5, 2019. (AP Photo/J. Scott Applewhite)

But despite Pelosi’s absence this Saturday at Levi’s Stadium, all Pelosi seems to discuss these days is “the arena.”

Pelosi insists that Senate Majority Leader Mitch McConnell (R-KY) first outline the framework for a Senate trial before the House will fork over the impeachment articles.

“It is important that he immediately publish his resolution, so that, as I have said before, we can see the arena in which we will be participating, appoint managers and transmit the articles to the Senate,” wrote Pelosi in a letter to Democrat colleagues earlier this week.

“I said when we saw the arena….then we would send over the articles,” said Pelosi when asked about impeachment outside the House chamber Wednesday.

At her Thursday press conference, Pelosi likened her decision as to who may serve as House impeachment managers – charged with presenting the impeachment case to the Senate – to a football game. The Speaker fashioned herself as head coach.

“Getting back to sports, because that’s all we live, right? Football. College. High school. Professional. Do we send our team or do we have to send in special teams?” asked Pelosi.

In other words, will McConnell structure the Senate trial suited best for old school football and the likes of Bronko Nagurski, Red Grange and George Halas? Or will this trial require “special teams?” A holder, long snapper, upback, gunner and jammer? Is this “arena” Candlestick Park, the old Oakland-Alameda County Coliseum or Kezar Stadium?

It’s been more than three weeks since the House impeached President Trump. Some Democrats are antsy about Pelosi dispatching the articles to the Senate to start the trial.

“I think we are reaching a point where the articles of impeachment should be sent and we should have votes on when the witnesses would be called,” said Sen. Richard Blumenthal (D-CT). “The cover-up that Sen. McConnell’s engineering here has to be broken at some point.”

“I think it was perfectly advisable for the Speaker to try to leverage that to get a better deal. At this point, it doesn’t look like that’s going to happen. And yes, I think it is time to send the impeachment articles to the Senate and let Mitch McConnell be responsible for the fairness of the trial.”

A few Democratic sources observed some Democrats may be trying subtly – or not so subtly – to convince Pelosi to advance the articles to the Senate. One Democratic source reminded Fox that Pelosi has a long memory – and takes note of who crosses her.

Shortly after speaking on CNN, Smith backpedaled on Twitter.

“I misspoke this morning,” tweeted Smith. “If the Speaker believes that holding on to the articles for a longer time will help force a fair trial in the Senate, then I wholeheartedly support that decision.”

GOP REP. MATT GAETZ EXPLAINS WHY HE VOTED FOR WAR POWERS RESOLUTION DESPITE HIS 'LOVE' FOR TRUMP

“I saw the way it was being reported on the news and I said ‘that is not what I wanted to convey,’” said Smith. He asked his aides to compose a retraction statement and even ran it by the Speaker’s office, first.

Democrats don’t like the fact that McConnell wants to mirror the model for a trial established in 1999 for President Clinton. In that trial, the prosecution and defense presented their cases first – with an option for witnesses later. All 100 senators agreed to that arrangement. But McConnell only needs a bare majority to approve a similar set-up. Democrats contend that a trial is of such great political magnitude that more senators should agree on the trial parameters than just a simple majority. But 51 votes are all McConnell needs.

So, if the die is cast, how long can Pelosi hold the articles?

“I’m not holding them indefinitely,” said the Speaker. “I’ll send them over when I’m ready. That will be probably be soon.”

McConnell dared the Speaker to clutch the articles a little longer.

“If the Speaker continues to refuse to take her own accusations to trial, the Senate will move forward next week with our business of the people,” said the Kentucky Republican.

Pelosi chortled at McConnell’s suggestion, sarcastically asking if the Senate would sync up with the House and adopt the USMCA.

But by mid-afternoon, McConnell told Republican senators he expected a trial to begin next week – even though he had no direct evidence as to why.

The House published its schedule for Friday late Thursday night. The official docket is bereft of the impeachment provision in question. If greenlighted by Pelosi, the impeachment resolution would prompt a short debate. The House would then vote on the plan to name impeachment managers and send the articles to the Senate. But even though impeachment isn’t on the schedule, Democrats drafted the impeachment language in such a way to come up at a moment’s notice.

So, everyone is watching Pelosi. Does she move Friday? Over the weekend? Early next week? It’s reminiscent of the speculation in the fall of 2010. The Capitol buzzed with conjecture that Pelosi may retire after Democrats lost the House. Pelosi never budged.

Everyone is trained on Pelosi again. The Senate may be the next arena. But for now, everyone is trying to decipher the Speaker’s impeachment game.