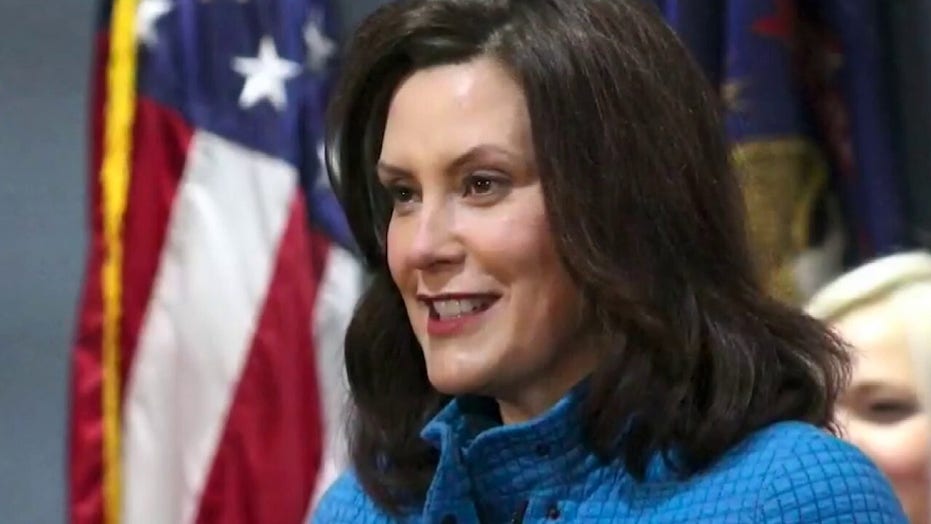 Democratic Michigan Governor Gretchen Whitmer engages in a rhetorical fight with President Trump over coronavirus restrictions and may be on Biden’s radar as a potential running mate, all during a massive flood; Matt Finn reports.

Michigan GOP state Sen. Tom Barrett claimed Tuesday that Gov. Gretchen Whitmer and her staff "duped" him "into a cover-up" after the governor's office "adamantly denied" that Whitmer's husband had tried to use her position to convince a dock company to quickly get the family's boat on the water ahead of the Memorial Day weekend amid the coronavirus pandemic.

Barrett, in an interview with Fox News, said that over the weekend he initially heard a story on Facebook about someone purportedly calling NorthShore Dock LLC, a company that reportedly stores the family's boat, and mentioning that he is married to Whitmer in an effort to get the boat on the water soon. (The governor's husband is Marc Mallory.) He says that Whitmer's office initially denied that the story was true and pressured him into taking down his own post on the matter, but that he later determined the story was accurate.

Indeed, Whitmer essentially acknowledged the incident during a press conference Tuesday afternoon, while insisting her husband made the comment in jest.

"My husband made a failed attempt at humor last week when checking in with a small business that helps with our boat and dock up north," she said. "Knowing it wouldn’t make a difference, he jokingly asked if being married to me might move him up in the queue. Obviously, with the motorized boating prohibition in our early days of COVID-19, he thought it might get a laugh. It didn’t. And to be honest, I wasn’t laughing either when it was relayed to me. Because I knew how it would be perceived."

She added, "He regrets it. I wish it wouldn’t have happened. And that’s really all we have to say about it."

Whitmer spokeswoman Tiffany Brown in an earlier comment to Fox News did not deny that Mallory invoked his relationship with the governor in the alleged call, though did not confirm it, either.

Whitmer's office did not respond to a request for comment from Fox News on Barrett's allegation that it tricked Barrett into becoming a part of a "cover-up" of the story.

Barrett said that he composed a Facebook post blowing the whistle on the situation on Friday after checking into the veracity of the story, which was first shared in a Facebook post that is no longer public by NorthShore Dock LLC's owner Tad Dowker.

But late Friday night, Barrett says, a representative from the governor's office called the Michigan Senate Majority Leader's office to pressure him into taking down the post -- saying that the story was incorrect.

A screenshot of the original Facebook post by NorthShore Dock LLC owner Tad Dowker regarding an apparent phone call from Michigan Gov. Gretchen Whitmer's husband. Whitmer's office has not publicly denied the allegation.

"I had posted this thing and had about 500 shares already on Facebook in a few hours," Barrett said. Then the governor's office contacted Michigan Senate Majority Leader Mike Shirkey, a Republican, to reach out to Barrett to remove the post about Whitmer's husband.

"They were specifically requesting ... that my posts be taken down because they were insisting that wasn't true," Barrett told Fox News. "They insisted that it was a fabricated story."

He continued: "I felt at that point that I had an obligation to reverify everything that I've been told... So I made the decision, out of an abundance of caution, to take the post down while I worked on revalidating everything."

The next morning, Barrett checked the story that he had initially posted and said that it was actually correct. He didn't repost it but said that he told the governor's office that "I was extremely annoyed and frustrated and disappointed that they would lie to me like that. And that I would never ever in my life, give them the benefit of the doubt again."

But by Saturday evening, the marina put out a public statement that basically backed the initial post from Dowker.

As The Detroit News first reported, the post read: "After a long day of keeping crews running, adhering to the additional safety regulations that need to be in place to operate our small business and fielding calls from customers frustrated with our lagging installation schedule I was told the governor's husband called asking for install availability... Up until this point we, as a company, had no idea we installed their dock or boat."

Michigan state Sen. Tom Barrett alleged that Gov. Gretchen Whitmer pressured him into taking down an accurate Facebook post about her husband invoking her office to try to get preferential service from a marina in the northern parts of the state. (Official)

That's when Barrett said he went to the press.

“They basically corroborated the statement from the original post. And once that was public I felt then I could publicly express the fact that the governor's office duped me into a cover-up of their situation," Barrett said. "And then I contacted the Detroit News.”

Barrett said that the combination of the governor's family's purported plan to spend a day boating in the northern reaches of the state -- something that is not technically against the state's current coronavirus orders but had been discouraged by Whitmer herself -- and then allegedly misleading him merits an apology, and perhaps an investigation.

"I think the governor owes us an apology," Barrett said. "I think we got to somehow restore credibility in the office of the governor in the state of Michigan."

On an investigation: "I think it depends on if the governor did use her taxpayer-funded staff to try and extract the cover-up of the whole thing," Barrett said.

Republican Michigan state Rep. Matt Hall, the chairman of the state's House Oversight Committee, told Fox News Monday that the Whitmer boat issue is not a top priority for his committee. Hall said that he is more focused on Whitmer's "bungled" disaster declaration with the Trump administration, and other apparent missteps in her response to the coronavirus pandemic.

"I would say it's not a top priority for me because it's still kind of in the beginning phases," Hall said. "And what I'm really focused on is, number one, the unemployment issue in Michigan."

Whitmer's purported attempt to set up a trip to the northern parts of the state drew scorn from Michigan Republican Party Chairwoman Laura Cox.

"Do as I say, not as I do," Cox said in a Tuesday tweet. "Being a public official should not make you exempt from your own rules — or grant you preferential treatments. Gov. Whitmer should at least do kind by the business by confirming the story so they don't look like liars."

The vacation property Whitmer and her husband own is about 25 minutes from Traverse City, according to The Detroit News, but the family permanently resides in Lansing, over 150 miles away. NorthShore has several locations near Traverse City.

State Rep. Triston Cole, the GOP lawmaker whose district includes the boat storage facility and Whitmer’s cottage, said there’s a lot of frustration in northern Michigan because stay-home orders have meant marina facilities have a huge backlog of getting boats out of storage. Some families are worried they may not get their boats in the water at all this summer and for the governor’s husband to allegedly try to pull rank has added to the frustration, Cole said.

“The line is absolutely exponentially long because of…his wife,” Cole told Fox News, citing the stay-home orders that didn’t allow for marina facilities to prepare for the summer rush. “I wish that the governor or the governor's husband would just issue an apology and clear this up. And we can continue to move forward reopening our state … Oftentimes the cover-up is by far worse than what actually happened.”

Whitmer's coronavirus orders have been some of the strictest in the nation, and over the weekend she extended her most recent order until June 12. She has also dismissed numerous protests against the orders as politically motivated.

“There is a lot of politics at play here, unfortunately,” Whitmer told Fox News. “The protests are very political in nature instead of being focused on the stay-at-home order.”

She added: “But I’ve been focused on doing my job, and I’m going to keep doing that and I’m not going to apologize about that. I’m not changing the way I run this state because of some protests."