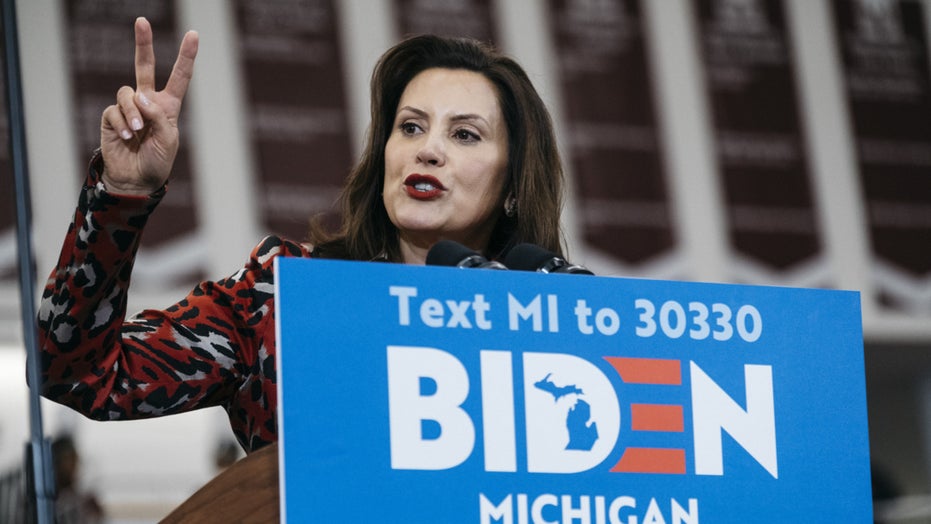 Gov. Gretchen Whitmer of Michigan’s national profile has dramatically risen the past six weeks. As the governor of one of the state’s hardest hit by the coronavirus, she’s been in the national spotlight since the outbreak of the pandemic in March.

And presumptive Democratic presidential nominee Joe Biden has confirmed that the 48-year-old first-term governor and rising political star is on his list of potential running mates.

“Gov. Whitmer is an outstanding governor. She is one of the most talented people in the country in my view,” Biden said in early April as the former vice president introduced the governor on the second edition of his newly launched podcast series. “She also is a supporter. She was also a co-chair of my campaign. She’s a good friend, but she has been laser-focused, laser-focused on delivering for her state.”

Here are five things to know about one of the contenders in the 2020 veepstakes.

She’s tangled with President Trump over the coronavirus

As a frequent guest on national media in over the past month, Whitmer has criticized the federal response while pleading for ventilators, personal protection equipment and test kits as Michigan has emerged as one of the hardest-hit states. Republicans were especially upset after she implied during an interview that the Trump administration was intentionally withholding medical supplies from Michigan.

President Trump fired back, calling her “Gretchen ‘Half’ Whitmer,” charging that she was in “way over her head” and “doesn’t have a clue” about how to handle the health crisis. Two days earlier, Trump said he had instructed Vice President Mike Pence, the leader of the White House pandemic response, not to call “the woman in Michigan.”

But Trump has since deleted the tweet and said soon after that he had a productive conversation with Whitmer. The governor also backed away from feuding with the president as the state grapples with the escalating crisis.

She’s been in the political spotlight before

In February, Whitmer was tapped by Democrats to deliver the party’s official response to President Trump’s State of the Union address – a move that signaled her rise within the party and the importance that Democrats placed on winning Michigan in the November general election.

In her response, she pivoted from Trump’s impeachment to issues concerning working-class voters, including health care, and made only passing references to his behavior.

Her first appearance in the national spotlight

Back in 2013, when she was Michigan’s Senate minority leader, Whitmer gave a powerful testimony about her personal experience of sexual assault 20 years before while denouncing anti-abortion legislation passed by her Republican colleagues.

“Over 20 years ago, I was a victim of rape and, thank God, it didn’t result in a pregnancy from an attacker,” she said. “As a mother with two girls, the thought that they would ever go through something like I did keeps me up at night.”

The legislation in question banned all public and private insurance plans in the state from covering abortion. While testifying against the measure, then-state Sen. Whitmer abandoned her prepared remarks to share her experience.

Whitmer was first elected to the state House of Representatives in 2000. She won election to the state Senate in 2006, winning re-election in 2010. When her Democratic colleagues unanimously chose her to be Senate Democratic Leader in 2011, she made history as the first woman in Michigan to lead a party caucus in the state Senate. Term limits prevented her from running for a third term.

In 2016, Michigan's 30th Judicial Circuit Court unanimously selected Whitmer to serve the final 6 months of the term of the outgoing Ingham County prosecutor, after he was arrested and charged with 11 counts of involvement with a prostitute and four counts of willful neglect of duty.

She has plenty of political pedigree

It’s not a huge shock that Whitmer entered elective politics. She grew up in a family where politics were front and center. Her mother worked under Democratic Michigan Attorney General Frank Kelley as an assistant attorney general. Her father served under Republican Governor William Milliken as the head of the Michigan State Department of Commerce. He was also the CEO of Blue Cross Blue Shield of Michigan.