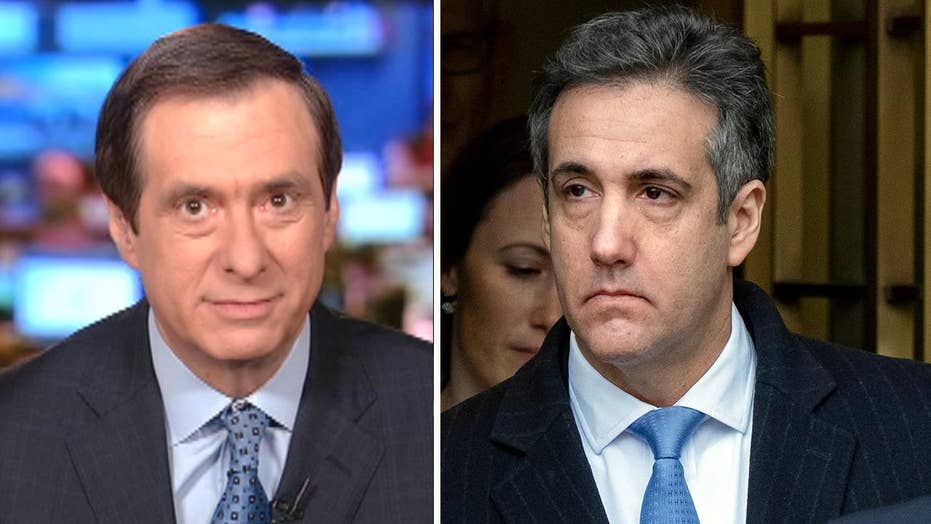 It was a classic split-screen moment for the media.

Actually, it called for triple screens.

President Trump had landed in Vietnam for his summit with Kim Jong Un. This second meeting will put to the test whether North Korea actually plans to take any concrete steps toward giving up nuclear weapons, or whether its dictator is merely pursuing a strategy of deflection and delay. At stake: the potential elimination of one of the world's premier nuclear threats, and a possible peace treaty more than six decades after the Korean War armistice.

But that was no match for Michael Cohen.

The president's onetime lawyer had arrived in the Senate yesterday to testify behind closed doors, a prelude to his televised House hearing today.

MSNBC literally had a split-screen shot of Trump getting off the plane in Hanoi and Cohen walking down a Capitol Hill hallway.

CNN had a countdown clock up, 23 hours before his public testimony.

Cohen was already making news as the gist of his planned testimony was provided in advance to major news organizations. And that gave his story, well, a nuclear boost.

Cohen, The New York Times said, "is planning on portraying his onetime client in starkly negative terms when he testifies Wednesday before a House committee, and on describing what he says was Mr. Trump's use of racist language, lies about his wealth and possible criminal conduct."

Cohen, The Washington Post said, "is expected to describe to lawmakers what he views as Trump's 'lies, racism and cheating,' both as president and in private business, and will describe 'personal, behind-the-scenes' interactions he witnessed, a person familiar with the matter said."

And even while the president was halfway around the world, his White House was playing defense on the other story with a statement from Sarah Sanders:

"Disgraced felon Michael Cohen is going to prison for lying to Congress and making other false statements. Sadly, he will go before Congress this week and we can expect more of the same. It's laughable that anyone would take a convicted liar like Cohen at his word, and pathetic to see him given yet another opportunity to spread his lies."

What's fascinating about that statement is that it's the Republican chairman of the Senate Intel committee, Richard Burr, who summoned Cohen. And Robert Mueller is relying on Cohen's accounts as well.

Of course, Cohen's credibility will come under withering assault, since he pleaded guilty to lying to Congress. That's part of the reason that Cohen will begin a three-year prison term in May, though he may hope his testimony prompts prosecutors to ask for a sentence reduction.

Cohen's effort at rehabilitating his image is simple: I lied before to protect my client, but I deeply regret it and am so upset by Trump's conduct as president that I'm going to tell all now.

RNC TELLS MICHAEL COHEN TO 'HAVE FUN IN PRISON,' AS GOP READIES WAR ROOM TO PUSH BACK ON TESTIMONY

Among his topics, according to the advance leaks: the infamous Trump Tower meeting with a Russian lawyer, and the president's involvement in hush-money payments to Stormy Daniels and Karen McDougal.

His lawyer, Lanny Davis, told the Times that he will "back it up with documents."

But Cohen does not plan to answer questions about other aspects of the Russia investigation to avoid interfering with the Mueller probe.

What the Post described as the hope of Cohen's allies — that "he could become this generation's John Dean" — very much remains to be seen. Dean, unlike Cohen, worked in the White House and was an integral part of Richard Nixon's Watergate coverup.

The third story unfolding on our screens yesterday was Nancy Pelosi's plan for the House to vote on blocking Trump's declaration of a national emergency at the border. So while he's performing on the world stage, he could get whacked here at home for supposedly flouting the Constitution.

By the time the House voted to block Trump 245-182, with 13 Republicans joining the Dems, the party-line tally was a foregone conclusion. There is a chance that the Senate will go along with four Republicans defecting (Thom Tillis said in a Post op-ed yesterday that he'd oppose the national emergency because "conservatives rightfully cried foul when President Barack Obama used executive action to completely bypass Congress"). Still, there undoubtedly wouldn't be enough votes to overturn a veto.

Of course, the summit meeting with Kim hadn't actually begun when these other stories were grabbing ink and airtime. But I can't help thinking that most of the media are more interested in Trump's former fixer and a potential Democratic slapdown than in this president's diplomacy.