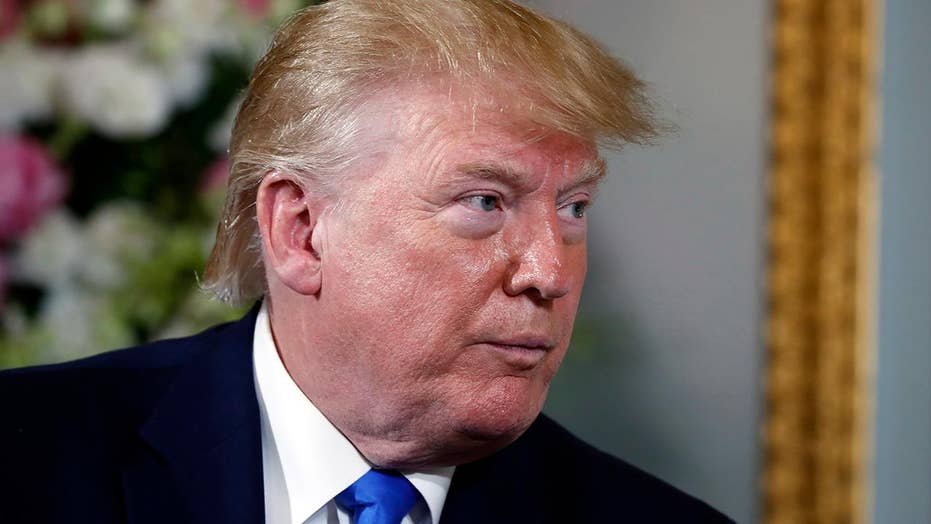 U.S. and Mexican officials meet in Washington on tariffs and immigration; Rich Edson reports from the State Department.

With just days to go until the Trump administration is set to impose punishing tariffs on Mexico unless the country halts the unprecedented flow of illegal immigrants across the southern border, numerous signs that Mexico would capitulate emerged Thursday -- but it remained unclear Friday morning whether their efforts would satisfy the White House.

Reports in the evening indicated that Mexico's negotiators with Washington have offered to immediately deploy 6,000 National Guard troops to the border with Guatemala. Additionally, Mexico has reportedly agreed to a major overhaul of reasonable asylum protocols, which would require asylum applicants to seek permanent refuge in the first country they arrive in after fleeing their home countries.

For virtually all Central American migrants, that country would not be the United States. The Trump administration has already begun requiring asylum applicants to wait in Mexico while their claims are processed, saying too many applicants were using the system fraudulently to escape into the country. Last month, the Ninth Circuit Court of Appeals denied a request to stop that practice temporarily.

However, two administration officials tell Fox News that while talks have been going well with Mexico, and that Mexico is making some fresh proposals, there is not yet a deal that U.S. officials are sure to imminently accept.

Also on Thursday, Mexico's financial intelligence agency announced it had frozen the bank accounts of 26 people who it claimed "have presumably participated in migrant smuggling and the organization of illegal migrant caravans."

The agency said it had detected money transfers from central Mexico to six Mexican border cities presumably related to the caravans.

Mexican President Andrés Manuel López Obrador insisted on Thursday that the Mexican government does not "act against anybody to please any foreign government."

Meanwhile, some 200 Mexican military police, immigration agents and federal police blocked the advance of about 1,000 Central American migrants who were walking north along a southern Mexico highway on Wednesday, once again showing a tougher new stance on attempts to use the country as a stepping-stone to the U.S.

The group of migrants, including many women and children, set out early from Ciudad Hidalgo at the Mexico-Guatemala border and was headed for Tapachula, the principal city in the region. State and local police accompanied the caravan.

The officials blocked the highway near the community of Metapa, about 11 miles from Tapachula.

Unarmed agents wrestled some migrants who resisted to the ground, but the vast majority complied and boarded buses or immigration agency vans. Some migrants fainted and fell to the ground. One young man who collapsed was taken for medical attention.

Vice President Mike Pence, monitoring the talks from his travels in Pennsylvania, said the U.S. was "encouraged" by Mexico's latest proposals but, so far, tariffs still were set to take effect Monday.

Trump, in announcing the tariffs last week, promised that they would swiftly increase if no action was taken. The president declared Wednesday evening that "not nearly enough" progress was being made in last-minute negotiations with Mexico.

"On June 10th, the United States will impose a 5% Tariff on all goods coming into our Country from Mexico, until such time as illegal migrants coming through Mexico, and into our Country, STOP," Trump said on May 30. "The Tariff will gradually increase until the Illegal Immigration problem is remedied, ... ..at which time the Tariffs will be removed. Details from the White House to follow."

Border Patrol has picked up the migrants caught on this tape.

Fox News is told the tariff on all goods by land, sea, and air from Mexico will hike to 10 percent on July 1 -- and potentially increase substantially from there.

The statement added: "Thousands of innocent lives are taken every year as a result of this lawless chaos.  It must end NOW! ... Mexico’s passive cooperation in allowing this mass incursion constitutes an emergency and extraordinary threat to the national security and economy of the United States."

Specifically, White House sources told Fox News that Mexico would need to step up security efforts on the border, target transnational smugglers, crack down on illicit bus lines and align with the U.S. on a workable asylum policy. Mexico could use certain so-called choke points on the southern border to curb illegal migration sharply, according to the sources.

Arrests along the southern border have skyrocketed in recent months, with border agents making more than 100,000 arrests or denials of entry in March, a 12-year high. Immigration courts that process asylum claims currently have faced a backlog of more than 800,000 cases and asylum applicants increasingly have been staying in the U.S. even after their claims for asylum have been denied.

More than 4,000 individuals have been apprehended at the border with children who are not their own in recent months, administration officials tell Fox News.

And, Customs and Border Protection said it apprehended or turned away over 109,000 migrants attempting to cross the border in April, the second month in a row the number has topped 100,000.

In a dramatic moment, more than 1,000 illegal immigrants were apprehended by border agents near the U.S.-Mexico border last week -- the largest ever group of migrants ever apprehended at a single time, sources told Fox News. The group of 1,036 illegal immigrants found in the El Paso sector included migrants from Guatemala, El Salvador and Honduras, according to sources.

The Trump administration has heavily focused on asylum law reforms, making the current reported Mexican overtures in that area particularly important. Asylum law, conservatives point out, is intended to shield individuals from near-certain death or persecution on account of limited factors like religious or political affiliation — not poor living conditions and economic despair.

Most asylum applicants are ultimately rejected for having an insufficient or unfounded personalized fear of persecution, following a full hearing of their case before an asylum officer or an immigration judge.