Senate Majority Leader Mitch McConnell, R-Ky., and Minority Leader Chuck Schumer, D-N.Y., on Tuesday blocked each other's resolutions -- one to condemn President Trump for his visit to St. John’s Church after federal law-enforcement officers in riot gear cleared protesters in Lafayette Square a day earlier, and one calling for peace and order.

“Congress condemns the president of the United States for ordering federal officers to use gas and rubber bullets against the Americans who were peaceably protesting in Lafayette Square,” the Schumer resolution read.

At the same time, Schumer blocked a resolution introduced by McConnell calling for order to be restored so that "the legitimate grievances of peaceful protesters may be heard and considered."

The McConnell resolution stated that the U.S. "cannot fully realize the constitutional promise of equal protection and equal justice under the law until unjust police violence against black Americans has been further addressed." At the same time, it asserted that Americans had no constitutional right to loot, burn or attack police officers.

There have been differing accounts about who gave the order to disperse the protesters Monday -- and why and how it was done.

Some vocal anti-Trump critics -- such as Episcopal bishop Mariann Budde, who oversees a church near the White House that caught fire during a protest -- claimed Trump himself "sanctioned" having the park cleared with tear gas so he could participate in a photo op at St. John's Church.

But the U.S. Park Police went on the record Tuesday to deny that tear gas was used, while also saying “violent protestors” began throwing projectiles including “bricks, frozen water bottles and caustic liquids” before officers dispersed the crowd.

A Justice Department (DOJ) official told Fox News on Tuesday that it was Attorney General William Barr who ordered law enforcement officials to extend the perimeter of Lafayette Square before Trump ventured outside the White House on Monday. 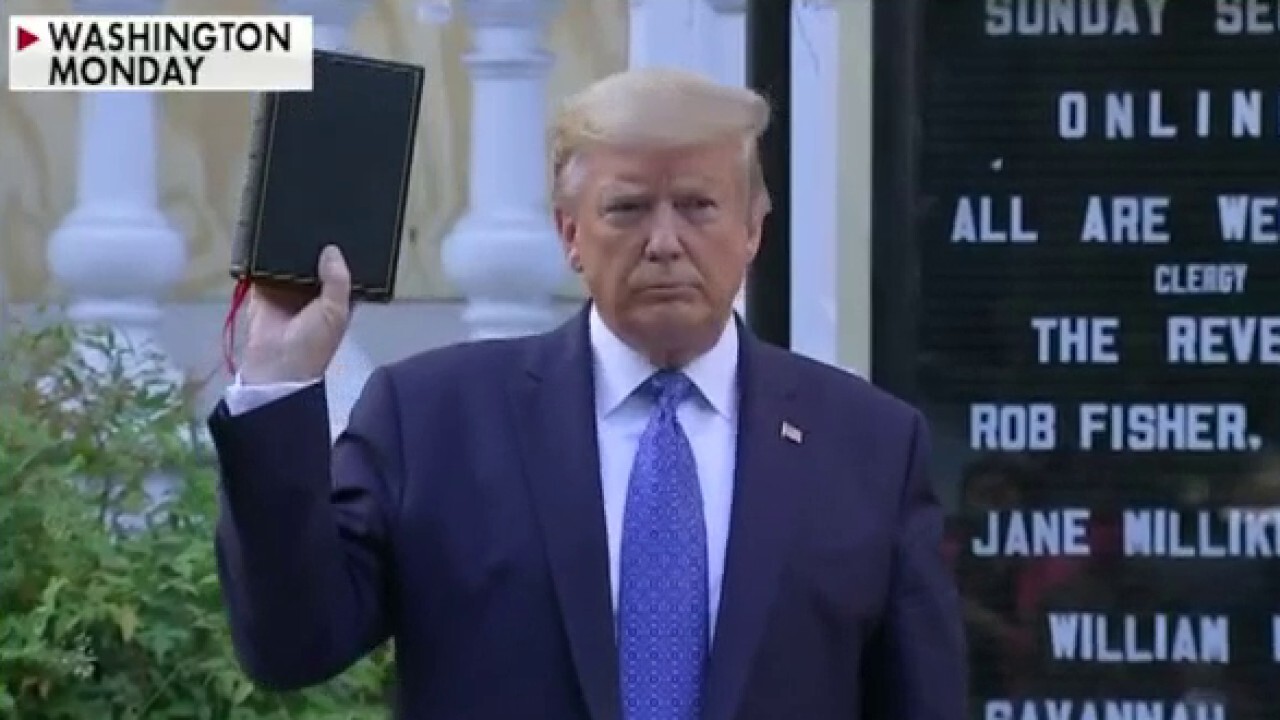 The order was executed Monday afternoon just minutes before the president gave a public address on the nationwide unrest following the death of George Floyd.

The act -- which came shortly before a city curfew went into effect -- has ignited outrage from critics who claim protesters were moved so the president could participate in a photo opportunity. A photo of Trump standing in front of the church holding a Bible in the air circulated shortly after.

But, the senior Justice Department official told Fox News the decision was made early Monday morning after the Treasury Department and St. John’s Church -- which are both in the area -- were vandalized the night before.

Barr went to survey the scene on Monday afternoon, according to an official. But after arriving, he was upset to find out the perimeter had not been widened like it was supposed to be earlier in the day, the source said. Barr, who was surrounded by his security detail, toured the police line keeping the protestors at bay while demonstrators shouted at him. The night before, fires were started and buildings were vandalized in the area.

Other top Democrats have been angered by the move. House Majority Leader Steny Hoyer, D-Md., called it an "action worthy of censure."